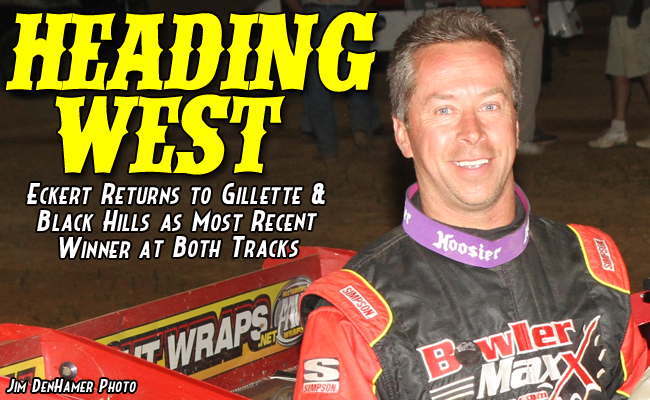 Rick Eckert may be more excited than anyone for the World of Outlaws Late Model Series to make its western most trip of the season for events this week at Gillette (Wyo.) Thunder Speedway and Black Hills Speedway in Rapid City, S.D.

That’s not surprising considering Eckert’s history at the two tracks. Eckert, the 2011 WoO LMS champion from York, Pa., is the most recent WoO LMS winner at both venues with victories at Gillette’s 3/8-mile oval in 2013 and the half-mile oval at Black Hills in 2012. He’ll look to continue his western success when the WoO LMS returns to Gillette on Tuesday and Black Hills on Wednesday as part of the five-race Wild West Tour.

“We’ve been pretty competitive at both places every time we’ve been there. Hopefully we can do it again,” said Eckert, the 49-year-old WoO LMS veteran who has been a regular on the nation tour since it was restarted under the World Racing Group banner in 2004. “They’re both fun racetracks. They’re total opposites – Black Hills is a real big place and Gillette is a little place. But they both get slick and race pretty well. Hopefully they’re both the same way this time out there and we can be on top of our game again.”

Eckert could use a couple strong runs after an up-and-down first half of the WoO LMS season. Driving the No. 7v Viper Risk Management-sponsored Paul Crowl Racing MasterSbilt ride he switched to for the 2015 season, Eckert has shown flashes of success that include a victory at Ponderosa Speedway in Junction City, Ky., on May 8 and a runner-up finish on the first night of the Firecracker 100 at Lernerville Speedway in Sarver, Pa., on June 25.

He has also struggled at times with 11 finishes outside the top 10, as he continues to adjust to both a new chassis brand and a new team. But Eckert is hopeful that the team has most of their growing pains behind them.

“Any time you make a lot of changes or start something new it’s going to be tough at first,” said Eckert, whose victory at Ponderosa marked his first win since his 2013 triumph at Gillette. “We ran second there the first night at Lernerville and then we ran 10th the second night. So we’ve showed some speed, but we haven’t showed a lot of consistency. We need to get consistent at being at fast.

“We’ve changed some stuff around the past couple weeks and I think it’s better. But every time I say that we don’t run better, so I’m not gonna say that just yet.”

Eckert’s inconsistent performances have dropped him to seventh in the current WoO LMS points standings – essentially out of championship contention. But with half of the season still remaining, including some major events coming up, Eckert is as motivated as ever to go out and win races. And his early exit from the title chase may actually help him do just that.

“If we can get consistently running good, there’s still a lot of money out there to be won,” Eckert said. “We’ve got no shot at the championship or anything, but that’s not always a bad thing. Sometimes when you’re still in the points battle, you’re reluctant to take chances on tire choices or adjustments. Where we’re at, we can afford to take any chance we need to right now and try to win us some races.”

Both Tuesday’s program at Gillette and Wednesday’s event at Black Hills will feature complete slates of WoO LMS action with hot laps, time trials, heat races, Last-Chance Showdowns and 40-lap A-Mains that pay $8,000 to the winners.

Gates open at 5 p.m. at both events with racing at 7. Advanced tickets can be purchased for either race for $25 at Tire Rama in Gillette or Black Hills Harley in Rapid City. Tickets are $30 on the day of each race with children 6 and under admitted for free. Call 605-209-2028 for more information.