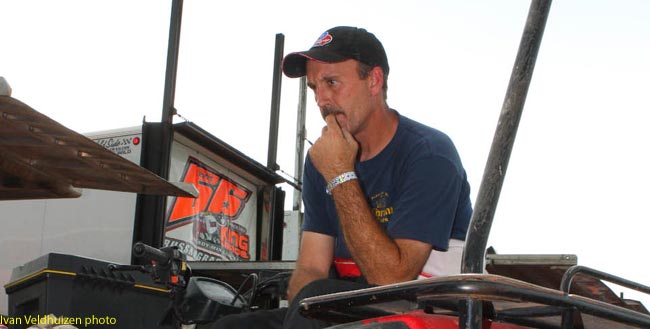 With Primary Sponsorship From Pennsy’s BPG Inc., Fuller Puts Together His Own Dirt Late Model Effort

Capping a whirlwind week that began with his decision to part ways with John Wight’s Gypsum Express team, Fuller announced on Monday that he has put together his own dirt Late Model effort with primary sponsorship assistance from Chad Sinon’s North Wales, Pa.-based BPG Inc. and will enter this weekend’s WoO LMS doubleheader at Hartford (Mich.) Motor Speedway (Fri., April 29) and Bluegrass Speedway in Bardstown, Ky. (Sat., April 30).

“This is a new chapter for me,” said Fuller, who switched his emphasis from DIRTcar big-block Modified competition to dirt Late Models in 2007 and won the WoO LMS Rookie of the Year award. “I’m back to being a car owner again.”

Fuller, 43, of Watertown, N.Y., had his 2011 plans to follow the WoO LMS for a fifth consecutive season thrown into disarray in March when Wight, who owns New York’s Brewerton and Fulton speedways in addition to a fleet of Modifieds and dirt Late Models, could not come to an agreement with World Racing Group officials to continue DIRTcar sanctioning of his tracks. The impasse between Wight and the WRG, which also operates the WoO LMS, ultimately prompted Wight to prohibit Fuller from entering Gypsum Express equipment in World of Outlaws events beyond the scheduled Illini 100 on April 1-2 at LaSalle (Ill.) Speedway.

With racing on the WoO LMS being key to his existence as a fulltime professional racer, Fuller sought other options to remain a tour regular. He found his savior in Blue Bell, Pa.’s Sinon, a longtime owner of big-block and 358-Modifieds that compete at tracks in eastern Pennsylvania and surrounding areas.

Sinon, 45, read about Fuller’s situation in an Area Auto Racing News article and decided to reach out to the New Yorker. A couple weeks later Sinon agreed to sign on as Fuller’s main benefactor, opening the door for Fuller to attempt his own WoO LMS assault.

“Chad was the key guy to allow me to buy a car and keep going on my own,” Fuller said of Sinon, who flirted with making a foray into dirt Late Model racing in the past (including some sponsorship conversations with Fuller a few years ago). “All I can say is that he made my 2011 a lot more promising than it was looking. I really had nowhere to turn until he called.

“He told me he just wanted to keep me going. He said that after a year like we had in 2009 (seven WoO LMS wins, including a record-tying four in a row), I shouldn’t be struggling and running at the back of the pack.”

Indeed, Sinon desires to see Fuller regain the form that led him to a career-best finish of fourth in the ’09 WoO LMS points standings. Fuller slipped to eighth in the 2010 points race with just two wins and ranks 11th in the current standings without a single top-10 finish to his credit through five A-Mains (four in Wight’s car, one in Clint Smith’s second machine).

“I just wanted to help Tim get back on the track as quick as possible,” said Sinon, who serves as president of BPG Inc., a family-owned and -operated specialty distributor with over 30 years of expertise in mechanical and electro-mechanical component sourcing and application design. “He made a commitment to run with the World of Outlaws and wants to keep it, and I’m happy to help him do that. I’ve always liked and respected Tim and I just decided that getting involved with him was something different that I wanted to try.

“I’m really looking forward to this. It’s a break from the open-wheel deal, a cool opportunity. I’ve never seen a World of Outlaws Late Model show in person, but I know how popular the series is and I’m excited to try and get out and see a few of Tim’s races this year. It’s going to be fun – just two old Modified guys getting together to try to run with the World of Outlaws.

“Tim is too talented to be running the way he has,” added Sinon, who has also given Fuller an open invitation to drive one of his team’s Modifieds in special events that fit Fuller’s schedule. “He’s shown he can run up front and win World of Outlaws races and he just needs to be in the right situation to do it again.

“My hope is to try and get him back to where he was a couple years ago. Coming off the situation he’s been in and considering that the season has already started, this is going to be a building year for him. But he has the talent and hopefully in the future this could get bigger.”

Of course, Fuller heads into this weekend’s WoO LMS action with a bare-bones program: a single black front-end Rocket car along with assorted spare parts, tires and wheels that he purchased from Wight (“John did me right on the deal to get me going,” he said), and one engine that he’s “borrowed/slash/leased-out” from noted upstate New York DIRTcar Modified motor builder Kevin Enders. He also has his hauler (Fuller was always responsible for transporting Wight’s cars), but he knows he needs reinforcements to sustain a full campaign on the road with the Outlaws.

“Look, Chad has helped a lot and has gotten me racing on my own,” said Fuller, who ran a handful of dirt Late Model events for Wight in 2005 and 2006 before going fulltime with the trucking company magnate in ’07. “My bank account wasn’t gonna do it because I had such a disastrous 2010 season, and through the beginning of 2011 in Florida and Mississippi, I’ve made zero. I’m in the hole big. Now I’m starting to crawl out, but the reality is, it’s still gonna be tough for me to make the whole season with what I’ve got.

“Things have started to fall into place, though. I know I can make it to this weekend’s races, and I’m working on a couple other things to try and make it go. Nothing’s concrete yet, but hopefully by end of the week something will come through and help me build this deal up even more so I can keep going. I’ve gotten a lot of calls lately from people who are willing to help, so it’s looking better.”

Fuller is thankful that he now has a chance to follow the WoO LMS as he had planned. His morale has risen dramatically since landing Sinon as a sponsor.

“I was at rock bottom until he called,” said Fuller, whose car will continue to sport his familiar No. 19. “I just didn’t know what to do. If I couldn’t run with the Outlaws I was gonna have to just pick-and-choose whatever (dirt Late Model) races were closest to my place – races that are six, seven, eight hours away.”

Those great distances Fuller must travel to enter most dirt Late Model events is what makes the WoO LMS so attractive to him. As a contracted series driver he receives incentives (show-up money, pit passes, first shot at provisional starting spots) that provide him a healthy dose of security – not to mention an opportunity to share in the tour’s nearly $400,000 points fund ($100,000 to the champion down to $21,000 for 10th place).

“A guy like me, you need that guaranteed (WoO LMS) money so you’ll be able to pay your fuel bill and go to the next race,” said Fuller, who can virtually count on earning a minimum of $1,200 (show-up money and last-place A-Main payoff) at every series event. “If I go run non-Outlaw shows, have some trouble and don’t qualify, I get nothing, so for me, the benefits of running a series are what keep me racing.”

Fuller yearns for a return to his ’09 success level, when he earned nearly $175,000 on the WoO LMS. He has no illusions about what it will take to recapture that magic, however.

“I don’t have big expectations,” said Fuller, who doesn’t currently have a fulltime mechanic but has “recruited” 2009 WoO LMS Crew Chief of the Year Mike ‘Smoke’ Countryman, whose run on Fuller’s payroll ended last month, for this weekend’s Midwestern events. “I just want to run competitively. We’re just gonna try to build up everything as the year goes on.

“We really had something in 2009 – we had the right motors and we really hit on something with the car that worked well. But everything changed over that winter. We took on different motors with John (Wight) and we just weren’t right last year, and we started out horrible this year. You just can’t miss on anything with this deal or you’re an also-ran.

“It’s very frustrating coming from 2009 to where I’m sitting now, but I think it’s going to get better,” he concluded. “We just have to get a few races under our belts and see where we go.”

Information on this weekend’s WoO LMS events is available by logging on to www.hartfordmotorspeedway.net and www.bluegrass-speedway.com.