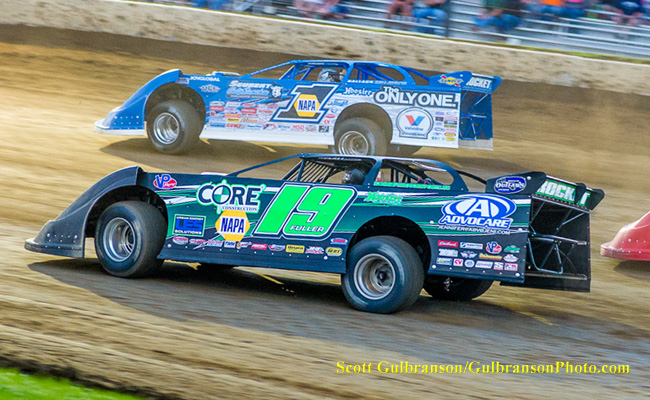 After missing much of the first half of national tour’s 2014 campaign, Fuller, 46, of Watertown, N.Y., has returned to the series and is hitting his stride just as he prepares to visit the site of his first-ever series victory. In winding down the four-race WoO LMS Wild West Tour, Fuller heads for Brown County Speedway in Aberdeen, S.D., on Tuesday (July 15) and River Cities Speedway in Grand Forks, N.D., on Friday (July 18).

“I don’t know if I’ve been this excited to race in years,” said Fuller, who competed full time with the WoO LMS from 2008 through 2013 before his ride with Kennedy Motorsports briefly took him in a different direction to start the 2014 season. “I’m happy to be back running with these guys and my car’s good. When you’re happy and you have a good car you want to race and you look forward to going racing.”

The return to River Cities could be just what Fuller needs to spark a rejuvenation in a career that has sputtered in recent seasons. The 3/10-mile oval gave Fuller his breakthrough WoO LMS victory during his first full Late Model season in 2007, providing a catalyst to get his Late Model career rolling as he transitioned from big-block modifieds.

“You always remember your first win,” said Fuller, who claimed multiple big-block modified championships in the Northeast before beginning the switch to Late Models in 2005. “They’re all tough to get, but I definitely remember that first one plain as day. It was good; it was a special moment and really let me know I could do this Late Model racing deal.”

Fuller went on to claim the WoO LMS Rookie of the Year title in 2007 and added two more A-Main victories in 2008 before exploding with seven series triumphs in 2009 on his way to a career-best fourth-place finish in the WoO LMS championship chase.

But 2009 has so far proved to be Fuller’s high-water mark on the WoO LMS. He added two more victories in 2010, but his performance declined beginning with a 2011 season that was marked by uncertainty surrounding his future in Late Model racing. Fuller, who parted ways with Gypsum Racing team owner John Wight early in 2011 and fielded his own underfunded team until landing a ride with Kennedy Motorsports late in 2012, has struggled to return to his previous performance level, going winless in WoO LMS action in 2011 and 2012 and winning just once in 2013.

But Fuller has shown plenty of promise in his recent return to the WoO LMS. Rejoining the national tour at June’s Firecracker 100 presented by GottaRace.com at Lernerville Speedway in Sarver, Pa., Fuller recorded three top-10 finishes during the extended race weekend, finishing sixth in both Firecracker 100 preliminary events before posting an eighth-place result in the $30,000-to-win finale.

Fuller had another strong run going in the Wild West Tour opener at Hibbing (Minn.) Raceway on Thursday (July 10), advancing from 16th to seventh before getting turned around midway through the race.

Fuller hopes Friday’s trip to River Cities will continue his resurgence and set the stage for as successful second half of the season as he looks to build momentum for a full-time WoO LMS campaign in 2015.

“We haven’t won as many as what we want here lately, but we’re getting closer,” said Fuller. “Sometimes it takes something like that maybe to get wheels in motion. You go to a place like that where it all started and you never know, it could happen again.

“We’re really looking at getting ourselves in position where we jump a couple spots in points before the end of the season. That helps for 2015 to be up in points and being guaranteed provisionals to start the year. I’m excited to be back, so we want to do the best we can with it.”

In returning to WoO LMS action, Fuller has also worked through a chassis switch. After driving a Capital Race Car in 2013, Fuller has switched back to the Rocket Chassis cars he spent much of his Late Model career driving. It took some time for Fuller to readjust to a Rocket car, but after following the advice of Rocket Chassis’ Mark Richards and Matt Barnes, Fuller has things rolling in the right direction.

“It’s been a crazy year with us switching cars and everything,” said Fuller. “I tried to do some things that weren’t working relating back to the Capital car. But this thing here is a totally different creature. Now, I’ve just stuck with things that Mark (Richards) and Matt Barnes (both of Rocket Chassis) were talking about.

“We’ve stuck to the gameplan and we’ve really been pretty good everywhere. It was tough at first, but we’ve been getting better and better. We’ve been good right out of the box every racetrack we’ve raced at lately, so I’m looking forward to every racetrack we go to.”

While his past performance at River Cities has Fuller optimistic he can run well on Friday, he has just one previous result to draw on for Tuesday’s race at Brown County. The third-mile oval welcomes the WoO LMS for the first time since hosting a Wild West Tour race in 2008, an event in which Fuller was hampered by mechanical woes.

Even with his limited experience at Brown County, Fuller is looking forward to the Tuesday’s event, just as he looks forward to every race enters right now.

“I look forward to going (to Brown County). I don’t remember much about it, but each and every race right now is a pleasure,” Fuller said. “We’ve been running good and now we just need to get through and win. You hang around the top five long enough and you’re gonna eventually win some races. You get a win and usually things just seem to keep going good. Maybe that’s all we need. We’ve done it before, so maybe we can do it again.”

Tuesday’s action at Brown County Speedway in Aberdeen, S.D., gets underway at 7:30 p.m., while Friday’s action on River Cities Speedway in Grand Forks, N.D., gets started with hot laps at 6:30 and qualifying at 7. For more information on Brown County Speedway, visit www.bcspeedway.com. For more information on River Cities Speedway, visit www.rivercitiesspeedway.com.

For more information on the World of Outlaws Late Model Series, visit www.worldofoutlaws.com. Fans can also follow the WoO LMS on Twitter at Twitter.com/WoOLateModels and Facebook at Facebook.com/WorldofOutlaws.