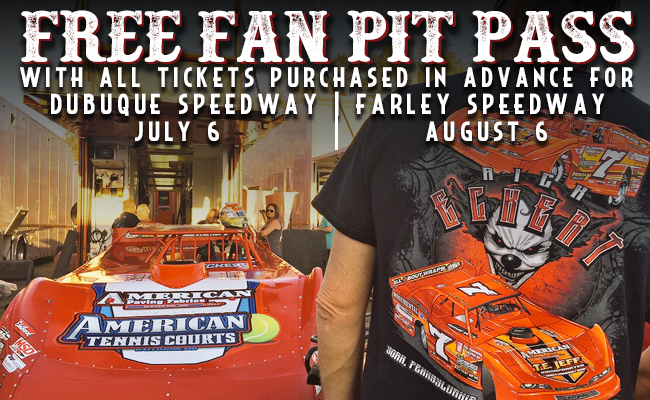 With special access to the pit area, fans will be able to meet their favorite drivers, watch crew members turn wrenches on the 800 horsepower machines, attend and listen to the drivers meeting, see lineups and results at the World of Outlaws command center and more.

Returning for the first time since 2005, the World of Outlaws are excited to hit the action-packed 3/8-mile Iowa speed plants.

Over the years the Series has collected many new drivers who will be making their first World of Outlaws appearances at Dubuque and Farley including 2017 Series Champion Brandon Sheppard, Mike Marlar, Chris Madden, 2017 Rookie of the Year Devin Moran, Tyler Erb, Chase Junghans, Morgan Bagley and three rookie of the year contenders Chris Ferguson, Brent Larson, and David Breazeale.

Only two drivers remain on tour full-time who entered the events back in 2005 including 2011 Champion Rick Eckert and 2015 Champion Shane Clanton. Both of whom are still looking to collect their first Series wins of the 2018 season.

The best drivers in the nation will face several tough local and regional standouts including Iowa natives Chris and Chad Simpson, all in search of the $10,000 top prize. Both events will feature full programs including hot laps, qualifying, heat races, Last Chance Showdowns and a 50-lap Sears Craftsman Feature.

Purchase your tickets for the World of Outlaws Craftsman Late Model Series events at Dubuque Speedway and Farley Speedway today!