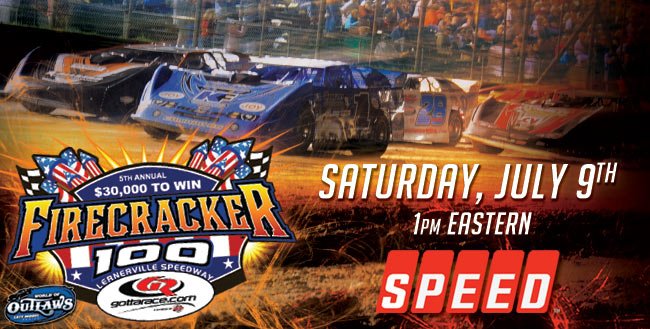 Controversy on the Air: Firecracker 100 Broadcast on SPEED
at 1 p.m. Eastern on Saturday, July 9

CONCORD, N.C. – July 8, 2011 – All the excitement, pageantry and post-race controversy of the fifth annual Firecracker 100 presented by GottaRace.com at Lernerville Speedway will be broadcast to the nation Saturday (July 9) at 1 p.m. ET/Noon CT in a super-sized two-hour show on SPEED.

Highlights of the two hard-core preliminary programs that kicked off the World of Outlaws Late Model Series weekend at the four-tenths-mile oval near Pittsburgh will lead into comprehensive coverage of the headlining Firecracker 100, a crown-jewel event featuring the nation’s top dirt Late Model drivers in a battle for a $30,000 top prize.

Viewers definitely won’t want to miss the controversy that boiled over following the race when superstar Scott Bloomquist protested the legality of the tires used by rival Jimmy Mars. Both drivers go on-the-record about the situation in explosive post-race interviews that will no doubt stir emotions and make this Firecracker on SPEED one of the season’s most-talked about events.

Ralph Sheheen leads the broadcast team with Shane Andrews and Ozzie Altman providing fans all the color and breaking news from the huge event. Special features on drivers and the entertainment-filled Firecracker 100 weekend dot the fast-paced program.

From the down-to-the-wire preliminary competition to the struggle to qualify for the Firecracker 100 and the race for the checkered flag in the 100-lap World of Outlaws spectacular – it’s all on SPEED at 1 p.m. Eastern Saturday.