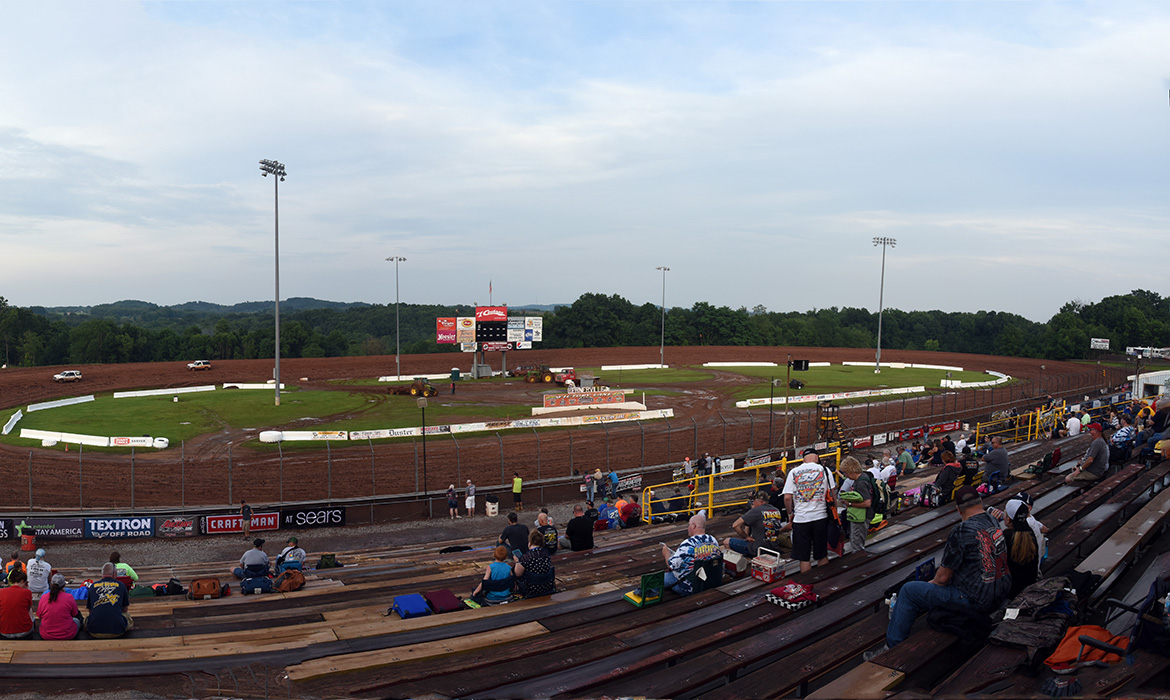 Paul Arch Photo
For Many Fans, Lernerville Speedway’s Firecracker Weekend is as Much About Off-Track Fun as the Intense On-Track Action
By Jordan DeLucia | June 20, 2019 at 10:30 am

Lernerville Speedway’s annual Firecracker 100 has a reputation for producing the best Dirt Late Model racing in Pennsylvania over the past 13 years. Equally as important, the weekend also has a reputation for the best camping, partying, fan-driver interaction, communal generosity and overall entertainment experience money can buy.

Time and time again, the always-packed camping lot proves itself to be the best way to stay local and enjoy a weekend at the races. Friends and family anticipate this weekend every year and typically save their most creative camping activities for when “The Most Powerful Late Models on the Planet” come into town, culminating each evening with bonfires, weenie/marshmallow roasts and a cooler full of cold ones. There truly isn’t a better way to meet your new racetrack friends than to spend a weekend camping at the Firecracker.

Loads of fan-to-fan camaraderie is seen across the country, but it’s the driver-to-fan interaction opportunities at the Firecracker that make the real memories for years to come.

Kicking off Friday’s trackside events are the cornhole and horseshoe tournaments at 1 p.m. near the fan stage, where everyone is invited to come and take part in a classic racetrack-campsite pastime before the “best tailgate/campsite” judging begins. And who knows, you may see a few Outlaws out and about, taking part in the fun and games themselves…

To sweeten the pot, Friday and Saturday night’s racing programs will include fireworks displays, while Friday night boasts live music acts at the conclusion of the night’s action.

For the big day on Saturday, lots of fan-friendly activities are on tap, beginning with the “Kick It to Cancer” kickball game and door panel auction/memorabilia raffle, benefiting the LUNGevity Foundation.

Last year, the fans helped raise $5,153 for LUNGevity, an organization that focuses on lung cancer research and patient advocacy, making it the most successful year to date. The auction/raffle will begin Friday evening under the grandstands and will conclude Saturday at the kickball game, held at noon at the football field adjacent to the Lernerville Speedway facility.

The kickball game is the perfect chance for fans to interact with drivers, as some get the chance to participate in the game. At the conclusion of the game, the raffle items will be drawn, and fans will have a final opportunity to place bids on the door panels.

The items for this year’s auction/raffle are set to out-do last year, as door panels from Brandon Sheppard, Chase Junghans, Darrell Lanigan, Blake Spencer, Dennis Erb Jr. and Ricky Weiss are already set to be on the auction block.

New to the Firecracker weekend this year is the addition of the RUSH Dirt Late Model Series “Bill Emig Memorial 50” event, running alongside the Outlaws throughout the weekend.

RUSH’s show will get underway on Friday night with Hot Laps and FK Rod Ends $100 “Shock the Clock” Qualifying, then into the $25 to-win FK Rod Ends heat races and the $100 to-win “John Buzzard Memorial” Dash, which will set the beginning rows of the feature lineup. Buzzard was a former racer for Bill Emig, who tragically lost his life at Expo Speedway. Saturday night will begin with Last Chance Showdown events, followed by the 50-lap, $450-to-start, $10,000-to-win finale and the $400 to-win, $200 to-start “Wheelman” non-qualifier race concluding the weekend’s events.

Don’t miss a moment of the exciting weekend activities planned for the 13th annual Firecracker 100 at Lernerville Speedway, beginning this Friday, June 21!