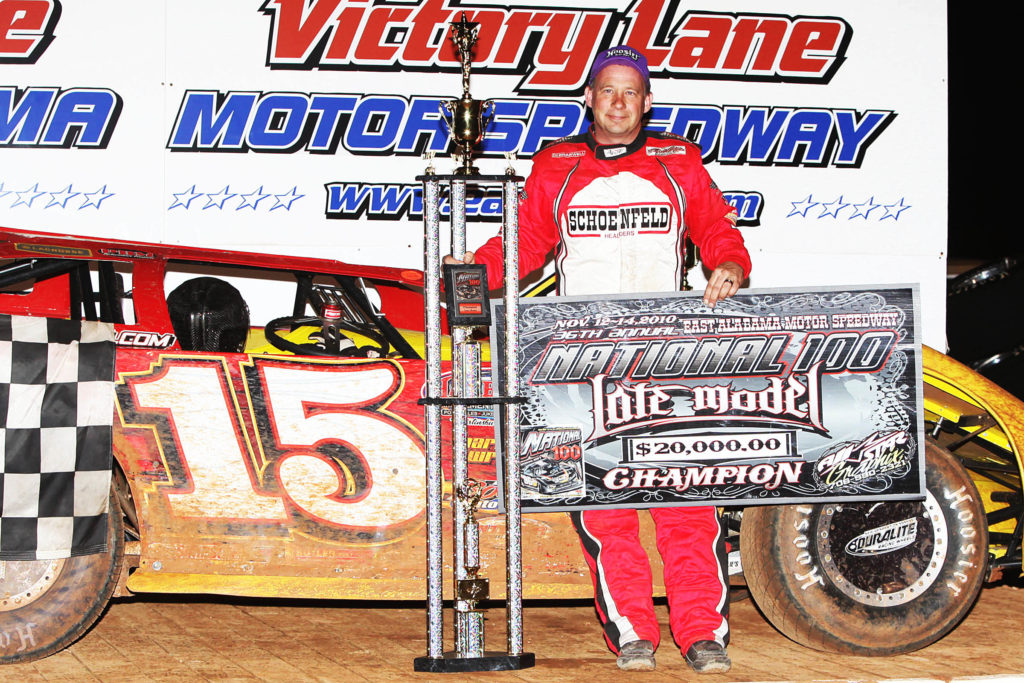 After driving his one-month-old Barry Wright-built car to a victory worth nearly $25,000 in Sunday night’s unsanctioned 36th annual National 100 at East Alabama Motor Speedway in Phenix City, Ala., the World of Outlaws Late Model Series star suddenly has some true pep back in his step.

“Really, this has been one of the worst years I’ve had in quite awhile,” said Francis, who managed just two A-Main wins and a fourth-place finish in the WoO LMS points standings during a 2010 season that saw him field his own equipment for the first time since capturing the national tour’s title in 2007. “It’s a good feeling to get a big win that shows we’re headed in the right direction.”

Good enough, of course, to make Francis, 43, of Ashland, Ky., want to keep on racing, but he’s resisting the temptation to enter more events before snow starts flying. He’s walking off the 2010 stage with momentum he hopes to carry into next season’s dirt-track battles across the country.

“We’re gonna stop right now after we’ve had some success and kind of regroup,” said Francis, speaking on Monday afternoon from Jackson (Miss.) Motor Speedway where he headed after Sunday’s action with fellow WoO LMS regular Clint Smith (the 13th-place finisher in the National 100) to provide instruction for aspiring racers at track owner Don Cliburn’s driving school. “We need to get started on building some new cars and get our program settled for next year. We’re way ahead of where we were at this time last year – we didn’t even have cars yet or even a hauler – but there’s still a lot of work to do.

“It’s been a tough year, but this win definitely takes a lot of pressure off for the whole winter. Naturally it starts all over again in a few months, but at least we’re progressing the way we want and we finished the year on a high note. We’re a winner for the whole winter.”

Francis paused, and then added with a smile, “We got enough money to eat all winter now. Between this and the Outlaw (awards) banquet last weekend (he picked up a $35,000 points-fund check during the festivities), we were able to put a little money in the bank account.”

The National 100 triumph – Francis’s first-ever in sporadic appearances in the long-running event – came in his seventh start behind the wheel of the red-and-yellow Barry Wright car he debuted the first weekend of October. He hasn’t had a finish outside the top 10 with the mount.

“We’re starting to learn this Barry Wright car,” said Francis, who decided to try a chassis from Wright’s Cowpens, S.C.-based shop after exclusively running Rocket Chassis cars for more than a decade. “We’re getting a little more familiar with what the changes we make are doing to it, what it likes compared to what we’re doing to it. Barry and Lance Wright have been great to work with and have really opened up all their books to help us get going in the right direction.

“We had a lot of success with Rocket over the years, but we needed to do something different to kind of recharge everybody’s batteries,” he added. “After the last two weeks with this car (he also registered a third-place finish on Nov. 6 in the first half of the Lowes Foods World of Outlaws World Finals Presented by Bimbo Bakeries and Tom’s Snacks at The Dirt Track at Charlotte) I feel like I’m getting comfortable and consistent. I probably have quite a bit more confidence now (for 2011).”

Francis was “really happy with the car all weekend” at East Alabama. Racing with a couple different faces on his pit crew – with his regular mechanic Derik Reese enjoying a weekend off to spend time at home, Francis’s crew chief Tim Logan was assisted by Chris Farmer, whose wife April drives a dirt Late Model, and Shane Clanton crewman Brant Hardin – Francis won a heat race on Saturday night to earn the third starting spot in the National 100. He controlled virtually the entire distance of Sunday evening’s 100-lapper, grabbing the lead from Mike Marlar of Winfield, Tenn., on lap five and then holding off Marlar and Chris Madden of Gray Court, S.C., and waiting out a slight mid-race delay for rain to reach the checkered flag first.

“It was a real good test for the (Wright) car,” Francis said of the grueling extra-distance event. “They race on it all day long so the racetrack rubbers up so hard. Then they go out there and water it before our race and when they drop the green flag you’re running wide open for the first 10 laps. After that it kind of progressively slows and slows and slows, and maybe the last five or 10 laps it starts picking up a little rubber stripe again. It kind of goes through every condition you can imagine being in over the course of 100 laps.”

With a satisfied grin on his face, Francis now turns his attention to 2011. The co-leader with Josh Richards on the WoO LMS win list since 2004 (with 28 victories) and one of only two drivers (Rick Eckert is the other) to start all 281 series A-Mains contested over the past seven seasons, the ‘Kentucky Colonel’ is eyeing a return to championship contention.

“Our intent right now is to go run with the Outlaws again,” said Francis, who has never finished worse than sixth in the WoO LMS points standings.