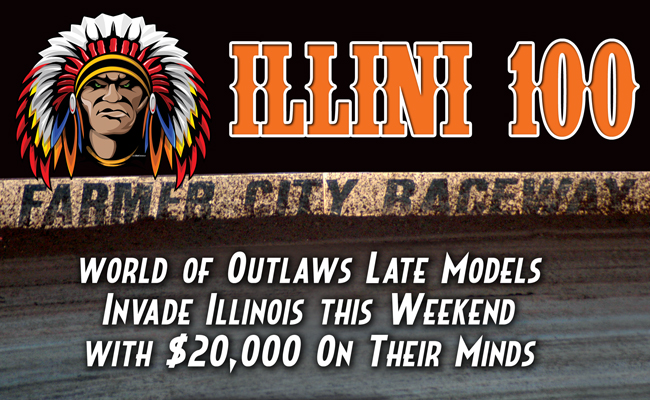 Darrell Lanigan, of Union, Ky., leads the Outlaws into familiar territory with a 36-point margin over Brandon Sheppard, of New Berlin, Ill. Rick Eckert of York, Pa, who recently took over the Rocket Chassis house car ride for Sheppard, is third in the championship with 2009 Illini 100 winner Shane Clanton, of Zebulon, Ga., sitting in fourth. The 2006 champion, Tim McCreadie, of Watertown, N.Y., is fifth in points and aiming to break into the win column this weekend.

Other series regulars who will be looking to tame the high banks Farmer City include Morgan Bagley of Tyler, Tex., Eric Wells of Hazard, Ky., Frank Heckenast Jr. of Orland Park, Ill., Chub Frank of Bear Lake, Pa., Clint Smith of Senoia, Ga., Chase Junghans of Manhattan, Ks., Jack Sullivan of Greenbriar, Ark., and Rick ‘Boom” Briggs of Bear Lake, Pa. Regional standout and teenage sensation Bobby Pierce of Oakwood, Ill, is off to a hot start to the season, picking up wins recently at Eldora Speedway and 34 Raceway.

Through seven events on the tour this season, there have been seven different winners. Among those drivers have been three new series winners including Casey Roberts and Kyle Bronson, who both claimed victories at Volusia Speedway Park, and Mike Marlar of Winfield, Tenn., who claimed his first World of Outlaws Late Model Series victory April 12 at Tazewell (Tenn.) Speedway.

On Friday, April 25, the WoO LMS gang will open the weekend with practice, Ohlins Shocks Time Trials and Heat Races. On Saturday night, April 26, the event concludes with the Last Chance Showdowns and the 100-lap $20,000-to-win event. An open practice session will be held on Thursday night, April 24.

Further information on Farmer City Raceway can be obtained by calling (309) 928-9110 or log on to www.farmercityracing.net.

Thursday’s pit admission can be included in an $85 three-day band ($5 discount for DIRTcar UMP members).

Advance-sale reserved seat ticket packages $40 for adults and $20 for children 12-and-under. On-line and phone ticket will conclude at 5 p.m. ET on Wed., April 23.

Two-day general admission tickets: $45 for adults and $20 for children 12-and-under.