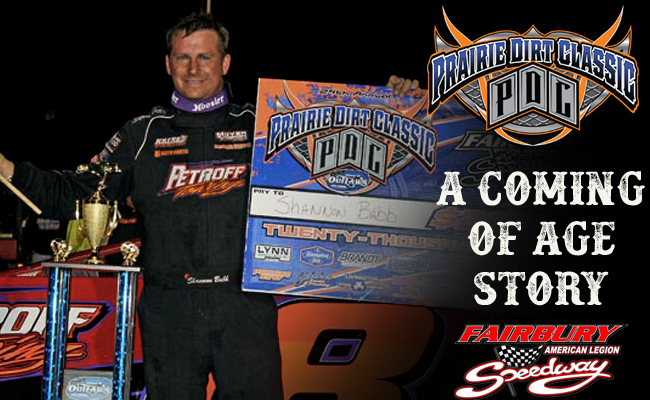 History in the Making: The Growth and Success of the Prairie Dirt Classic

FAIRBURY, IL – July 16, 2018 – On July 27-28, the town of Fairbury will double in size as dirt Late Model lovers from around the globe flock to Fairbury American Legion. The energy at the historic quarter-mile clay oval is electric for the annual Prairie Dirt Classic, and the unique format keeps the crowd on the edge of their seats. But for World of Outlaws Craftsman Late Model Series Director Matt Curl, the event also holds a far more personal significance; it is a homecoming and a celebration of the journey that brought him to his current career in the industry.

“In 2012, when I initially presented the idea of moving the date of the Prairie Dirt Classic and making it a sanctioned 100-lap event with the World of Outlaws, the Fair Board was a little skeptical of how it would turn out. I presented pages and pages of statistics as to why it would work, and they trusted me; we went for it,” said Curl, former promoter at Fairbury American Legion Speedway. “The team we assembled was bound and determined to make this event one of the best in the country, not only to display the extraordinary facility to national drivers and fans but also in order to boost the local economy in the town of Fairbury.”

In 2013, when the World of Outlaws first sanctioned the Prairie Dirt Classic, the shift in the magnitude of the event was an obvious one. In 2012, the 22-car field was comprised completely of the bad boys of Illinois. Just one year later, the starting field was packed with the best dirt Late Model drivers in the country.

Shannon Babb from Moweaqua, IL, thrilled his home-state crowd, outdueling Dale McDowell of Chickamauga, GA, and Bobby Pierce of Oakwood, IL, down the stretch to win the 2013 edition of the Prairie Dirt Classic. This shootout was arguably the most dramatic of the 2013 World of Outlaws Late Model campaign and one of the most memorable Prairie Dirt Classic shootouts to date.

Babb, Pierce and McDowell ran three-wide at times during the last five laps, igniting the packed house that turned out for the biggest event in Fairbury’s storied history. The trio came off turn two close together on the final lap, but Pierce and McDowell vied for the same real estate in turn three and lost momentum, allowing Babb to vault away to the checkered flag in his Victory Circle car.

It wasn’t just the high-quality drivers that rapidly excelled the magnitude of the Prairie Dirt Classic; Curl and his track crew at Fairbury presented the perfect track surface, which produced exactly what they were gunning for: one badass race.

“I knew our team could promote this event through and through, but the number one thing that would keep fans coming back to this event was an extremely racy track,” continued Curl. “Surprisingly enough, at that point we had never held a 100-lap event at Fairbury, so as you can imagine there was a lot of doubt. We were going to do whatever it took to make the race itself as memorable as possible.”

The race was so memorable that DirtonDirt.com deemed it the single best race of 2013.

The success continued into the following two years, as the Prairie Dirt Classic received DirtonDirt’s Race of the Year honors.

“What helps me to truly wrap my head around how much this event has grown over the last five years, is seeing drivers like Jimmy Owens — who has only made one appearance at the Prairie Dirt Classic —list it on his website as his favorite race of the year,” said Curl. “Few things put a bigger smile on my face than knowing that Fairbury has set a standard that tracks around the country are trying to reach. With my position as the Series Director of the World of Outlaws, I strive to assist track promoters in attaining that same goal I set for the Prairie Dirt Classic back in 2013.”

For more information on the Prairie Dirt Classic presented by Bank of Pontiac visit fairburyspeedway.com. Tickets are still available online, and the event will air live on DIRTVision and DirtonDirt.