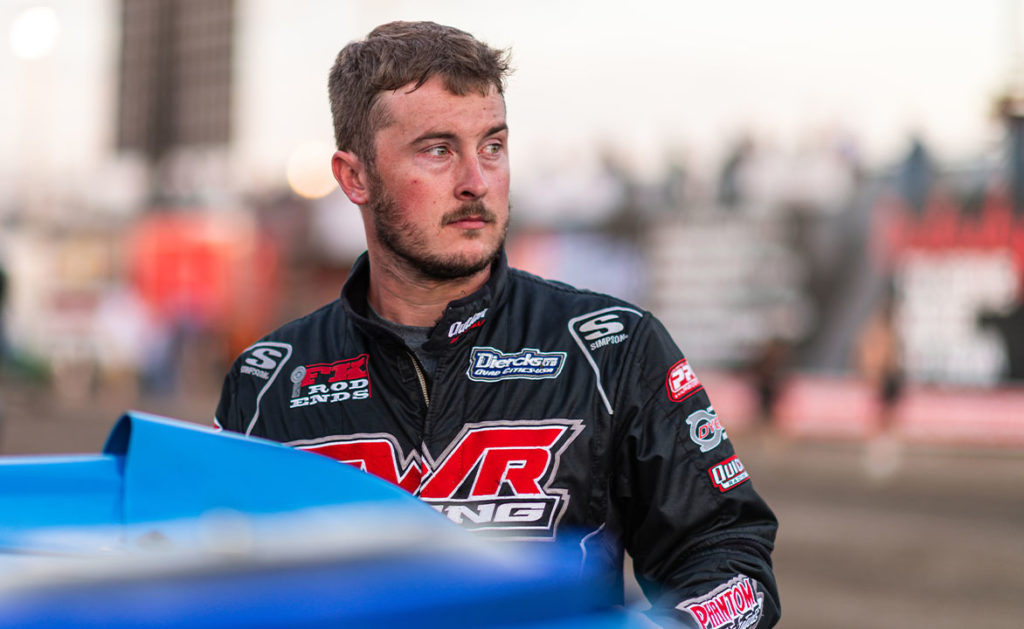 The Benton, KY driver is eight points behind Max Blair in Rookie of the Year battle

It’s not often a rookie contender has a leg up on his competition.

However, Tanner English has accomplished a feat that no other World of Outlaws CASE Construction Equipment Late Model Series driver has in 2022—win at Fairbury Speedway.

As The Most Powerful Late Models on the Planet travel to Fairbury, IL for the Prairie Dirt Classic, July-29-30, the Benton, KY driver has his eye on Saturday’s $50,000 prize, now that he knows what it takes to get to Victory Lane.

“Not only just having a win, I have a lot of laps around [Fairbury],” English said. “I really like that place, and it’s close to home, and it sits on dirt that I’m familiar with, and I really know what it takes to get around that black dirt, and it just helps me be prepared and everything.”

Many drivers circle the Prairie Dirt Classic as one they want to add their name to the history books.

English stated he knows how massive a victory it would be for his career if he won the $50,000 prize.

“Just having my name on that list, with a bunch of my idols and people that I grew up racing with and stuff, it’d be a big deal,” English said. “Just doing it in front of that crowd, they’re a really special crowd, and they know what’s up. They follow dirt Late Model racing, and they know when you’ve really done something, and I feel like if you win there, you’ve accomplished something really big.”

As English eyes another win at Fairbury, he’s also looking toward accomplishing a season-long goal—becoming World of Outlaws CASE Late Models Rookie of the Year.

He’s only eight points behind Max Blair entering the Prairie Dirt Classic, thanks to his consistency in the last two months of competition. In his previous 13 World of Outlaws CASE Late Model starts, he’s finished in the top 10 on 11 occasions.

He stated one of the reasons for his consistency is his familiarity with tires and how he’s turned his Qualifying program around.

“I’m really familiar with [LM Tires] and know what they’re going to do,” English said. “I felt like we’ve learned a lot this year, so maybe we’ll be alright when we go back out to [Blair’s] territory in a couple of weeks or so.

“That and I also feel like we’ve gotten better. We’ve gotten our Qualifying program better, and that helps out a lot. At least now I ain’t got to pass 20 cars. We’ve been trying to stay consistent and just finish races.”

While English’s consistency is something he’s proud of, his Riggs Motorsports team is looking at another goal—his first World of Outlaws CASE Late Models triumph.

It’s something he feels isn’t far away.

“Really, I felt like it was coming at River Cities (Speedway), and I felt like we just made a wrong tire choice and made a few bad adjustments on the car,” English said. “I had the car to win there. I just felt like I second-guessed myself and put ourselves behind the eight-ball.

“The last few races, we’ve started on the front row, so that’s a big confidence booster, and hopefully, we keep that up and just keep finishing up front.”

English and the World of Outlaws CASE Late Models visit Fairbury Speedway in Fairbury, IL for the 32nd Running of the Prairie Dirt Classic, July 29-30.