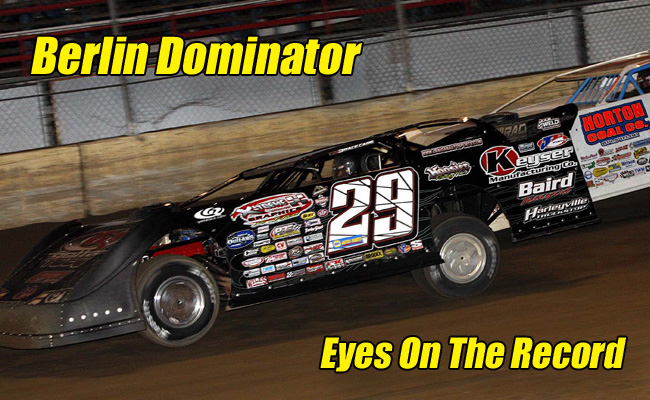 MARNE, Mich. – Sept 10 – Darrell Lanigan can make history this weekend at Berlin Raceway with the 7/16-mile oval once again covering its pavement surface with clay for the third annual Keyser Manufacturing Down & Dirty Weekend Presented by NAPA.

If Lanigan’s past performance at Berlin is any indication of how he will fare this weekend, there’s a good chance that he will indeed break the record with a victory in one or even both of the two programs Berlin has set for Friday and Saturday. The 44-year-old Union, Ky., driver is perfect in two previous trips to Berlin, claiming both the 2012 and 2013 Down & Dirty A-Mains.

“That would be pretty cool,” Lanigan said of the idea of breaking the record he set in 2012 en route to his second WoO LMS championship. “Anytime you can break a record, especially beating your own record, it’s pretty neat. To get 15 wins on the season is definitely pretty awesome, but I’d always like to get more.”

Whatever the format, Lanigan enjoys visiting Berlin Raceway. As shown in his previous results, the sprawling track fits his driving style and suits his Club 29 Race Car very well.

“The place races good. You can usually race all over it and it’s a pretty neat place to go to,” Lanigan said “Our program fits well with the big tracks like that. We definitely should run well up there this weekend.”

One thing that could also work in Lanigan’s favor is his substantial advantage in the WoO LMS standings. At 284 points ahead, Lanigan needs only to start each of the four remaining A-Mains to clinch his third series title.

Knowing the championship is essentially locked up, Lanigan doesn’t have to race conservatively in order to protect his points lead and can instead go out and drive as hard as he needs to try to win each race, which is exactly what he plans to do in the tour’s final four races.

“All we have to worry about is going out to win every race,” said Lanigan, who also owns the record for most career WoO LMS wins at 68 victories. “I think that shows. We’ve won 15 races so far and hopefully we’ll win four more. We just go out every week trying to win races.”

Lanigan will have to overcome some extra competition to remain perfect at Berlin, including the winner of the prestigious World 100 this past weekend at Eldora Speedway in Rossburg, Ohio.

Fresh off his last-to-first run at Eldora, Scott Bloomquist of Mooresburg, Tenn., will make his first appearance at the Down & Dirty Weekend. The 50-year-old National Dirt Late Model Hall of Famer and former WoO LMS champion is looking for his first series victory since winning at Volusia Speedway Park during 2013’s Florida Speedweeks action.

Other notable non-series regulars who have indicated intentions to compete at Berlin include Jimmy Mars of Menomonie, Wis., Kent Robinson of Bloomington, Ind., and Steve Casebolt of Richmond, Ind.

Mars, 42, has been one of the most successful non-series regulars in WoO LMS action this season with two victories in 12 appearances. He claimed the open round of the Wild West Tour July 10 at Hibbing (Minn.) Raceway and won the USA Nationals preliminary night feature at Cedar Lake Speedway in New Richmond, Wis., on July 31.

The 27-year-old Robinson competed full time on the WoO LMS tour in 2012 but has scaled back his traveling in recent seasons. He has made four WoO LMS appearances this year with a best finish of eighth coming during June’s Firecracker 100 weekend at Lernerville Speedway in Sarver, Pa.

Casebolt, 36, has just two previous WoO LMS appearances this season with finishes of 20th and 13th at 201 Speedway in Sitka, Ky., and Duck River Raceway Park in Wheel, Tenn.

The most recent WoO LMS trip to the Wolverine State produced one of the biggest upset victories ever on the series with Curtis Roberts of Coleman, Mich., claiming a popular home-state victory Aug. 22 at I-96 Speedway in Lake Odessa.

However, if another home-state driver is to break through at Berlin, he’ll have to overcome the strong hold WoO LMS regulars have had on the top spots in Berlin’s previous two series events. The tour’s travelers filled the top five in last year’s Down & Dirty 100 and claimed four top-five spots in 2012.

Roberts, who will make his first Down & Dirty appearance this weekend, leads a strong list of home-state drivers looking to buck that trend. He’ll be joined by Jeep Van Wormer of Pinconning, who claimed the most recent of his two career WoO LMS victories at Winston Speedway in Rothbury, Mich., in 2013.

Complete programs of time trials, heat races, B-Mains and an A-Main will be contested on both Friday night and Saturday night. Friday’s 40-lap A-Main pays $8,000 to the winner while Saturday’s 60-lap feature pays $12,000.

Racing action is scheduled to kick off at 6:30 p.m. on both Friday and Saturday. There will be an open practice 4-8 p.m. on Thursday.

Support division action will include racing for street stocks, VORES 4-Cylinders and Michigan Dirt Cup Modifieds. The Grand Raggidy Roller Girls Roller Derby Team will be skating on the concourse.

Tickets are available now for online purchase at https://www.vendini.com/ticket-software.html?w=5e4207bb7d05b282b07dd1e9e7aaa904&t=tix.

More information for the event is available on the track’s website at www.berlinraceway.com.