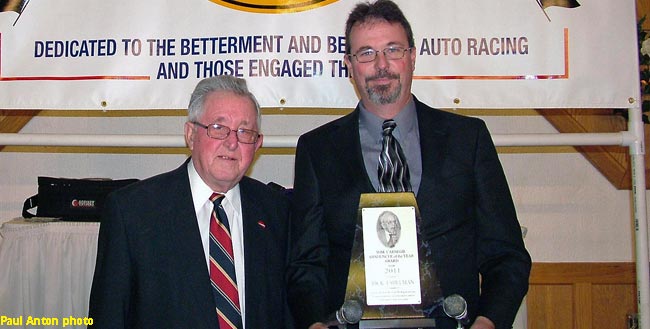 CONCORD, NC – Jan. 25, 2012 – World of Outlaws Late Model Series announcer Rick Eshelman got his start in the motorsports business while living in Michigan. Last Saturday night he returned to his native home to accept a high honor from the Wolverine State’s short-track racing community.

Eshelman, 50, made a 14-hour trip north from his residence in Phenix City, Ala., to attend the 46th annual Michigan Auto Racing Fan Club Awards Banquet in Warren, Mich., where he received the organization’s prestigious Tom Carnegie Announcer of the Year Award. The award is named in memory of the legendary late announcer of the Indianapolis 500.

“Being recognized with an award like this really means a lot to me,” said Eshelman, who grew up in Waltz, Mich., about halfway between Toledo and Detroit. “So many great announcers from not only Michigan but all across the country have received this award and I’m honored to join them.”

Eshelman’s Michigan motorsports roots run deep. His hometrack throughout his childhood was Flat Rock (Mich.) Speedway, a paved oval he attended for the first time at the age of three. He began working there – selling welder’s insurance, scoring races – as a teenager and announced his first race at Flat Rock as a 17-year-old in 1979.

“It was opening night and the regular announcer couldn’t make it,” Eshelman remembered of his debut behind the microphone. “I asked if I could fill in for the night and I got the chance. I loved it and couldn’t wait to do it again.”

After serving as a substitute announcer at Flat Rock for the remainder of the 1979 season, Eshelman became the regular race-caller at Toledo (Ohio) Speedway in 1980. He then headed off for a four-year stint in the Air Force, but his announcing didn’t end while an enlisted man. With Eshelman stationed in Grand Forks, N.D., he spent the 1983-85 seasons calling the races at River Cities Speedway.

Eshelman returned to the announcer’s booth at Flat Rock and Toledo in 1986. He switched to weekly dirt-track announcing in 1999 and 2000 at Ohio’s Limaland Speedway and Oakshade Raceway, and from 2000-2003 he worked at the famed Eldora Speedway in Rossburg, Ohio. He moved south to Columbus, Miss., for a short time early in 2004 – and announced the first event at the town’s Magnolia Motor Speedway – before settling in Phenix City, Ala., and landing his dream job with the WoO LMS in July ’04.

Since taking over as the voice of the World of Outlaws Late Model Series, Eshelman has become one of the most well-known announcers in dirt Late Model racing. His distinctive style and devotion to the sport resulted in recognition from his home state’s stalwart fan club.

“I remember listening to Howard Williams announce at Flat Rock when I was a kid and I just told myself, ‘I’d like to do that,'” said Eshelman, who has called races at 160 tracks in 30 states and three Canadian provinces. “I feel real lucky to be doing what I’m doing now for a living. I owe it all to John Marcum (late founder and president of ARCA) and the start I got at Flat Rock.”

Eshelman will soon be back on the road with the World of Outlaws, traveling the country in the tour’s hauler with his girlfriend, WoO LMS chief scorer Sandy Holt, riding shotgun. The 2012 schedule begins on Feb. 10-11 with the $20,000-to-win ‘Winter Freeze’ at Screven Motor Speedway in Sylvania, Ga., and then continues with the ‘Bubba Army Late Model Winter Nationals’ on Feb. 16-18 at Bubba Raceway Park in Ocala, Fla., and the tour’s portion of the UNOH DIRTcar Nationals Presented by Summitt Racing Equipment on Feb. 23 and 25 at Volusia Speedway Park in Barberville, Fla.

And of course, Eshelman will have four opportunities to announce WoO LMS events in Michigan this season. The circuit is scheduled to visit Hartford Motor Speedway on July 20; Winston Speedway in Rothbury on Aug. 17; Merritt Raceway in Lake City on Aug. 18; and Berlin Raceway in Marne, a paved track that will be covered with clay for a historic $20,000-to-win, 100-lap race weekend on Sept. 21-22.