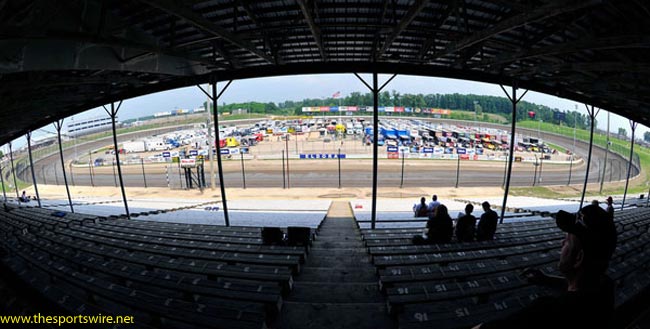 CONCORD, NC – June 9, 2011 – It’s the biggest first-place check available to a dirt Late Model race winner anywhere in the country in 2011 – a gargantuan $100,000 pot of gold that can turn even a moribund season into a memorable one for any driver.

That cold, hard cash will be on the mind of a half-dozen World of Outlaws Late Model Series regulars this weekend (June 10-11) when they travel to Eldora Speedway in Rossburg, Ohio, for the 17th running of the DIRTcar UMP-sanctioned Dirt Late Model Dream event.

Lanigan, who celebrated his 41st birthday on June 3, enters the Dream as one of the country’s hottest dirt Late Model drivers. After missing the WoO LMS season opener on Feb. 17 at Florida’s Volusia Speedway due to a medical issue associated with doctors’ attempts to diagnose the cause of lower-back pain that had been plaguing him, he’s rolled up four wins and seven top-three finishes in nine tour starts and ranks third in the current points standings.

“With the way our program has been going this year, I feel pretty good about our chances anywhere we go,” said Lanigan, whose back problems were ultimately found to be the result of a fractured tailbone. “If we can have some luck go our way I think we have a great shot at being there at the end (of the Dream). It’s been awhile since I won it, so I’d love to do it again.”

Clanton, meanwhile, returns to the ‘Big E’ one year after suffering a heartbreaking defeat in his bid to join Billy Moyer, Scott Bloomquist, Donnie Moran and Jimmy Owens as the only drivers to win Eldora’s World 100 and Dream mega-events. After starting 10th in last year’s Dream, he reached second on lap 61 and began pressuring Moyer for the lead four circuits later, but before he could make another bid his RSD Enterprises car slowed, slumped over on its disabled right-rear corner due to a broken shock bolt. He retired on lap 68 and settled for a 13th-place finish worth $1,800.

“I never start counting the money until the checkered flag falls,” said Clanton, who has started the Dream A-Main five times since 2004 with a top finish of third in ’08. “But when I got up there and caught Moyer (last year), I did think about that 100-grand for a minute. You hate to let a chance to win a crown-jewel race like that slip through your fingers because you never know if you’ll be in that position again, but we’re going to try our hardest to be back up there going for the win again this year.”

Clanton, 35, is hoping his trip to Eldora helps him shake some early-season doldrums on the WoO LMS. While breaking in a new Capital Race Cars chassis he built in collaboration with former Dirt Track World Championship winner Marshall Green, he has yet to register a top-five finish in 10 tour starts and ranks eighth in the points standings.

Two-time defending WoO LMS champion Josh Richards of Shinnston, W.Va., enters the Dream with his name high on everybody’s list of the drivers most overdue to win an Eldora major for the first time. A Dream A-Main starter four times in six attempts since 2005, he’s coming off a career-best finish of sixth in last year’s 100-lapper.

“There’s no place I want to win at more than Eldora,” said Richards, whose career-high finish in the World 100 is a fourth in 2006. “It’s an awesome racetrack and winning the Dream or the World is huge for every driver’s career. I’ve been dreaming of winning a race there ever since I was a kid.

“It’s a real tough place, though, and you need everything to go your way to win. We do everything we can to prepare ourselves for a race Eldora and hopefully this year we’ll have some luck on our side.”

Richards is certainly riding some good vibes into the Dream. Though he’s uncharacteristically winless in 10 starts on this year’s WoO LMS (he’s second in the points standings) behind the wheel of the Rocket Chassis house car he’ll run this weekend, he recently announced that he’ll drive 11 NASCAR Camping World Truck Series events this season in a Toyota owned by NASCAR star Kyle Busch and he won back-to-back Appalachian Mountain Speedweek events on Sunday (at Virginia’s Winchester Speedway) and Monday (Pennsy’s Roaring Knob Motorsports Complex) driving the Ernie Davis-owned No. 25.

WoO LMS veteran Chub Frank of Bear Lake, Pa., will look to carry his recent resurgence over to Eldora, the site of his 2004 World 100 triumph. The 49-year-old has been running strong for the past month, registering four runner-up finishes in five starts (including two in WoO LMS action) before scoring his first win of 2011 in last Friday night’s weekly DIRTcar UMP Late Model feature at Lernerville Speedway in Sarver, Pa.

Frank, who in his winning effort at Lernerville debuted a new sponsorship deal with the Pennsylvania-based Horton Equipment, has qualified for the Dream seven times since 2000. He has three top-five finishes, highlighted by a third-place run in 2007.

Clint Smith of Senoia, Ga., is another WoO LMS stalwart who has regained his form in recent weeks and hopes to use the momentum to his advantage at Eldora. He snapped a frustrating 122-race winless streak on the WoO LMS with a victory on May 8 at Needmore Speedway in Norman Park, Ga., and sits seventh in the points standings, one spot behind Frank.

The lone first-time Dream entrant from the WoO LMS roster will be John Lobb of Frewsburg, N.Y., a 41-year-old Rookie of the Year contender on the tour. He recorded his season-best WoO LMS finish of ninth in last month’s event at Needmore.

Eight other WoO LMS regulars aren’t making the haul to Eldora for the Dream, but they’ll all be busy this weekend – the last before the national tour returns to action on June 18 at Winchester (Va.) Speedway.

Hubbard, 19, has shined brightest on the Mid-Atlantic tour, sharpening his skills and adding to his growing win total. He drove the Beitler Enterprises No. 19 to back-to-back Appalachian Mountain Speedweek victories on Tuesday at Williams Grove Speedway in Mechanicsburg, Pa., and Wednesday at Lincoln Speedway in Abbottstown, Pa., and is in the driver’s seat to capture the series points title.

Tim McCreadie of Watertown, N.Y., who has started the Dream A-Main every year since 2004 except ’09 when he was still recovering from a back injury, has opted to bypass this year’s $100,000-to-win biggie at Eldora. Frustrated with his subpar dirt Late Model performance this season, he plans to compete in a couple upstate New York Big-Block Modified events this weekend while taking some time to regroup his Sweeteners Plus team’s full-fender program for the coming summer stretch of racing.

Tim Fuller of Watertown, N.Y., will also run a pair of Big-Block Modified events in the Empire State this weekend. He’s still building up his BPG Inc.-sponsored dirt Late Model program after leaving the Gypsum Express team in mid-April to strike out on his own.

WoO LMS Rookie of the Year contenders Ron Davies of Warren, Pa., and Pat Doar of New Richmond, Wis., are staying close to home this weekend – Davies has events at Little Valley (N.Y.) Speedway (Friday) and Eriez Speedway in Hammett, Pa. (Sunday) on his schedule, while Doar has his hauler pointed toward a Dart Challenge Series tripleheader in North Dakota – and second-year series traveler Jill George of Cedar Falls, Iowa, plans to get seat time in weekly events in Darlington, Wis. (Friday), Webster City, Iowa (Saturday) and Dubuque, Iowa (Sunday).

The WoO LMS ends a month-long break on June 18 with the running of the rescheduled Gunter’s Honey Spring 50 at Winchester Speedway. The tour then moves to Lernerville Speedway for the fifth annual Firecracker 100 presented by GottaRace.com, a three-day spectacular that includes preliminary programs topped by 30-lap, $6,000-to-win A-Mains on Thurs., June 23, and Fri., June 24, and the $30,000-to-win finale on Sat., June 25.