Skip to content
Drydene to Sponsor Weiss on 2020 World of Outlaws Tour
Tags: Battle at the BorderDrydenePinnedRicky WeissVado Speedway Park 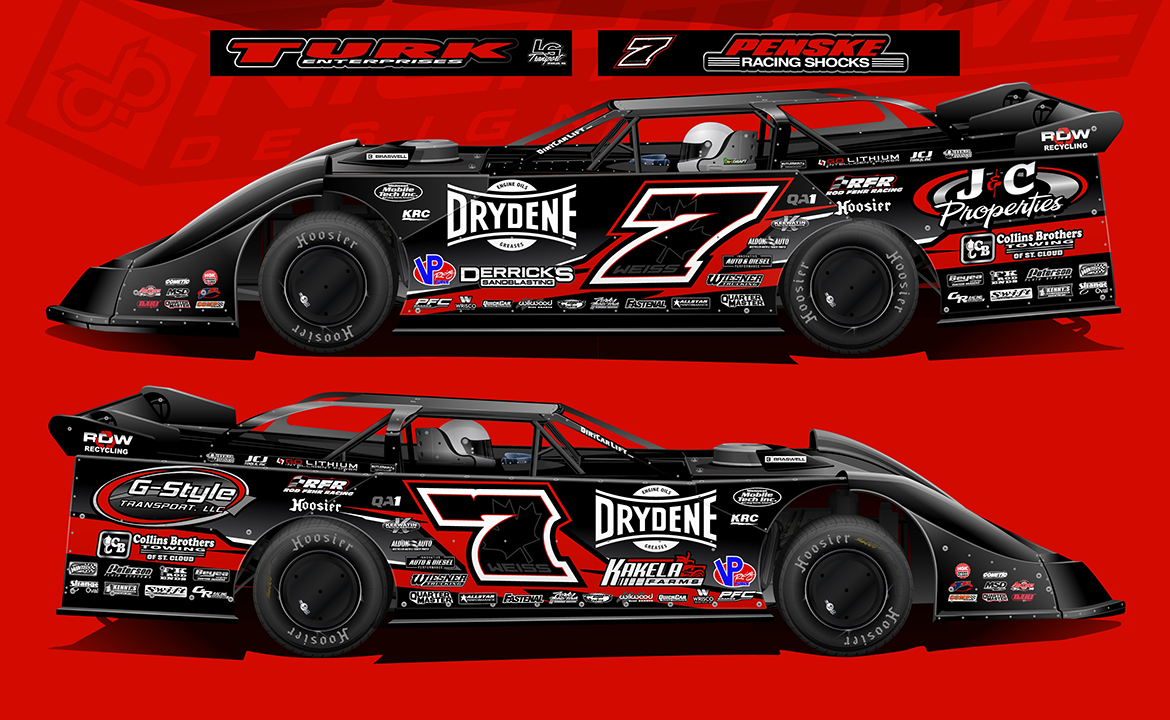 Nightowl Designs Inc.
2019 Rookie of the Year gets a new look for upcoming season, starting at Vado on January 3
By Jordan DeLucia | December 5, 2019 at 2:59 pm

CONCORD, NC – Canada’s favorite Dirt Late Model sensation will be back and bigger than ever in 2020.

The Weiss Racing team will hit the road as part of the full-time World of Outlaws roster for its second consecutive season, this time donning a brand-new graphics scheme featuring Weiss’ signature black base and the traditional Drydene red-and-white.

“We’re pretty excited to be able to be one of those guys who are labeled as the Drydene car. Hopefully, we can get them in Victory Lane at the new track,” said Weiss, of Headingley, Manitoba.

He’ll have his first chance to do exactly that in just 29 days, when the Outlaws head to New Mexico’s Vado Speedway Park for the inaugural Battle at the Border – another new track to Weiss, which will also be new to almost all competitors. But he’s done his homework and will be ready for the first points race on Jan. 3.

“We’re more than excited,” Weiss said. “We watched some footage from the races that they’ve had there, and it looked to be a lot like a track that will suit my driving style and my car.”

Since becoming the Official Motor Oil and DEF of the World of Outlaws and DIRTcar Racing last year, Drydene has made tremendous strides in the motorsports industry, highlighted by a title sponsorship deal made with the Xtreme DIRTcar Series in November. In 2020, Drydene and Weiss will take aim at World of Outlaws Victory Lane on the Late Model side together, as Weiss looks score a number of big checks as the newest member of Team Drydene.

“It’s awesome to see what Drydene’s putting into the sport,” Weiss said. “I think it’s phenomenal how much they can provide. They’re definitely getting their name out there. People definitely know, and if they don’t know, they’re going to know this year who Drydene is and what their goal is.”

Drydene unveiled its line of racing oil, Drydene Racing Formulas (DRF), last month during the Can-Am World Finals at The Dirt Track at Charlotte. Weiss believes it will propel him to a World of Outlaws victory for the first time in his career.

“I’m excited to get to use the products,” Weiss said. “I know it’s proven, but we’re definitely going to put it to the test. They’re not lacking on anything, and they’re not cutting corners, so I know it’s going to be top-of-the-line.”