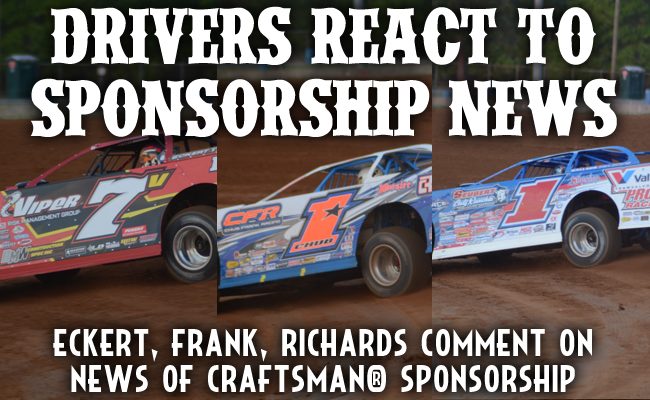 Richards, Eckert and Frank Comment on Craftsman® Partnership with the World of Outlaws Late Model Series

CONCORD, N.C. – Feb. 3, 2016 – On Monday the World of Outlaws Late Model Series and World of Outlaws Sprint Car Series announced a multi-year sponsorship deal naming Craftsman as the title sponsor of both series. In the short period of time since the news broke, drivers and crews from both series have overwhelmingly offered their praise and excitement of what this partnership means for the future.

Josh Richards, Rick Eckert and Chub Frank are three of the most successful drivers in the history of the World of Outlaws Craftsman Late Model Series. With 108 combined wins and four championships between the three of them, their collective knowledge and expertise of the sport is beneficial when describing how much the Craftsman sponsorship means to the series and sport as a whole.

“It’s great to have Craftsman come on board as the title sponsor of the World of Outlaws Late Model Series,” Richards said. “Craftsman has a long history of being involved in motorsports, and it will be beneficial to have the support of a company of that caliber. Dirt late model racing is growing in popularity and I’m really excited to see the potential growth this sponsorship could add to our sport.”

“[The World of Outlaws] have been talking about getting a series sponsor for years, so I am glad to see we finally have one,” Eckert said. “It’s great to see a company like Craftsman come on board. They have been in racing for years, so it’s great to see them partner up with the World of Outlaws. I see dirt racing as grassroots racing, and that seems to be Craftsman’s target group, so I think it will be a great partnership.”

“I’m glad we have a series sponsor, I haven’t seen any details on it yet but it’s a great for the series as a whole and great for us as drivers,” Frank said. “I’m happy its Craftsman sponsoring us, I’ve been using their tools for probably 30 years or longer.”