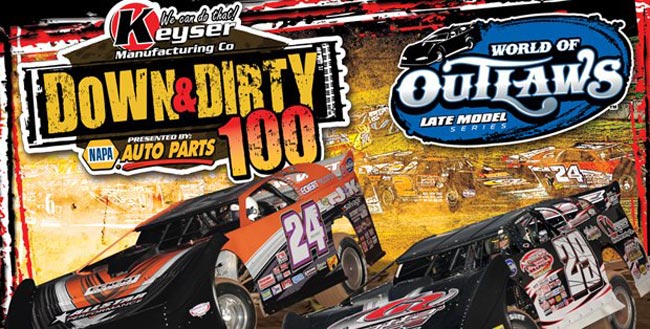 SCOUTING BERLIN: Every entrant in this weekend’s Keyser Manufacturing ‘Down & Dirty 100’ Presented by NAPA Auto Parts at Berlin Raceway will have the same level of knowledge about the track – which is to say, none at all.

Berlin has, of course, operated as a 7/16th-mile asphalt oval since 1966. But the renowned Wolverine State speedway has been covered with more than 300 truckloads of clay for a historic event headlined by the World of Outlaws Late Model Series, setting up a unique situation in which no one starts with an advantage.

The inside track on the $20,000 top prize in the Down & Dirty 100 on Saturday night (Sept. 22) will belong to the driver who most quickly deciphers the tricky layout – and several WoO LMS racers have already visited Berlin Raceway in hopes of learning something, anything, that will enhance their hopes.

One of the WoO LMS regulars who arrived in the area early was Clint Smith of Senoia, Ga. With his hauler parked at Keyser Manufacturing in Coopersville, Mich., Smith made the short drive over to Berlin Raceway on Tuesday with fellow World of Outlaws travelers Tim Fuller of Watertown, N.Y., and Vic Coffey of Caledonia, N.Y.

Smith, 47, only eyeballed and walked the track, but the stop did give him an idea of what to expect when engines are fired for an open practice session on Thursday evening (Sept. 20) and time trials and heat races roll off on Friday night (Sept. 21).

“I think there’s gonna be good racing there,” said Smith, who scored one of his 12 career WoO LMS victories in Michigan, in 2005 at Butler Speedway. “The (surface) was packed good, and it seemed like excellent clay – no sand or grit to it. That usually means it’s gonna be a good, slick surface, so I would say it’s gonna be fast early and then it will slow down and get slick and there will be some real good racing.”

Smith was impressed with the “big, D-shaped track” and its amenities.

“It’s a nice looking place,” said Smith. “All the buildings look refurbished, the grandstands look nice – and there are lots of them – and they’ve got neat group party areas with wooden decks. It looks like a great place to have a big show like this.”

And what does Smith think about his chances for taking the big money back to the Peach State?

“Six years ago it wouldn’t have fit my style,” Smith said of Berlin. “But I think I’m more of a big track racer now and our program has been good this year, so I’m looking forward to it.”

Smith is winless on the 2012 WoO LMS, but he’s been knocking on the door to Victory Lane. He has two heartbreaking runner-up finishes this year – both losses to Darrell Lanigan, the national tour’s most dominating driver this season.

CHARGE OF THE WOLVERINES: The Down & Dirty 100 ranks as the richest dirt Late Model event ever run in Michigan, so naturally the state’s full-fender drivers would love to defend their turf with a memorable victory. Just ask Jeep VanWormer of Pinconning, who has arguably become Michigan’s most well-known dirt Late Model racer.

“It would be huge to win it,” said VanWormer, the only Michigan driver who has won a WoO LMS A-Main, in 2007 at LaSalle (Ill.) Speedway. “It’s exciting to have a race like this in our state. I’m a little rusty because I haven’t raced that much this year, but I’m really hoping to run well in front of the home crowd – well, we’re as ‘home’ as anybody I guess – and maybe get to Victory Lane.”

VanWormer, 37, lives three hours northeast of Berlin and has never seen a race at the track, but he’s heard nothing but good reports about the speedway. “It sounds like it’s top-notch,” he said.

MAN TO WATCH: Darrell Lanigan of Union, Ky., will bid to enhance his already spectacular – and record-setting – 2012 WoO LMS campaign at Berlin. A victory in the Down & Dirty 100 would give him an unprecedented third 100-lap WoO LMS win in a single season and rocket him past the $300,000 mark in season earnings.

A winner of a single-season WoO LMS record 14 A-Mains in ’12, Lanigan leads the tour’s points standings by 204 points over defending champion Rick Eckert of York, Pa., entering this weekend’s action. With only five points races remaining on the 2012 schedule Lanigan can clinch his second career title by merely finishing no worse than 20th in each event.

Lanigan has won a WoO LMS A-Main in Michigan, capturing the 2011 event at Hartford Motor Speedway. Other WoO LMS regulars who have been victorious in tour events held in Michigan include Eckert (last month at Winston Speedway in Montague), Chub Frank of Bear Lake, Pa. (2007 at I-96 Speedway in Lake Odessa) and Smith.

FAST CARS: Berlin Raceway’s roundish shape is expected to produce high speeds by the dirt Late Models – perhaps even faster times than those turned on the pavement by Berlin’s weekly Super Late Models.

“I feel these guys are gonna haul around here,” said Bursley. “I really do feel they’re gonna be faster.”

Bursley said that Canandaigua (N.Y.) Motorsports Park promoter Jeremie Corcoran, a former DIRTcar big-block Modified driver who was brought in to oversee the covering of Berlin’s asphalt with clay, will return this weekend to handle track preparation.

WEEKEND SKED: A full evening of practice for the WoO LMS event and competitors in the weekend’s support divisions is set for Thurs., Sept. 20, from 4-8 p.m. Action will begin on Fri., Sept. 21, with WoO LMS time trials and heat races headlining a program that also includes DIRTcar UMP-sanctioned racing for UMP Modifieds ($2,000 to win), Factory Stocks/Bombers and 4-Cylinders/Mini-StockS. The grand finale on Sat., Sept. 22, features WoO LMS B-Mains and the Keyser Manufacturing ‘Down & Dirty 100’ Presented by NAPA, plus another full UMP Modified show paying $2,000 to win and a Street Stock event.

Gates will open at 3 p.m. on both Friday and Saturday, with racing set to begin at 7 p.m. each day.

With town ordinances prohibiting racing at Berlin Raceway on Sundays, a raindate of Mon., Sept. 24, has been established for the Down & Dirty 100. If Friday night’s program is rained out, all WoO LMS qualifying will be moved to Saturday evening and Friday’s scheduled support-division competition will be rescheduled for Sat., Sept. 29.

POST-RACE FUN: Keyser Manufacturing will host a pig roast in the pit area following Thursday evening’s practice for all competitors with pit bands.

INFO: Fans can purchase tickets on-line and obtain the latest information on the event by logging on to www.berlinraceway.com or calling the track office at 616-662-2051.