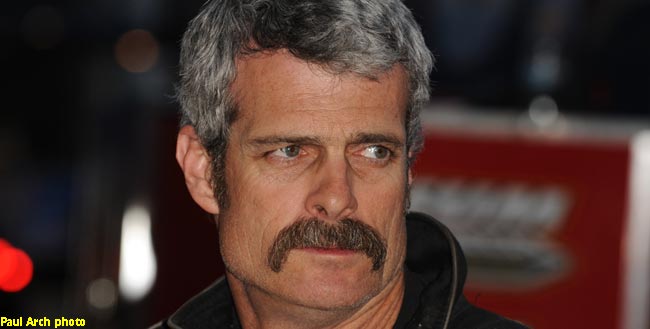 MIDDLEBOURNE, WV – May 21, 2012 – Normally a driver from Wisconsin wouldn’t look toward a track in West Virginia to turn around a moribund season, but Pat Doar is doing just that as the World of Outlaws Late Model Series heads to Tyler County Speedway this Saturday night (May 26) for the inaugural ‘Jackpot 100.’

The quarter-mile Mountaineer State oval was, of course, very good to Doar last year. The 2011 WoO LMS Rookie of the Year’s first-ever visit for September’s ‘Black Diamond 125’ resulted in a 40-lap Qualifying Feature win worth $10,000 and a solid seventh-place finish in the 45-lap ‘Sweet Sixteen’ finale, giving him reason to believe that a return to Tyler County could bring an end to his frustrating sophomore slump on the national tour.

“I really enjoyed running there last year,” bottom-lined Doar, 48, of New Richmond, Wis. “It just seemed like I made all the right changes to the car all weekend. Everything I did to the car made it better.

“Unfortunately, though, I must have used up all my correct moves that weekend because it seems like I haven’t done anything right since then. We’re struggling this year, so hopefully getting back there (to Tyler County) can help us get going again.”

A career-long spec-motor Late Model specialist who only dabbled in open-competition action until tackling the WoO LMS fulltime last season, Doar experienced the best night of his respectable ’11 rookie campaign (seven top-10 finishes, one fast time, five heat wins) at Tyler County. From the time he first laid eyes on the fairgrounds facility more than 15 hours from his bed, he felt oddly at home.

“It kind of reminded me of a track back home that we’ve been running on Labor Day for the last 15 years – Hibbing, Minnesota,” said Doar, who drives a self-owned, black No. 11 Mars Chassis machine. “Everything about the two tracks was pretty similar – they’re both small, round tracks, and everybody’s scratching for every inch of traction they can get. They’re both the ultimate dry-slick kind of deal.

“I just did the same thing to my car that I do at Hibbing, and it worked. I really did feel comfortable as soon as I got out there (at Tyler County).”

While Doar’s Black Diamond 125 Qualifying Feature victory didn’t go in the record book as an official WoO LMS A-Main win (the field was split for the preliminaries), it was impressive. He outdueled Davey Johnson and Mike Marlar in a tense three-car shootout that went right down to the checkered flag.

Doar could only manage a seventh-place finish (after starting third) in last year’s ‘Sweet Sixteen’ finale, but his trip to Tyler County was still successful. Now he returns with high hopes of picking up right where he left off, though he understands that this Saturday night’s 100-lapper – a race that offers a $25,000 top prize from a total purse of nearly $150,000 – will present a new challenge.

“You’re going all the time there, so 100 laps is going to be tough,” said Doar. “There’s really no time to relax. Even if there’s a bunch of cautions, you still get into lapped traffic quick because it’s a small track.

“You gotta have your car right and make the right decisions (for the long distance), but you also have to be up on the wheel the whole way. If you make a mistake, somebody’s going to be there to take advantage.”

Doar brings a modicum of momentum into this weekend’s WoO LMS holiday tripleheader, which also includes 50-lap events on Fri., May 25, at Wayne County Speedway in Orrville, Ohio, and Sun., May 27, at I-77 Raceway Park in Ripley, W.Va. He registered back-to-back ninth-place finishes in his last WoO LMS starts – May 4 at 311 Motor Speedway in Pine Hall, N.C., and May 5 at Swainsboro (Ga.) Raceway – to give him his first top-10 outings since a career-high fifth on Feb. 18 at Bubba Raceway Park in Ocala, Fla. He also reached Victory Lane for the first time this season last Friday night, using a spec motor to capture a WISSOTA weekly event at I-94 Speedway in Fergus Falls, Minn.

It’s certainly been a rough year so far for Doar, who has five finishes of 20th or worse in 11 WoO LMS A-Mains. But the lanky, low-key veteran is confident that better days are ahead.

“I was hoping to start off better this year with it being the second time around for us on the tour,” said Doar. “We’ve just been making all the wrong moves. Whatever I’m doing to my race car hasn’t been working, and then that gets me in compromised situations. I’ve been in three big, grinding wrecks this year (necessitating two ‘clip’ repairs for the same car), but that’s my own fault because I’m running in the back where your odds of getting in wrecks are much greater.

“Technically, I should be about 25th in points, but it seems like other guys are struggling and having some bad luck so I’m hanging on in the top 10 in the points (currently ninth). That’s the only blessing so far this year.

“I’ve been racing a long time so I’ve been through years like this before,” he added. “You’ve gotta take your lumps, and sooner or later it turns around and you start running better. I know things can turn around in a night. You get a couple good laps, and you start building on that.”

Doar is counting on a northern turn in the WoO LMS schedule to assist him in getting back in rhythm.

“There are some nice tracks down south, but I’m just not used to them,” said Doar, noting his problems adjusting to racing in the region that has dominated the early WoO LMS slate. “I don’t even know what that clay is down there. That’s the big problem for me. I get kind of confused about what the feel is to get your car going around the track.

“When I’m up north I have somewhat of an idea about what to do with my car – or maybe my car just works better up north. I don’t know. I just hope I’ll run better once we get back further north because it’s more stuff I’m used to and grew up doing.”

The Jackpot 100, which boasts a top prize that ranks as the third-richest on the 2012 WoO LMS, will culminate the huge ‘Bullring Bonanza’ weekend at Tyler County. The main attraction of the ‘Bonanza’ is a lottery-style raffle offering over $550,000 in cash and prizes – including a $50,000 cash grand prize, new cars, campers, ATVs and vacations – that runs from 11 a.m. to 5 p.m. on Saturday.

Just 10,000 tickets are being sold for the ‘Bonanza’ raffle, which benefits the Tyler County Fireman’s Association. The $100 tickets, which include all-access admission (pits and grandstands) to Saturday night’s ‘Jackpot 100,’ a day-long buffet and entry to Friday night’s country-music concert, are still available for purchase on-line at www.BullringBonanza.org, by phone at 304-771-5661 and 304-758-4411 or at participating retailers.

A full list of prizes can be viewed on-line at the event’s dedicated Web site, www.BullringBonanza.org. Information on Tyler County Speedway is available by logging on to www.tylercountyspeedwayonline.com.

Gates to the Speedway are scheduled to open at 5 p.m. on Sat., May 26 – just as the $50,000 grand prize is given away. Hot laps are set to begin at 7 p.m., followed by WoO LMS Ohlins Shocks Time Trials and heats, B-Mains and the ‘Jackpot 100.’ Also on the agenda is the ‘Let It Ride 55’ for the Renegades of Dirt Modified Tour.

For ‘Jackpot 100’ attendees who opt to not purchase a ‘Bonanza’ ticket, general admission is $35 and pit passes will be $60. Children 10-and-under will be admitted free of charge.

The ‘Bonanza’ drawing will be held rain or shine. In the event of inclement weather, Circle Track Management officials will discuss a rain date for the race with WoO LMS personnel.