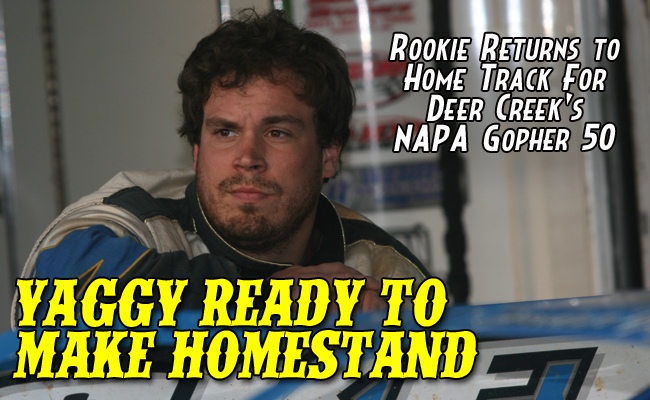 In Return to His Home Track, Minnesota Driver Hopes to Build Momentum for Second Half of the WoO LMS Season

SPRING VALLEY, Minn. – July 15, 2015 – Jordan Yaggy of Rochester, Minn., was especially cheerful when he arrived at Hibbing Raceway for the opening night of the World of Outlaws Late Model Series Wild West Tour on July 9. He had good reason to be as he prepared to race in his home state for the first time this season.

“I’m just glad to wake up in my own bed on a raceday,” Yaggy, the 24-year-old WoO LMS Rookie of the Year contender told a fellow racer as he signed in for Hibbing’s event. “It’s nice not to wake up at home and only drive a couple hours to the track.”

Indeed, Hibbing’s close vicinity to Yaggy’s home was a nice change for the first-year national traveler. But he may be in even higher spirts on Saturday when the WoO LMS visits Deer Creek Speedway for the 36th annual NAPA Auto Parts Gopher 50. The high-banked, 3/8-mile oval, which hosts the final round of the WoO LMS Wild West Tour, is Yaggy’s home track and is located less than a 15-minute drive from his home.

“I’m probably looking forward to this race more than I have any race all season,” said Yaggy, who launched his Late Model career in spec-engine Wissota competition in 2010 before beginning to enter Super Late Model races in 2013. “Besides being close to home, it’ll be fun to get to race in front of my family and friends. We haven’t had the chance to do that much being on the road this year, so it’ll be cool to have a bunch of familiar faces in the grandstands for once.”

Saturday’s race will indeed be a welcomed change for the well-traveled Yaggy and his Arnie Ranta Motorsports-sponsored race team. Prior to the Hibbing event, Yaggy had raced just once this season within a day’s drive of home – if the nearly 500-mile drive to Farmer City (Ill.) Raceway is considered drivable on a raceday – while making long-distance trips to Florida’s Volusia Speedway (more than 1,400 miles from home) North Carolina’s Fayetteville Motor Speedway (nearly 1,200 miles) and New York’s Fonda Speedway (just over 1,100 miles) just to name a few.

To make following the national tour more feasible, Yaggy and his father and crew chief Steve have found places to park their hauler with the team’s two Rocket Chassis inside while flying back home to run the family’s trucking business. Prior to the two-week break in WoO LMS action that led into the Wild West Tour, the team’s hauler had only returned home on one occasion since leaving for Florida in early February.

Other race teams have been supportive in providing Yaggy and crew a place to store and work on their equipment, but even with that assistance, the jump from regional competitor to national traveler hasn’t been easy.

“I’m really enjoying it so far, but it’s definitely been challenging,” Yaggy said. “We’ve kind of been spread out having to work at other peoples’ shops. We really appreciate all the help we’ve been getting out on the road from guys like (former WoO driver) Clint Smith, (car owner) Tim Logan and the guys at Rocket. But it’s tough when you’re not getting your stuff at home. It’s hard to get into a routine and stay on top of things when you’re operating the way we’ve had to this year.

“We knew it was gonna be a stretch as far as all the travel and everything, especially since racing isn’t our living. We’ll get back home Sunday or Monday from racing and you basically take your focus away from racing the next four or five days and you’re not around the car at all to tinker with things.

“I think that definitely puts you behind when you fly back and go to the next track. It’s been a struggle getting used to that, but as the year goes on, we’re getting better at it and getting a little more balanced.”

The stress of fielding a team on a national tour has had its effect on Yaggy’s on-track performance. In 23 WoO LMS events this season, Yaggy has just one top-10 finish in 17 A-Main starts with a pair of Last-Chance Showdowns marking his only preliminary race wins. He’s currently 13th in the series points standings, well behind fellow first-year competitor Brandon Overton of Evans, Ga., in the tour’s Rookie of the Year chase.

Those statistics are disappointing for a driver who made all six A-Mains in the six WoO LMS events he entered last season and scored two heat race wins while earning one fast qualifier award.

“If I was to give a mid-season letter grade I would say that we’re probably a C,” Yaggy said. “We had high expectations after last year and the way we ran in those six races. We were qualifying well and heat racing well and progressing toward putting complete nights together. Now, we’ve just really been missing the consistency it seems like. We’ll either qualify well and not finish up the rest of the night or not qualify well and instead get it going by the feature.

“We haven’t put the runs together like we’d like to, but I really think I’ve learned a lot through the first half of the year to kind of know what it takes to really put a complete night together. We’re kind of hunting top 10s like a lot of guys hunt wins, but I guess that’s just part of pulling into a new city and a new track every night and racing against the best guys in the country. It’s part of the learning curve.”

The good news for Yaggy, is he has the chance to turn around his rookie campaign in the second half of the season, beginning with Deer Creek’s event on Saturday. With only a driver’s best 25 finishes counting toward the rookie points, Yaggy still has a shot at challenging Overton for the prestigious title.

Even without considering the rookie points chase, Deer Creek presents a great opportunity for Yaggy to build momentum toward the rest of the season.

“We’ve been looking forward to it since the beginning of the year,” Yaggy said. “I’m really hoping it’ll kind of provide a shot in the arm for me and our team. If we can get a good run, I think it’ll really energize us for the second half of the season and help get us going like we need to be.”

Adult tickets are $30 with reserved seating while children 12 and under are $15. Pit passes are $35. For track and camping information call 507-346-2342. For ticket info call 1-877-DCS-RACE. Visit www.deercreekspeedway.com for general information.