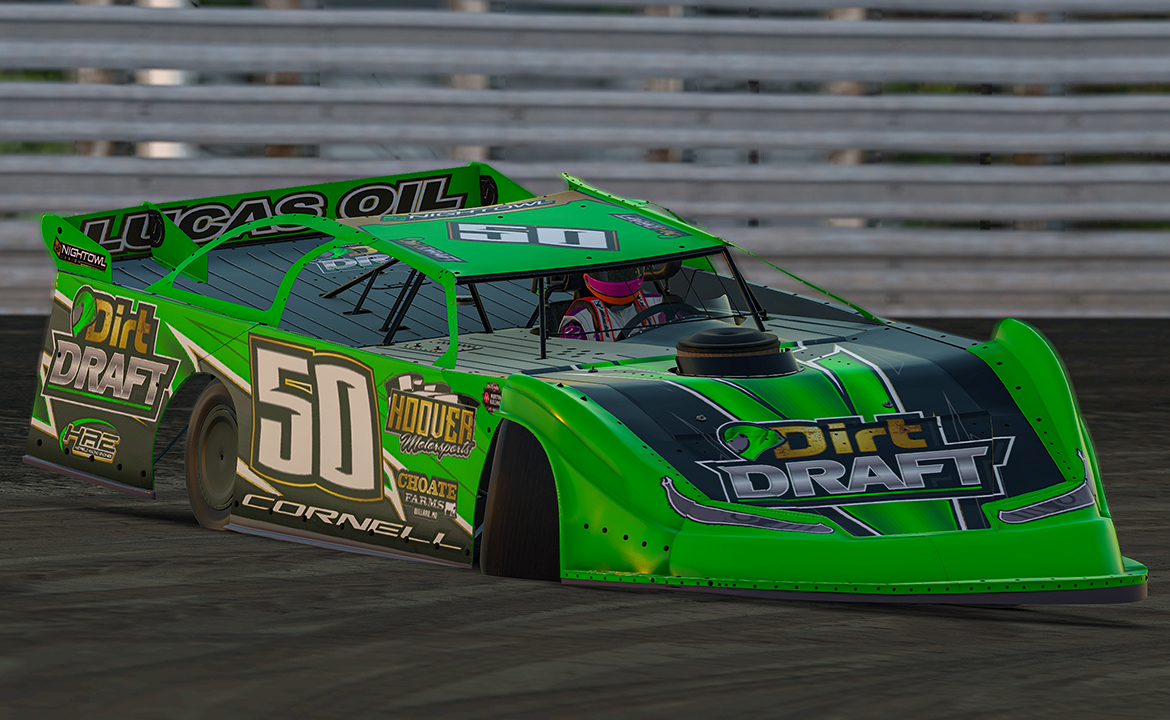 CONCORD, NC – A big iRacing win on national television, a shiny new sponsor on the side of his virtual ride, and a return to the real track for a little testing session this past weekend has Super Late Model young gun Kaeden Cornell in high spirits (as usual) this week.

Cornell, of Willard, MO, has been among the top-rated iRacers competing with the World of Outlaws over the past few weeks. His first four finishes were on the podium, as are his previous two. Last Tuesday, he finally cashed in for that elusive first win at virtual Eldora Speedway, broadcasted live on CBS Sports Network.

“I probably sounded like a fool on CBS when I went and did my whole Ric Flair impression, but man, I was pumped,” Cornell said. “I’ve ran second and third, and that’s all I had done. Finally, I won one, and I went hoarse right after the race, yelled at the computer.”

It’s true, Cornell’s bright and humorous on-air personality had him very excited after the win as he talked (or shouted) with CBS Sports host Dave Rieff. He frequently finishes in a spot to be featured in the Morton Buildings post-race interviews on the DIRTVision shows, and certainly gave everyone a chuckle in his first post-race chat on CBS last week. But after the exciting finish that saw him come back from 13th to the lead in under 25 laps, making the late pass on wrecking leaders Ashton Winger and Nick Stroupe to get the win, it’s hard to blame him for his enthusiasm.

“I hated it for [Winger] because I think he had it all wrapped up. Then, [Winger and Stroupe] got together and it opened the door for me. It was just there for the taking, I was right place, right time. Then, I just held on for dear life,” Cornell.

“My car – that thing looked like it had been through a demolition derby. But, we just kinda held on once we got the lead, and the cards just fell my way, finally.”

The 19-year-old’s pleasant attitude towards the sport (and life in general) and Midwestern accent have certainly made him a standout on his own, never mind the great finishes. But Cornell says it’s just always been a part of him.

“My mom and dad – they call me ‘Special K’ all the time, so I don’t know, I’ve been this way forever,” Cornell said with an audible grin. “Back when I was go-kart racing, people used to tell me to keep my helmet on at all times so I didn’t say anything dumb.”

This past weekend, Cornell got to take his Hatfield Racing Engines-powered Rocket XR1 Chassis out for a spin on the real track, which gave him a much-needed boost of morale as some tracks around the country slowly begin their re-opening process. His slick white/orange/blue car colors were also featured in the virtual world as well, for the first few iRaces with the Outlaws. Then, he received a phone call with some great news.

“DirtDraft called and told me they wanted to sponsor my stuff, and they told me Mike McKinney [referred them to] me, and I was like, ‘Well, I’m glad I didn’t get mad at him or anything!’ Kinda funny how that deal worked out,” Cornell explained.

Cornell’s referring to a situation in the second Invitational race shown on DIRTVision back on April 6, where he and McKinney made some contact racing for position at the head of the field at a critical moment in the race. Both were able to recover to claim finishing spots on the podium, but Cornell’s cool composure and description of the incident as “a racing deal” earned him the reference to the head of his new sponsor, which he’s since displayed on his virtual Black Diamond Chassis ever since.

A friend of Cornell’s, who now works for Shreveport, LA’s Ronnie Stuckey (owner of Black Diamond), also mentioned his name to Stuckey, who reached out to him about putting Black Diamond on his virtual spoiler. Collectively, Cornell’s been very appreciative of the connections he’s made since starting his World of Outlaws iRacing campaign.

“Really, the sponsors are what I think [have benefitted most]. We’re not racing right now, so it really helps in getting out our sponsors, that’s a big deal,” Cornell said.

“They’ve all treated me well, and I just hope I’ve done the same for them.”

Cornell’s sim racing background also shines quite a bit of light on his recent streak of iRacing success. A former regular on the dirt track sim platform rFactor, Cornell spent some time on the virtual asphalt divisions getting acclimated to iRacing in its pre-dirt days. He said he was never able to take it as seriously as he has been lately because of his real-world racing ventures. But now, it’s become a major part of his weekends indoors.

“This is the first time I’ve ever taken it serious, but I’m glad I did because, heck, you’re running for $1,000 every time you get on the racetrack,” Cornell said. “I guess it’s just the competitive nature in racing, I just wanna win the dang thing. It probably didn’t have to pay anything; I’d still want to win it.”

The hot spotlight and big stage of national television provides any invited driver with the opportunity to make a big statement and show off their talents. With an average finish of 4th across his eight World of Outlaws iRacing starts, Cornell’s certainly done that. He said it’s brought him several phone calls from friends nearly every day asking about how he did in his last iRace.

“For me, it’s really letting me get in front of a whole other audience that I probably wouldn’t have gotten to race against. At least, not for a while. The exposure that I’ve gotten from the deal is just crazy,” Cornell said.

Just like walking through the pit area at a real track and making competitive relationships with other drivers on the track, Cornell said he’s been making quite the new friends list online with his comical character and clean driving style.

“McKinney – cracks me up. But probably the funniest guy on there is Ashton Winger – that dude is hilarious, he’s funny as heck! But me, I always keep my microphone closed, cause I’ll probably say something stupid and they’ll all make fun of me,” Cornell said with a laugh.

“I don’t know, I think I’m always kind of a goofball, I guess it just comes with me. Hopefully, no one holds it over my head!”

See Cornell and the rest of the virtual Outlaws take on a two-day doubleheader at iRacing’s Volusia Speedway Park – Monday night on DIRTVision and Tuesday night on CBS Sports Network.