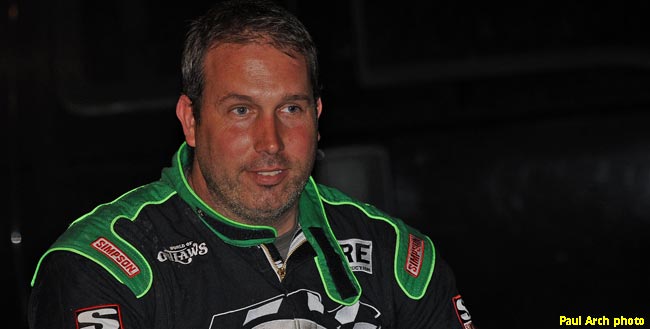 No surprise there, of course. The standout driver from Fayetteville, Ga., is a former winner of the marquee World of Outlaws Late Model Series event at the quarter-mile oval, capturing the race’s $20,000 top prize in 2009.

“I hated that we didn’t get to go to Farmer City last year,” Clanton said of a bullring known for its intense action. “It’s not only where I got one of the biggest wins of my career, but it’s also a real cool place that I like running at. I’m glad we’re going back.”

The Illini 100 is returning to its birthplace, rekindling memories of the exciting competition that prevailed when Farmer City hosted the event from 2008-2010. Uncertainty with the track’s promotional team forced WoO LMS officials to schedule the 2011 Illini 100 at LaSalle (Ill.) Speedway (inclement weather ultimately caused the cancelation of the race), but now Jeff Hammer is firmly at the helm of the venerable speedway and ready to bring the blockbuster weekend ‘home.’

And with this week’s arrival of Spring bringing temperatures approaching 80 to central Illinois, anticipation is building among fans and teams for two huge nights of WoO LMS racing at Farmer City. Advance-sale tickets are selling fast and are available on-line at www.worldofoutlaws.com/tickets or by calling the event hotline at 877-395-8606.

Clanton, 36, is one of the racers itching to get to Farmer City. He will enter the Illini 100 on a high note, buoyed by a strong start to the 2012 WoO LMS campaign (third in the points standings with four top-five and five top-10 finishes in six A-Mains) and hot off his first win since joining the Kennedy Motorsports team.

“I feel real confident about our chances at Farmer City because we’ve been running good,” said Clanton, who broke into Victory Lane on March 17 in the Jimmy Thomas Memorial at East Alabama Motor Speedway in Phenix City, Ala. “We’ve had a fast, top-five car every time we’ve unloaded this year. To have that is pretty exciting. You can’t wait to get to the next race when you’re running like that.

“And it seems like the longer the run, the better we get, so I feel really good about going 100 laps at Farmer City.”

Clanton also knows how to get the job done at Farmer City. He’s one of just two drivers to win the Illini 100, joining ’08 and ’10 victor Billy Moyer of Batesville, Ark.

The Peach State star’s 2009 Illini 100 triumph came in dramatic fashion – a trademark of the early-season event, which has gone to the wire with the outcome in doubt in each of its three editions. Clanton spent most of the distance chasing Brian Birkhofer of Muscatine, Iowa, before finally slipping by to grab the lead on lap 94.

“The most memorable part of it for me was sitting there hounding Birkhofer for so many laps,” said Clanton, who beat Birkhofer to the finish line by less than a car length. “He finally messed up just a little bit to let me get by him. He pushed in (turns) three and four and I drove by him down the front straightaway on the bottom. Then I just got back to the top and held on from there.”

Clanton was his usual demonstrative self during the post-race ceremonies, pounding his fists on the roof of his car and whooping it up with his crew. It wasn’t the richest or most prestigious win of his career – he won dirt Late Model racing’s top crown jewel, the DIRTcar UMP-sanctioned World 100 at Eldora Speedway in Rossburg, Ohio, in 2008 – but it was an important checkered flag.

“It ranks up there in the top three or four wins that I’ve had,” said Clanton, who has also won 100-lap WoO LMS events at Lernerville Speedway in Sarver, Pa. (2010 Firecracker 100) and Pittsburgh’s Pennsylvania Motor Speedway (2006 Pittsburgher 100). “The World 100 definitely is my greatest win, but the Illini is one of the biggest races of the year for the World of Outlaws so that makes it special. It’s also cool just to be able to win in Illinois, which has some of the best Late Model racing in the country.”

Farmer City is at the epicenter of the full-fender competition in the Land of Lincoln. It’s a venerable fairgrounds track that presents a unique challenge to all entrants hoping to collect the Illini 100’s $20,000 first-place check.

“It’s probably one of the most demanding racetracks that we go to,” said Clanton, who this year is driving Capital Race Cars for Kennedy Motorsports as a teammate to John Lobb of Frewsburg, N.Y., after spending nearly a decade with Ronnie Dobbins’s RSD Enterprises team. “To finish any 100-lapper is tough, but to get through 100 laps there, with how fast and small the racetrack is, is an accomplishment.

According to Clanton, adding even more luster to the Illini 100 weekend is Farmer City’s down-home atmosphere.

“The fans always are excited to see us there,” said Clanton, who has traveled the country as a WoO LMS regular since 2005. “There are always certain places in the country you go to that are what I call real ‘fan-friendly,’ and Farmer City is one of them. It’s just a neat place, from the covered grandstand to the way the track is laid out to let fans park their cars and campers all the way around turns one and two.”

The Illini 100 weekend at Farmer City Raceway will feature time trials and heat races on Fri., March 30, and B-Mains and the 100-lap A-Main on Sat., March 31. The big addition to the weekend this year will be a 50-lap DIRTcar UMP Modified feature offering a $5,000 top prize, with the open-wheel division running heat races on Friday evening and B-Mains and the extra-distance headliner on Saturday night.

This year’s Illini 100 weekend will also include racing for Farmer City’s weekly support classes. The DIRTcar UMP Pro Late Models, Street Stocks and Hornets will run complete programs on Fri., March 30, and the Pro Late Models and Street Stocks will return on Sat., March 31, to battle in regular racing cards.

An open practice session will be held on Thurs., March 29, from 6-10 p.m. Pit gates are tentatively scheduled to open at 4 p.m.

Pit gates are scheduled to be unlocked at 12 noon on Friday and Saturday, with hot laps set to start at 6:30 p.m. on Friday and 5 p.m. on Saturday and qualifying to immediately follow.

Illini 100 ticket prices (reserved and general admission) are $15 (Friday) and $30 (Saturday), with children’s tickets (ages 12-and-under) priced at $5 (Friday) and $15 (Saturday). Two-day tickets cost $40 (adults) and $20 (children) if purchased in advance, while pit passes are $25 on Thursday, $30 on Friday and $40 on Saturday with a two-day band available for $65 and a three-day band (including Thursday’s practice) offered for $85. DIRTcar members receive a $5 discount on pit-admission packages.

Seats can be reserved in advance for both nights on-line at www.worldofoutlaws.com/tickets or by calling the event hotline at 877-395-8606. Pre-race reserved-seat ticket sales will conclude at 5 p.m. on Wed., March 28, and then all tickets will be general admission.