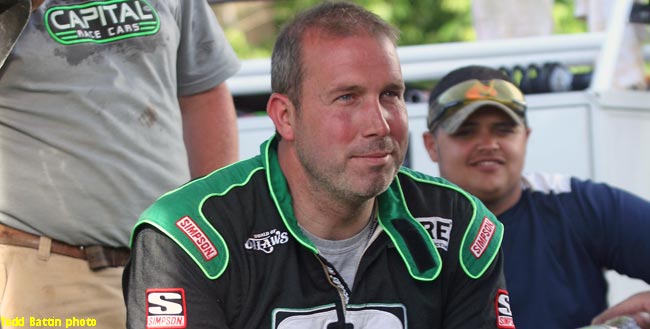 ROSSBURG, OH – If Shane Clanton had his druthers, this year’s Dirt Late Model Dream Presented by Ferris Commercial Mowers on June 6-8 at Eldora Speedway would go exactly like the 18th running of the sport’s richest event in 2012.

Clanton, of course, likes how that race weekend turned out.

“It went great,” said the standout World of Outlaws Late Model Series regular from Zebulon, Ga. “I won $100,000, the biggest race of the year. It don’t get better than that.”

But as Clanton well knows, he can’t take an identical path to Victory Lane in the 2013 DIRTcar UMP-sanctioned spectacular. With a unique new format in place that is expanding the Dirt Late Model Dream by Ferris to three nights of action, his quest to make history as the race’s first winner in back-to-back years will have to go down a slightly different road.

While the traditional format for this Saturday night’s Dream finale remains (six 15-lap heat races, C- and B-Features, ‘C’ and ‘B’ Scrambles, the 100-lap A-Main), how drivers get to that much-anticipated evening has changed. For the first time full racing programs will be contested on Thursday and Friday nights, providing fans more action and teams more track time and opportunities to earn cash.

Drivers will be aligned for Saturday night’s heats by their best lap time turned during the multi-car time trials run on both Thursday and Friday. Each night’s qualifying results will also split the field into two groups that will then compete in separate cards of heat races, B-Features and 25-lap A-Mains paying $2,500 to win on Thursday and $5,000 to win on Friday.

For a veteran Eldora hand like the 37-year-old Clanton, the shuffling of the Dream’s deck adds some anxiety to an already pressure-packed weekend – but not too much. He said he likes the extra chances to make money that the Thursday/Friday double-feature format has set up, so the biggest stress-maker is just a variant of drivers’ usual concerns during crown-jewel events at Eldora.

“Qualifying is what I’m worrying about,” Clanton said of the multi-car time trials on Thursday and Friday that will replace the Dream and World 100’s customary Friday qualifying program (one car at a time, two rounds, two total laps). “You’re always worried about your qualifying lap more than anything else. That’s the way it’s always been because starting up front in a heat race is so important.

“I guess nobody will really know what’s gonna happen until we get there, but I’m sure it’s still gonna be all about luck. The number you draw to go out for qualifying is still probably gonna be a big deal.”

Clanton will go to the post during Dream weekend with the same Kennedy Motorsports Capital Race Car and Clements engine he used to win last year’s event. The car has been reworked with a new front clip because Clanton crashed it during last September’s World 100 weekend at Eldora, so it should be like new since Clanton hasn’t raced it since it came off the jig during the off-season.

The machine definitely worked well last year on Eldora’s high banks. There is no denying that.

“When I hot-lapped (for last year’s Dream) we were too tight, so we freed it up for qualifying and it responded to what we changed,” remembered Clanton, who timed 11th-fastest in 2012. “Then, in the heat race, I won (from the outside pole) but didn’t tighten up near enough, so I figured I could tighten up for the race and I did.

“I was right, because it was good. I led every lap (of the A-Main off the outside pole), but I knew I had a good enough car to pass them guys if I would’ve had to. (Polesitter Brian) Shirley beat me down the front straightaway at the start, but I just turned left, mashed the gas and went by him. I knew I had a good car then. Lapped traffic got kind of scary there at the end because I was trying to save my tires and not hurt my equipment, but if I had to do some basic moving I could have.”

Not surprisingly, Clanton is chomping at the bit for his return to the Big E.

“I can’t wait to get back there,” said Clanton, who has been making annual treks to Eldora for a decade. “I’d race at Eldora every week if we could. I love that place. I like the atmosphere and I like the racing. It’s fun, it’s fast and it’s intense. I’m always on the edge of my seat driving there. Every lap there you don’t know if you’re gonna hit the fence or spin out.

“It’s definitely a challenging place and some guys might not like it, but I’ve always had a good car there for some reason. It fits the way I drive I guess. It’s just one of those racetracks that we run good at, that suits me.”

Clanton’s Eldora acumen is evident in his performance record there. He’s also the 2008 winner of the track’s prestigious World 100, making him one of just five drivers with victories in both of the half-mile oval’s marquee dirt Late Model events. That select group also includes Scott Bloomquist of Mooresburg, Tenn., Donnie Moran of Dresden, Ohio, Billy Moyer of Batesville, Ark., and Jimmy Owens of Newport, Tenn.

A second-generation racer who grew up watching his late father Billy drive dirt Late Models, Clanton understands the importance of having his name on that list of Dream and World 100 victors. The enhanced stature he attained following his 2012 Dream victory is one of the reasons he focuses so intently on the event.

“We put pressure on ourselves at every race, but do we emphasize the Dream a little more?” asked Clanton, who enters this year’s Dream as a serious contender for the 2013 WoO LMS championship. “Yes, because it’s got so much money on the line (over $300,000 in total purse awards this year) but also so much prestige to go along with it. In the Late Model world, you need to win a race at Eldora to say you had a complete career. That’s just basically a fact.

“After last year’s Dream, it sunk in about a month later that it’s only me and four other guys who have done that (won the Dream and the World 100),” he continued. “To accomplish that is pretty special – and it just makes you want to go back to try and win those big races multiple times.

“Yeah, I won the World and I won the Dream, but now I want to go back and win multiple Dreams and multiple Worlds. I’d like be like Scott (Bloomquist) and Billy Moyer. I’d like to one day be in their shoes with multiple wins in both races – and I’d like to win them both in the same season like Moyer did a couple years ago.”

Clanton certainly will bring plenty of momentum into this weekend’s Dream competition. In fact, he’s coming off a convincing WoO LMS victory just days ago, on June 1 at Stateline Speedway in Busti, N.Y.

What’s more, in his second season driving for Phoenix, Ariz., team owner John Kennedy, Clanton is working on arguably the best campaign of his racing career. His score at Stateline was his fourth of 2013 on the WoO LMS, tying him with the tour’s defending champion (and former Dream winner), Darrell Lanigan of Union, Ky., for top-winner status on this year’s series and matching his personal single-season high for victories on the circuit. And through 18 WoO LMS events this season he ranks a close second in the points standings to Josh Richards of Shinnston, W.Va., with 13 top-five and 16 top-10 finishes – an incredible improvement from this point last year, when he entered the Dream ranked a distant fourth in the WoO LMS points standings with no wins, five top-five and eight top-10 finishes in 15 A-Mains.

With the potential for 31 events and 567 laps of green flag racing from June 6-8, the 19th annual Dirt Late Model Presented by Ferris Commercial Mowers is a can’t-miss event. Fans can purchase tickets and campsites for the Dream by going online to www.EldoraSpeedway.com or contacting the Eldora offices at 937-338-3815.

Fans who can’t make it to Eldora in person this weekend can still watch all the action live by purchasing the live Pay-Per-View video broadcast of all three nights of action that is available at www.EldoraSpeedway.com.

In addition, fans can go to the World of Outlaws Late Model Series website at www.woolms.com throughout the Dream weekend to read blog-style live updates that will include news, notes and results.