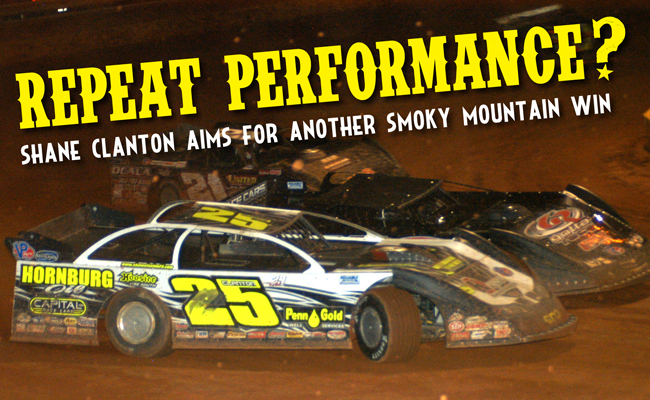 Smoky Mountain Ready for Visit from World of Outlaws May 17

MARYVILLE, TN (May 12, 2014)-Billy Ogle Jr. of Knoxville, Tenn. is one of the top competitors in the East-Tennessee area and feels he will be a threat to win as the World of Outlaws Late Model Series makes their annual visit to Smoky Mountain Speedway.

The track, located in Maryville, Tenn. will host the WoO LMS on Saturday Night May 17th for another $10,000-to-win event and will mark the second-straight year the WoO travelers will invade the track located only minutes from Knoxville, Tenn. Shane Clanton of Zebulon, Ga. claimed last year’s visit to Smoky Mountain.

Ogle already has two wins on the season coming at his home track with the Spring Nationals and Southern All Stars but that prestigious WoO LMS victory still eludes his vast racing resume. “It would be awesome to win at home,” stated an anxious Billy Ogle Jr. “We’ve been running really well at Smoky Mountain so hopefully we can keep up that pace when they come into town.” Ogle’s only national touring victory came at Volunteer Speedway during a Lucas Oil Late Model Dirt Series event.

The 49-year-old veteran ran really well in the tour’s inaugural visit to the speed-plant located in the Foothills of the Smoky Mountains. “We ran fifth last year, you got to have a lot of luck with the Outlaws the way their format is, they have the re-draw draw and stuff but you got to be good enough to get in that draw so hopefully we can get in the re-draw and maybe have a close starting position up front but it would be one of the biggest wins of my career for sure if I could get an Outlaw win,” said Ogle.

Ogle, who competes at every single event at Smoky Mountain Speedway, a premiere track in the Southeast, feels he has a slight edge when the Outlaws do roll into town. “I think we do, I run there a lot and you would have to think you have an edge there,” chuckled Ogle. “I know that’s a little disadvantage to them because I run the track so much but you know I would think that we do have an edge overall, you never know what the track’s going to be like on some of those nights when they come in, sometimes it’s different, but hopefully it’ll be about how it’s been and we’ll be ready for them,” said Ogle.

Ogle feels his Larry Garner-owned Rocket Chassis race car has been strong of out the gate so far this season. “It’s been really good. Normally we don’t get to winning until about July it seems like, so having the wins early in the year I think have been a big plus for us and would like to continue our pace and maybe be able to do what we normally do in the summer months and keep winning.”

“We had a lot of second place finishes last year and some of those have transferred into wins this year, we’ve had a little bit of bad luck but I believe we’re on pace to maybe have one of our best years,” stated an enthusiastic Ogle.

Expected to compete along with the WoO LMS regulars include Tennessee’s Tommy Kerr of Maryville, Mike Marlar of Winfield, Skip Arp of Georgetown, Stacy Boles of Clinton, Mark Vineyard of Powell along with Brasstown, N.C. hot-shoe Ray Cook, Chris Madden of Gray Court, S.C. plus many more.

At Smoky Mountain Speedway for the “Mountain Outlaw 50” presented by Ole Smoky Moonshine on Saturday Night May 17th the pit gates will open at Noon Eastern with the grandstand and tier parking gates opening at 3:00 pm and the driver’s meeting will be at 7:30 pm and hot laps shortly after that. The Crate Late Models will be racing for $1,500-to-win and the Street Stocks will race for $500-to-win. Adult general admission is $25.00, while adult tier parking admission is $30.00 and adult pit passes going for $40.00.

A full show of Practice, Ohlins Shocks Qualifying, Heat Races, Last Chance Showdowns and 50-lap mains will be on tap when the World of Outlaws Late Model Series competitors roll into Smoky Mountain this Saturday.

For the 201, Smoky Mountain and Duck River swings, competing teams will be restricted to using Hoosier 1300, 1350, 1450, 1600 and 55-compound tires or American Racer 44-, 48- and 56-compound rubber. All of the tires will be required to punch a minimum ’40’ reading when checked with a durometer. For 201 Speedway only, the Hoosier 1425 compound will be allowed in addition to the above mentioned Hoosier compounds.