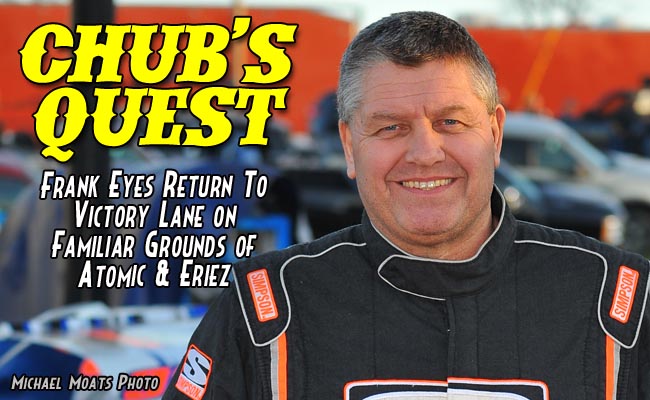 Chub Frank has extra reason to be excited for this weekend’s World of Outlaws Late Model Series events with the national tour set to visit a pair of tracks that are particularly memorable to the veteran Bear Lake, Pa., driver.

Frank, 53, will join the rest of the WoO LMS touring stars in visiting Atomic Speedway in Chillicothe, Ohio, for separate WoO LMS programs on Friday and Saturday before heading to Eriez Speedway in Hammett, Pa., for another event on Sunday.

Both tracks hold special memories for Frank. Eriez played a key role early in Frank’s life and through the budding years of his racing career, while Atomic produced two of his more notable victories.

“It’s funny that they’re on the same weekend because they’re both kind of special to me,” said Frank, the WoO LMS veteran who has seen a resurgence on the tour after switching to Longhorn Chassis over the offseason. “To be honest, I feel good about any place we go with these new cars, but I’m definitely looking forward to taking them to both of those tracks for the first time.”

Located less than an hour from his shop, Eriez was one of the tracks where Frank launched his racing career as a teenager in the late 1970s. His father Jerry built the track in the 1960s and promoted it, along with nearby Stateline Speedway in Busti, N.Y., for many years while Frank honed his driving skills.

Frank’s early success at Eriez became the foundation of what was to become one of the sport’s more lustrous driving careers. Among Frank’s career highlights are two notable wins at Atomic, which was formerly known as K-C Raceway before Brad McCown purchased the track in 2013 and changed the track back to its original name.

“I’m definitely looking forward to both tracks,” Frank said. “I like going to Eriez just because I’ve been around it my whole life and really got my career going there.

“We’ve had a lot of success at Atomic over the years. We won the big Outlaws race there and we won the Dirt Track there. You always remember big wins like that.”

Besides its extra payout, Frank’s ’09 WoO LMS victory at Atomic is significant for another, less memorable reason: it’s his most recent WoO LMS win. Since that triumph on Aug. 22, 2009, which ironically was the second of back-to-back WoO LMS wins for Frank, his series win total has remained stuck at 16 victories.

Of course, Frank would like to prevent his victory lane hiatus from eclipsing six years on Saturday with a victory in Friday’s weekend opener at Atomic, or to ended it shortly after with a win on Saturday or on Sunday.

Winning this weekend certainly isn’t out of the question. While Frank’s lengthy dry spell doesn’t exactly suggest that his 17th-career WoO LMS victory is imminent, his upswing in his new Longhorn this season does.

With 10 top-five finishes this season, Frank is a solid third in the series point chase and is on track to have his best season statistically since ’09. And he’s been close to winning on multiple occasions this year with four runner-up finishes.

“We’re behind a bit on some of the technology stuff. There’s a lot that goes on with these cars that the other guys are messing around with and trying. I don’t have the time or the help or the finances behind us to really keep up with that stuff. We’re working on it to catch up some, but for the most part, we make do with what we have.

“Our cars are good the way they are, but I know they can be better. Once we do get them better, I expect to be winning on a regular basis. Right now, we’re trying to win, but we’re still behind a lot of these guys a little bit.”

While circumstances don’t make Frank’s road to victory easy, he’s not ruling out a breakthrough this weekend. And even if visits to Atomic and Eriez don’t produce a victory, Frank is optimistic a WoO LMS triumph is in his near future.

“It’s been a while, but we’re still here to win races,” Frank said. “Sure, it would be nice to win at Atomic or Eriez – or both. It could happen. But I’m realistic and if we don’t win, I know we’re going to eventually as long we as just keep diggin’.”

Frank is part of a star-studded list of WoO LMS national travelers heading for Atomic and Eriez this weekend. That group is led by series points leader Shane Clanton of Zebulon, Ga. Riding the momentum of nine WoO LMS victories this season, Clanton leads the WoO LMS standings over three-time series champion Josh Richards of Shinnston, W.Va. Frank is third in the chase for the $100,000 WoO LMS champion’s paycheck with 2011 champion Rick Eckert of York, Pa., and 2006 champion Tim McCreadie of Watertown, N.Y., rounding out the top five.

Gates at Atomic Speedway open at 4 p.m. on both Friday and Saturday. Friday’s program features a 40-lap, $8,000-to-win WoO LMS A-Main, while Saturday’s A-Main will be 50 laps and will pay $10,000 to the winner. Adult general admission prices are $22 for Friday and $25 for Saturday. Children ages 12 and under are free. Pit admission is $35 for adults and $20 for children. For more information, visit the track’s website at www.atomicspeedway.net.

At Eriez Speedway on Sunday, gates open at 4:30 p.m. with at 6. The night’s program will feature a 50-lap, $10,000-to-win WoO LMS A-Main. Adult general admission is $30, while children ages 6 to 15 and children 5 and under are free. A general admission family package of two adults and up to four children is $75. Pit entrance is $35. Visit www.eriez-speedway.com for more information.