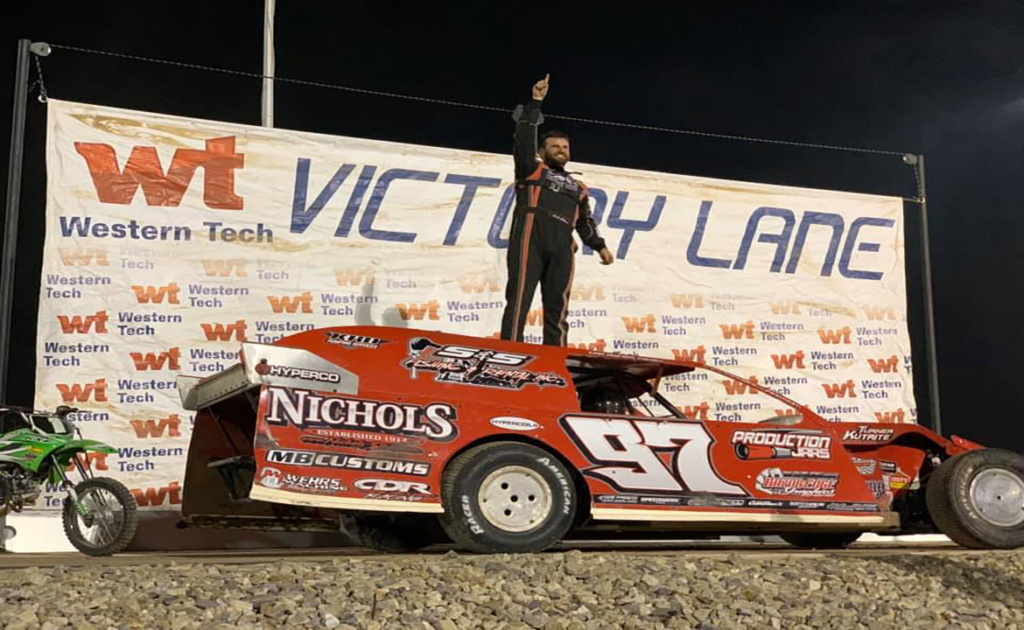 VADO, NM – With just over nine weeks remaining before the 2020 World of Outlaws Morton Buildings Late Model Series season kicks off at the new Vado Speedway Park, several drivers across multiple different divisions of racing have now had the opportunity to turn laps around the track in local and regional competition.

This past weekend, Series regular Cade Dillard made the 14-plus-hour tow from his hometown of Robeline, Louisiana, and climbed back into the seat of his S&S Fishing & Rental Inc. #97 Modified to compete in the Rancho Milagro USRA Fall Nationals event for a chance at over $20,000.

“Thriller” made the most of his first look at the track, collecting the victory in the preliminary Feature on Friday night, later dominating the 24-car field on Sunday for a $20,101 check, leading all 50 laps en route to his second win in three nights.

After all was said and done, Dillard returned home with a big smile on his face and a lot of positive takeaways from his first experience at Vado. Especially, the track and surrounding amenities.

“The facility is definitely top-notch,” Dillard said. “Everybody involved has done a fantastic job with it, and it’s definitely one of the nicest in the country.”

“The track surface was very nice, very racy the whole weekend. No issues keeping it smooth, it got slick and raced really well, and I’m really excited to get there with the Late Model.”

Dillard said the three-day show moved along very smoothly as well – a testament to the staff and safety crew employed under the management of track owner Royal Jones and GM Rue Stone.

“Everything went really smooth there. Everybody involved on the track did a good job. As far as the wrecker service, they got everything cleaned up fast with no long cautions. Everything was run very professionally, and I’d definitely rate it one of the top facilities in the country,” Dillard said.

When the Outlaws finally get to grace the track on the weekend of Jan. 2-5, 2020, many other parts of the continental United States will be covered in snow. But not New Mexico. Dillard said the warm weather, the big-name drivers anticipated to attend, and the state-of-the-art establishment will be a big pull factor for both the locals and the nation’s die-hard Dirt Late Model fans to come out and enjoy four nights of on-track action.

“For one, it’s in better weather than most places in the country that time of year,” Dillard said. “Plus, it’s not very often you get to attend a race with a facility of this caliber like Vado is.”

It’s often times very easy for a driver to take a liking to the tracks they’re more successful on, but Dillard agreed Vado is just an all-around great place to come race. Largely due to its popular size, shape and banking configuration.

“The way they’ve got the banking done, it’s flat around the bottom and then the progressive banking makes it more racy,” Dillard said.

Overall, it was another successful weekend at the track for the first-year Outlaw. Much like some of the other drivers planning to make the post-New Year’s trip to kick off the 2020 racing season, Dillard will make his debut at The Dirt Track at Charlotte for the Can-Am World Finals next weekend to wrap up the 2019 World of Outlaws season. But Modifieds are where he came from, and it’s good to see he’s still got it.

“To be able to hop in [the Modified] a couple times a year and still be competitive every time makes it nice, and also says a lot about the caliber of cars that MB Customs builds,” Dillard said. “I feel like a lot of the things I’ve learned with the Late Model has really helped my Modified program as well.”

Tickets for the inaugural Battle at the Border at Vado Speedway Park, Jan. 2-5, 2020 are on sale now. Click here for more information.