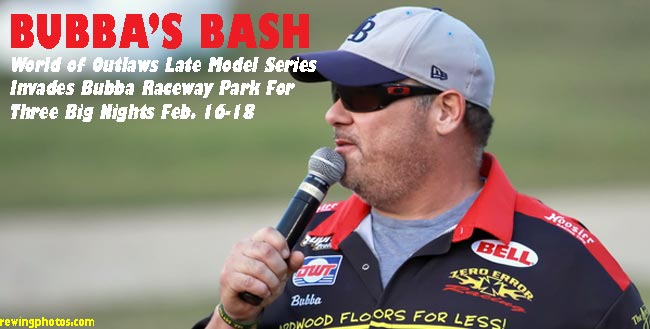 OCALA, FL – Feb. 13, 2012 – The World of Outlaws Late Model Series has stopped at Bubba Raceway Park before – once in each of the last two years, in fact.

But that doesn’t mean the stars of the nation’s premier dirt Late Model tour will be totally familiar with the central Florida facility when they invade Feb. 16-18 for the inaugural Bubba Army Late Model Winter Nationals.

The three-eighths-mile track now has a new name (it was called Ocala Speedway when the WoO LMS visited), a new look (wider surface and steeper banking) and, perhaps most notably, a unique, revitalized atmosphere under the ownership of nationally-syndicated radio show host Bubba ‘The Love Sponge’ Clem.

A life-long dirt-track racing enthusiast, Clem, 45, has brought an unmistakable edge to the action at BRP since purchasing the property with agent Tom Bean in the spring of 2011. From his attention-grabbing promotions (like free admission to ladies 18-and-over who come to the track wearing Daisy Duke shorts and cowboy boots) to his unabashed championing of BRP in public, in the press and on his daily radio show, he’s made it clear that this is not the same old Ocala Speedway.

Coming off a successful debut season at the helm of the track, Clem is ready to take BRP to new heights with three consecutive nights of WoO LMS action. The tripleheader will not only mark just the second time that one track presents three full WoO LMS programs paying progressively larger purses (BRP’s schedule goes 40 laps/$8,000 to win on Thurs., Feb. 16; 50 laps/$10,000 on Fri., Feb. 17; and 60 laps/$12,000 on Sat., Feb. 18), it will rank as the richest three-race stretch in the long history of the Ocala speedplant.

There’s no doubt that Clem is pumped up for the highest-profile event of his short tenure at BRP. He already called the WoO LMS “the UFC of dirt-track racing” after announcing in December that the tour would sanction his Late Model Winter Nationals, and he’s continued upping the ante as the big meet approaches.

On Sunday, Clem set the stage for this week’s spectacular with a simple message on his Twitter feed: “yea the real studs coming 2 town. The woo dirt late models.”

All entrants will face the challenge of taming an egg-shaped bullring that had proved difficult to master even before it was tweaked as part of Clem’s $300,000-plus renovation project. Clem, who on most afternoons can be found working on the BRP surface in a water truck or grader, figures that more racing room (the speedway’s width has been increased 20 to 30 feet) and banking (the pitch of the corners has more than doubled to 18 degrees) should enhance the competition and certainly jeopardize the one-lap Super Late Model track record (14.873 seconds by Austin Hubbard of Seaford, Del., on March 25, 2011).

“I think the average racer has heard a little bit of a buzz about Bubba Raceway Park,” said Clem, who grew up in Warsaw, Ind., and attended many dirt tracks as a youngster. “And hopefully people up north will come down, check us out and have a good experience.”

MAN TO BEAT: As if Darrell Lanigan’s convincing triumph in the 2012 WoO LMS season opener on Saturday night at Screven Motor Speedway in Sylvania, Ga., didn’t install him as a favorite to reach Victory Lane in the Bubba Army Late Model Winter Nationals, there’s also this: he’s undefeated in World of Outlaws action at BRP.

Lanigan, 41, of Union, Ky., won both the 2010 and 2011 WoO LMS stops at BRP after grabbing the lead early in each A-Main. He fought off several challenges in the ’10 event and outran Josh Richards of Shinnston, W.Va., to the checkered flag in ’11.

ON THE DOORSTEP: Richards has raced at BRP three times in his career and has been in contention for victory in each A-Main, but he’s settled for finishes of fourth (WoO LMS ’10), fifth (DIRTcar UMP-sanctioned event in ’11) and second (WoO LMS ’11).

The 23-year-old sensation will look to finish the job in the Winter Nationals, during which he can become the alltime winningest driver on the WoO LMS. His 37 career victories already top the tour’s win list since 2004, but he enters the tripleheader tied with Billy Moyer of Batesville, Ark., for top-winner status when the original 1988-89 WoO LMS seasons are included.

GOING FOR TWO: Rick Eckert of York, Pa., kicked off his WoO LMS title defense with an impressive outing at Screven, charging forward from the 12th starting spot to finish third. It was his best ever at the Peach State track, where he had a top finish of fifth in three previous starts.

That would seem to bode well for Eckert’s chances at BRP. His best performance in three career appearances is a sixth in last year’s WoO LMS A-Main.

So the 37-year-old would love to meet Clem in Victory Lane at BRP, a track he’s raced at twice in WoO LMS action with finishes of second (’10) and 10th (11th). He enters the weekend after driving his Warrior Chassis mount to a sixth-place finish in the ’12 lidlifter at Screven.

HARD HIT: McCreadie’s Sweeteners Plus teammate, Vic Coffey of Caledonia, N.Y., saw his 2012 WoO LMS campaign start in rough fashion when he slammed Screven’s turn-one wall during hot laps on Friday night. The contact was so heavy that it twisted the rear clip of Coffey’s car and bent a rib brace on his seat.

Coffey escaped the accident with only some residual soreness. He ultimately had to use an emergency provisional to start the A-Main in his backup car – thus forfeiting the race’s $1,500 start money – but salvaged a 12th-place finish.

The 2008 WoO LMS Rookie of the Year’s crashed car was stripped down in the Screven pit area and won’t be serviceable for the remainder of his trip south. But Coffey will have a second car at his disposal because he arranged for another machine to be transported to him from the team’s Avon, N.Y., shop in time for the events at BRP.

Coffey’s two career starts at BRP include an 11th-place finish in the 2011 WoO LMS event and a DNQ for last year’s DIRTcar UMP program.

STRONG CLASS: The record eight-driver WoO LMS rookie crop made noise in the opener at Screven.

McCool, Sheppard and Sullivan are the lone rookies with previous experience at BRP, all in last year’s DIRTcar UMP event. McCool finished seventh and Sheppard was 12th in the 50-lap A-Main, while Sullivan failed to qualify.

DEFENDING THEIR TURF: BRP’s local contingent is expected to be headed by Ivedent Lloyd Jr., a hometown Ocala star who pocketed $7,500 for winning the 2011 Late Model track title.

Lloyd has performed admirably against the Outlaws at BRP, finishing eighth in both the 2010 and ’11 A-Mains. He was especially strong in 2010, setting fast time and leading laps 1-2 of the feature before fading.

Tyler Ivey of Tallahassee, Fla., who finished seventh in the 2010 WoO LMS A-Main at BRP, and Christian Augspurger of Palm Beach Gardens, Fla., are among the other Sunshine State drivers to watch.

HULKAMANIA: Professional Wrestling legend Hulk Hogan – a close friend of Clem’s – is scheduled to serve as the Grand Marshall of Saturday night’s Winter Nationals finale at BRP. He will wave the green flag to start the 60-lap A-Main.

Clem said he will also have a “Hulk Hogan-themed surprise” for all 24 starters in Saturday evening’s headliner.

PREP TIME: On-track action will begin on Wed., Feb. 15, with an open practice session beginning at 6 p.m. Pit admission is $12.

SKED: On each day of the Winter Nationals, pit gates are scheduled to open at 3 p.m. and grandstand gates at 4 p.m. Practice set to get the green flag at 6 p.m. with time trials to follow, and heat racing is slated for a 7 p.m. green flag.

The Florida Mini-Sprint Association will race on the undercard each evening.

INFO: More information on the Bubba Army Late Model Winter Nationals is available by logging on to www.bubbaracewaypark.com or calling 352-622-9400.