TWO-FER: Overton Wins at 411 and Takes Back-To-Back Features Vs. Outlaws 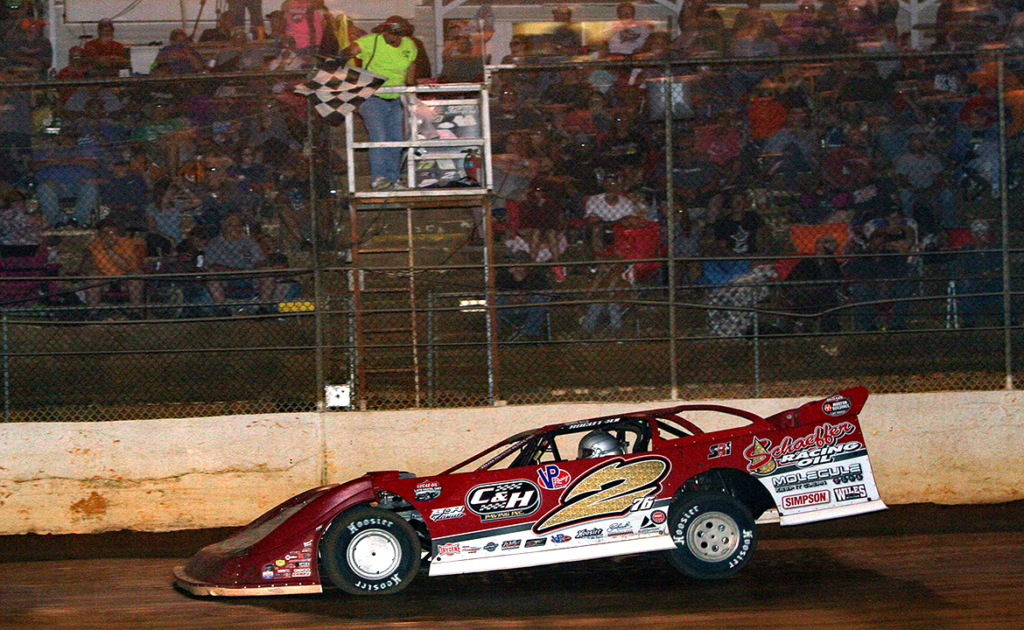 SEYMOUR, TN – Rum Runner Racing team owner Joey Coulter was quoted in a World of Outlaws press release last week, commenting “At this point, that place owes him a win.” “That place” was 411 Motor Speedway and that “him” is none other than Coulter’s driver aboard the Schaeffer’s Racing Oil #2, Brandon Overton. On Saturday night, Overton got that win at that very track, making it two World of Outlaws Morton Buildings Late Model Series Feature wins on back-to-back nights for the Evans, GA-driver.

Just like his win at Cherokee Speedway on Friday night, “Big Sexy” found a bit of good fortune on his trip to Victory Lane at 411. Loudon, TN-pilot Cory Hedgecock won in last year’s visit and looked to have the first few stages of the race covered until misfortune struck on lap 17. Steam began to spew out of Hedgecock’s hood in the exit of turn two, forcing the Loudon, TN-native to shut it down on the backstretch and pull into the infield, dashing his chances to repeat as a World of Outlaws Feature winner at 411.

Overton inherited the lead into turn three before the caution came out and restacked the field, putting the likes of Darrell Lanigan and a hungry Rookie of the Year candidate Cade Dillard right on his rear bumper. But as a former World of Outlaws Rookie of the Year winner himself, Overton was simply not going to crack under the pressure. He sustained that lead the rest of the way, leading the final 34 laps en route to his fourth Morton Buildings Feature win of the season and seventh of his career.

Back in May, Overton was passed late for the lead in regional competition at 411 and ran second again in another regional Feature in July. Those two runners-up stuck with him the whole season, pushing him just a bit more to get that redemption win on a national stage. Now, the weight’s been lifted off his shoulders.

“I ran second to Dale [McDowell] and I ran second to [Jimmy] Owens,” Overton said. “I never led in the one Dale won, but the one Owens got me, he passed me with about 10-to-go. So, this definitely feels good.”

Once he grabbed the lead for good, Overton battled through multiple restarts in the circuits remaining, riding the top line around the 3/8-mile. He and crew chief Harold Holly have been to 411 and several other Southeastern tracks throughout the years, so they’ve got the Midas touch when it comes to all the tips and tricks to getting around such places, and that was on full display on Saturday night.

“I think what helped us more than anything is coming here a lot,” Overton said. “We’ve ran a bunch of races here throughout the year. So, just to get a jump on these guys before they get here, it definitely helps.”

“I’ve never been here with the racetrack like it was tonight,” he continued. “I had a feeling it was going to just clean off and get slick from top to bottom like it usually does, and it didn’t, so I had to change my line up a bit getting into turn three because I kept pushing.”

Darrell Lanigan had another solid night, running inside the top three all race long to claim the runner-up spot. After riding back in the fifth spot in overall Series points for much of the summer and going on a big top-five-less streak, Lanigan and team DLR have really turned their season around in the past few weeks, even busting the World of Outlaws winless slump of over four years back in September.

Now making it two consecutive top-five finishes for “The Bluegrass Bandit,” Lanigan sits just eight points behind Chase Junghans in his bid to finish second by the conclusion of the Can-Am World Finals next month.

“At the beginning of the year, we were second. But then we had some DNFs, and you just can’t have DNFs on this tour. If we could take them back, we’d be right up there in second. But it is what it is, we’re fighting back,” Lanigan said.

It’s surprisingly been a few races since Brandon Sheppard was last on the World of Outlaws podium, but what a drive he made to get the last spot on it on Saturday night. After an uncharacteristically slow time in Qualifying that left him 15th overall, “The Rocket Shepp” finished fourth in his Drydene Heat Race and began his charge to the front in the Feature from 11th.

Gradually picking off an average of one car every six laps, the Rocket1 Racing pilot drove the wheels off of his Rocket Chassis #1 on the low side, looking for every advantage to try and catch the leaders once he reached third.

“Truthfully, I just needed to start out front,” Sheppard said. “Clean air was big, because once we got spread out, you kind of had to get in line. Off the restarts, you could pass a few cars, and that’s where I did it because I was really good on the restarts.”

At one point, Sheppard was giving Lanigan all he could handle in his bid for second, but eventually fell off a bit once Lanigan’s #29 came in on the top side. Sheppard even tried switching lanes up to the high-banked top groove to catch Overton and Lanigan, but nothing came of it.

Hard-charging efforts in the Morton Buildings Feature normally come courtesy of the assistance of a grade-A team behind the fence, setting up their car just right to make head-turning runs like these. And that’s exactly what Sheppard had in his corner at 411.

“It’s all about my team,” Sheppard said. “They didn’t give up on me, they kept digging, and I got the shovel out to dig ourselves out of a hole.”

It’s time to crown a new champion! The Can-Am World Finals at The Dirt Track at Charlotte kicks off on Thursday, Nov. 7 with Qualifying events that will set the field for Friday and Saturday’s events. Two 50-lap, $12,000-to-win Morton Buildings Features headline Friday (Nov. 8) and Saturday (Nov. 9) night, where the championship celebrations will begin alongside the World of Outlaws NOS Energy Drink Sprint Cars and the Super DIRTcar Series!

And now, just recently announced, all DIRTVision Fast Pass subscribers will be able to watch the Can-Am World Finals at no extra charge! Subscribe today at DIRTVision.com and watch us cap off a spectacular season of racing!