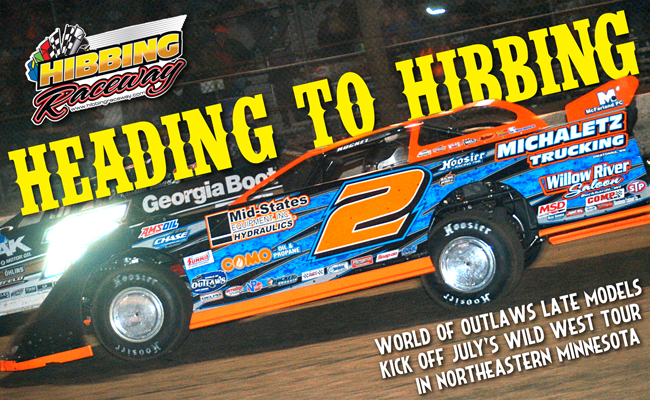 HIBBING, Minn. –July 7, 2014 – In February, Brady Smith launched his race season with a stellar showing in World of Outlaws Late Model Series events more than 1,500 miles from his Solon Springs, Wis., home. With the WoO LMS set to invade the Upper Midwest for its annual Wild West Tour July 10-18, Smith is aiming to find even more success as he returns to the national tour on familiar ground.

“It’s always nice to race closer to home,” said Smith, 37, who notched a victory and two more top-three finishes in five WoO LMS races when the series opened its season with a stretch of Florida Speedweeks events at Bubba Raceway Park in Ocala, Fla., and Volusia Speedway Park in Barberville, Fla. “These Wild West Tour races aren’t all right in my backyard, but they’re definitely a lot closer than some of the places we’ve traveled before to race with the Outlaws. That’s why I’ve always enjoyed doing the Wild West Tour, getting the Outlaws guys at some of the tracks up here.”

Smith, a frequent interloper on the WoO LMS and a former series regular, will begin his extended return to the series in the Wild West Tour opener Thursday (July 10) at Hibbing Raceway in Hibbing, Minn. From Hibbing, Smith will follow the series to Deer Creek Speedway (July 12) in Spring Valley, Minn., Brown County Speedway (July 15) in Aberdeen, S.D., and River Cities Speedway (July 18) in Grand Forks, N.D.

With significant experience at three of the four ovals that make up this year’s four-race Wild West Tour, Smith hopes to make the most of the slight advantage he’ll have over the traveling stars of the WoO LMS who have limited experience at those tracks.

Smith will enjoy perhaps the biggest leg up on the WoO LMS regulars at Thursday’s Wild West Tour opener at Hibbing Raceway. Located roughly two hours from his home, the 3/8-mile clay oval has produced at least one victory for Smith in each of the past three seasons in spec-engine Late Model action. Meanwhile, the majority of the WoO LMS regulars will make their first ever appearance at Hibbing as the track hosts its inaugural WoO LMS event.

“I’ve definitely got more laps (at Hibbing) than any of the other racetracks we’re gonna hit (on the Wild West Tour),” said Smith, who will compete at Hibbing for the first time since switching to a Rocket Chassis over the offseason. “We’ve been pretty successful there with our other cars. We’ve got new Rocket cars, which I’ve never been there with. But still, I feel like I know the racetrack pretty well.”

Along with his familiarity with most of this year’s Wild West Tour venues, Smith is also well acquainted with the stout competition of the WoO LMS. He competed full time with the series in 2009, placing eighth in the final standings with 19 top-10 finishes in 39 series starts. While logistics have kept him from any further full-time runs on the tour, Smith has been one of the most frequent non-regulars on the tour with an average of 18 series WoO LMS events entered each season over the past four years.

Smith is no stranger to success on the WoO LMS either. His five A-Main victories ranks 17th on the all-time wins list in the tour’s modern era and he has two victories in Wild West Tour action – both coming in 2008 at River Cities and Estevan Motor Speedway in Estevan, Sask.

Smith once again proved his mettle on the WoO LMS with his fantastic Speedweeks performance earlier this season. He briefly considered another full-time series run after leaving Speedweeks ranked third in the championship chase, but ultimately decided his self-owned team wasn’t prepared to commit to the entire tour.

“We definitely gave it serious consideration and came really close to giving it a try,” said Smith, whose team consists of only himself and his uncle Rick Smith. “It just really wasn’t an option with the lack of crew help. To compete for a title, it comes down to your help. Right now, it’s just me and my uncle Rick. Not to take anything away from him, but we just don’t have a top caliber team with tons of help. That makes a big difference.

“As a driver, I feel very capable behind the steering wheel, and I like to think I can run with anyone. I would definitely love to be able to run the whole year with the Outlaws again; I’m just not gonna do it unless I feel like I can do it right with everything in order.”

With his opportunities to compete on the WoO LMS limited, Smith knows he has to make the most of the chances he gets to enter series events. He’s prepared to do just that on the Wild West Tour after picking up momentum with a string of strong runs in June.

With his performance cooling off a bit following February’s Speedweeks success, Smith has used select appearances on the UMP DIRTcar Summer Nationals ­— a sister tour to the WoO LMS that travels throughout the Midwest during June and July — to get back into form. In four Summer Nationals starts in June, Smith notched three-top five finishes including a victory in his most recent race June 29 at Lincoln Speedway in Lincoln, Ill.

“We definitely feel like we’re making progress with the car,” said Smith. “We had a phenomenal Florida trip, but we had a little bit of a learning curve when we got back racing closer to home. I definitely feel like with the Summer Nationals races, we kind of hit on something. We’re on the same tires for all these upcoming races, so we’re definitely excited to be back on the right track.

“It’s real gratifying just to be able to run well with the Outlaws, but we’re going to these races to try and win. We’ve proven that we can win; it’s just a matter of getting some things to go our way. I think it’s very possible.”

Smith will face off against a star-studded roster of WoO LMS drivers led by two-time series champion and current points leader Darrell Lanigan of Union, Ky. Lanigan enters Hibbing’s event on July 11 riding the momentum of a series-leading seven WoO LMS A-Main victories this season highlighted by a breakthrough triumph at the $30,000-to-win Firecracker 100 by GottaRace.com on June 28 at Lernerville Speedway in Sarver, Pa.

Tickets for the WoO LMS debut at Hibbing Raceway on Thursday, July 10 are available for purchase online at www.WorldofOutlaws.com/tickets. Advance tickets are $28 for adults, increasing to $30 on the day of the race. Children 6-12 are only $15.

For more information on the World of Outlaws Late Model Series, visit www.WorldofOutlaws.com. For more on Hibbing Raceway, visit www.HibbingRaceway.com.