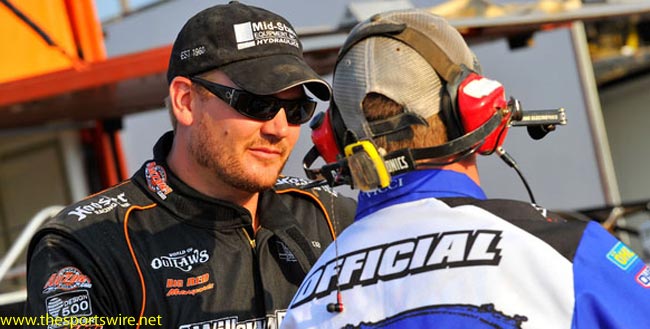 But the Solon Springs, Wis., driver is ready to end his absence from competition this Friday night (April 29) – at a track where he’s undefeated, no less.

Smith, 33, has his focus set squarely on Friday evening’s ‘Cabin Fever 50’ at Hartford Motor Speedway, a sprawling half-mile oval that will host its first-ever WoO LMS event. The $10,000-to-win A-Main returns the national tour to Michigan for the first time since 2007 and Smith to a facility at which he was victorious in his only previous appearance.

It was almost exactly eight months ago that Smith made a memorable trip to Hartford. On Aug. 27, 2010, he stormed forward from the 19th starting spot to capture the track’s ‘Lane 46,’ a marquee event on the DIRTcar UMP-sanctioned American Late Model Series.

“We’re definitely looking forward to going back there,” Smith said of Hartford, which is located in the Southwestern corner of the Wolverine State less than 15 miles from the Lake Michigan shoreline. “We feel it should be a race where we can contend for the win if things go right.”

Smith has every right to be bullish about his chances after debuting so splendidly at Hartford last year. A broken drive flange during a heat race forced him to qualify through a consolation, but he responded positively by marching through the feature field to take the lead for good just before the halfway point.

“We caught some breaks and missed a couple wrecks, but we also had an exceptional car,” remembered Smith, whose earnings for his 46-lap triumph totaled $5,700 (including lap money). “I had never even seen the place, but our car really worked well there. Scott (Bloomquist, Smith’s chassis builder) had raced there before so he had us dialed in pretty good right when we unloaded.

“I really liked the track,” he added. “It was big and fast for sure, but unlike a lot of big, fast racetracks, it seemed like you could race on it. You could move around pretty well.”

Last year’s ‘Lane 46’ was the richest dirt Late Model event at Hartford since Jim Borden purchased the track in 2008 and the field was dripping with quality racers, including Michigan standouts such as six-time Hartford champion Alan Vochaska of South Haven, Borden’s son-in-law J.R. Hotovy of Covert, ALMS titlist Brian Ruhlman of Clarklake, Curtis Roberts of Coleman and Jeep VanWormer of Pinconning. But Smith will run for much more cash and face off with even more talent this Friday night, with WoO LMS champions Josh Richards of Shinnston, W.Va., Darrell Lanigan of Union, Ky., and Tim McCreadie of Watertown, N.Y., leading the charge of circuit stars who will battle the home state contingent.

A WoO LMS regular in 2009 and the first half of the 2010 season, Smith knows what it takes to run with the country’s best drivers. He owns three career wins on the tour and nearly added to that total in February during the DIRTcar Nationals by UNOH at Volusia Speedway Park in Barberville, Fla., where he finished second to Bloomquist in each of the two WoO LMS events that were contested.

“We did really well at Volusia,” said Smith, who also had a third-place finish in one of the four DIRTcar UMP Late Model features that were part of the DIRTcar Nationals. “I wish we could’ve won one, but we were right there so it was a great way to start the year. I just hope we can pick up where we left off when we get (to Hartford).”

It might seem like an eternity since Smith last had his Big Red Motorsports Team Zero by Bloomquist car on the track, but he certainly hasn’t been sitting still over the past two months. In addition to regrouping his race team in the wake of his longtime crewman leaving the fold after the Florida excursion, Smith spent much of his hiatus working on a new venture: building UMP/IMCA/WISSOTA-type Modified chassis in a collaborative effort with Jimmy Owens, a two-time World 100 winner and four-time UMP Modified national titlist. Smith and Owens have Bloomquist’s chassis guy weld together Modified frames and then they finish assembling the machines in their respective shops.

“I needed to come up with something to try and generate some income when we’re not racing,” said Smith, who calls his open-wheel cars ‘LG2 Modifieds.’ “I’ve never run a Modified, but I know Jimmy had built Modifieds in the past and after we started talking one thing led to another and this all kind of came together.

“We’re starting small. We’re just taking on a few customers right now (Minnesota’s Darrell Nelson will run the first LG2 Modified) and trying to get them running good, and then maybe later in the summer we’ll start taking orders for more cars. We’ll see how it goes.”

In connection with his Modified endeavor, Smith has also been busy moving into a new shop. He recently purchased a former machine shop on five acres of land about two minutes from his residence, allowing him to shift his racing effort out of the cramped garage at his home. An expansion of his new shop will provide plenty of room for his dirt Late Models as well as the Modified assembly.

“We’ve had a lot of stuff going on with the new shop,” said Smith, who finished eighth in the 2009 WoO LMS points standings but dropped off the tour in June 2010 after struggling with his performance and the rigors of travel from his northern Wisconsin home. “We had to get a logger in there to make room for a driveway to get our hauler in. We had to take bids (from pavers) to do the driveway. We had to move equipment over from the old building.

“It’s not that our racing has taken a backseat lately, but it hasn’t been our only focus. This year’s gonna be a little bit of a transition for us as we take this new deal slow and try not to get too far ahead of ourselves.”

Smith is certainly ready to get back behind the wheel. He’ll actually double his pleasure this weekend; after making the nine-hour-plus haul to Hartford from his Dairyland base, he’ll join the WoO LMS caravan and compete in the ‘My Old Kentucky Home Shootout’ on Saturday night (April 30) at Bluegrass Speedway in Bardstown, Ky. Smith was strong in his first-ever appearances at Bluegrass last year, running in the top five in May’s WoO LMS A-Main until slapping the wall while trying to avoid Lanigan’s out-of-shape car and finishing fifth in a return trip there later in the season.

Reserved seats in the top-five rows of Hartford Motor Speedway’s spacious grandstand are available for the ‘Cabin Fever 50’ on Fri., April 29, by calling 269-764-0514.

Tickets on race day are $25, with kids 10-and-under admitted free of charge. Pit passes will be $35.

Pit gates are scheduled to open at 3 p.m. and spectator gates at 6 p.m. for Friday’s program, which will kick off the 2011 season at Hartford and also include racing for the DIRTcar UMP Modified division. Racing is set to begin at 8 p.m.

Info on Hartford Motor Speedway can be obtained by logging on to www.hartfordmotorspeedway.net.