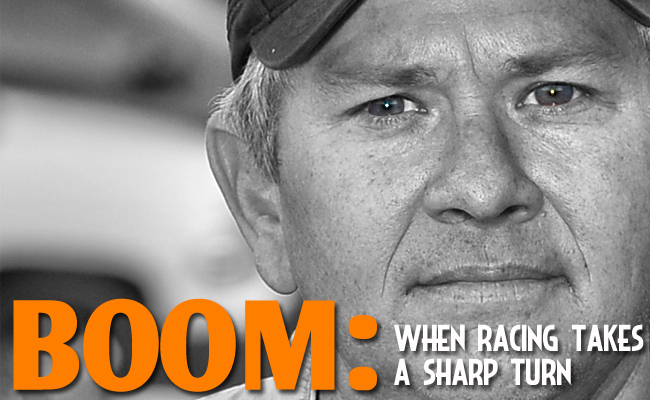 Concord, N.C. – May 12, 2016 – You can personify a late model by its relationship with the driver – the car’s pistons keep thrusting as long as a driver’s heart for the sport keeps pumping. It’s an in-sync connection you will find in the World of Outlaws Craftsman® Late Model Series, where these dirt devils know every little quirk about their racing machines – the two wed together as if it were a long term relationship.

The true test in racing remains to be the devastation, the crashes. Boom Briggs’ time with his car was cut short at Farmer City Raceway – just six races into the season – and in that moment fans feared the worst. The end of the No. 99B Briggs Transport/ Corry Rubber Corp. Longhorn did do them part as the saying goes, but Briggs’ fighting spirit has kept him going since.

In a Saturday night shootout in Farmer City, Ill., Briggs accelerated off turn one – the backstretch of the quarter-mile oval is open, with tire barriers enclosing only the ends of the straightaway. Briggs’ machine seated itself into the top groove. Briggs swiftly skated up the track, on a route to disaster.

Briggs paused for a moment to replay the crash in his mind and then began to narrate the vivid memory.

“I just got hung up on the back straightaway,” he said. “I actually tightened my car up, and I was trying to get all I could off turn two. The car got too tight on me and I knew that tire was coming. I just tried to get the car turned and it didn’t want to turn.”

The car’s rear-end folded over to the cockpit, where Briggs said he knew it was bad because his “butt was right on the racetrack” when the dust settled. Though, he will say – contrary to the fans that covered their eyes from the aftermath – the crash did not hurt.

The chassis absorbed the blow, bent every-which-way. But the cockpit was still intact, and Briggs said during the crash he didn’t move. He owes it all to the advanced restraint system within the vehicle. Briggs walked from turn three on his own will, clinching his right arm.

“Did I feel it? Absolutely,” he said. “I’m telling you though, I didn’t even have a black and blue mark on my body, never had a headache – nothing. [What broke my arm] was when the front end swung around and the right front tire got into the cement wall. It jerked the wheel.”

Nearly five weeks later: three surgeries, two metal plates and two connecting wires. Briggs shattered the radial bone between his thumb and elbow. He laughed. Normally when a person breaks their arm, “they get it set, get a cast for four weeks then go about their life.” For him, it meant reconstructing his arm and 12 weeks estimated recovery.

Two of the three surgeries reconstructed his arm within – including one metal plate at his wrist and another forearm plate that will be there for the rest of his life. The third surgery was on the exterior, a skin graft to add the finishing touch.

Though this is progress to the doctors – and arguably everyone else around him – Briggs does not like to wait. His father taught him at a young age to, “get up and go to work.” Briggs not only races his late model, but also owns Briggs Transport, a transportation and mulching company. For his sanity, he needed to keep working. But, the cast restricted him during Pennsylvania’s prime-season for mulching.

Cousin and fulltime Outlaws driver Chub Frank has seen the struggle first-hand; the two live and work less than a half-mile away in Bear Lake, Penn.

“He’s been ornery,” Frank said. “But this week he’s been a lot better because he got his elbow unlocked and he can actually work. He did a little modification to his cast so he can run the loader now.”

It took Briggs cutting down his cast – Frank said he did just “a little grinding” – to free up his hand to run the joystick to the loader. Even through his last surgery, Briggs got home at 1 p.m. only to go load mulch until 7 p.m. Both Briggs and Frank know the doctors may not like it, but to their point it is total therapy.

“I hope running this loader right now is like therapy,” said Briggs, who went from having no hand strength to being able to grip objects. “Anybody who knows me, I’m wide-open all the time. I’ve been through a lot but I just don’t quit.”

The next surgery, scheduled for May 16, is to remove the wires holding together the plates in his arm. But, he really did not say much about how excited he is to get them out. Rather, he is looking ahead to another timeline.

Briggs figured it this way: May 16’s surgery offers a little more than one month to prepare for Weedsport Speedway on Tuesday, June 21. That’s his goal, but Briggs said he will only come back if he is “100-percent healthy and 100-percent competitive.”

“I look at this deal as one that is hopefully going to make me better,” Briggs said. “I’ve been dealt bad hands of cards over the years with different scenarios and I try to make a positive out of it. I’m hoping the time off gives me a new appreciation for racing. When I come back, I’m going to try and be more focused.”

Not to forget, Briggs yearns for that connection between him and his car; this time, with a new one. Frank built his cousin a new car to renew his season. As for the fans around the nation who thought the car was unsalvageable: Frank resurrected it and it has been scheduled to compete in local races the past few weeks. It just took a little elbow grease – jigging, clipping and reconnecting much like Briggs’ arm.

“Let me tell you something,” said Briggs, his voice stern. “Chub Frank is more talented than people give him credit for. There is nothing he can’t do.”

So, by the numbers: five weeks, three surgeries, two plates, two wires, one cut-down cast, two race-able cars and 75 missed text messages. It all equates to one determined Outlaw trying to make one heck of a comeback.

“It was amazing a couple days after that deal,” said Briggs, who had 75 unread text messages and plenty more notifications on social media. “I try to treat people the way they want to be treated, and the outpour I’ve got back…it just makes me want to do this that much more. No one needs to worry. I’ll be back better than ever.”

While Briggs is on the mend, the World of Outlaws will travel to Moler Raceway Park (Ohio) Friday, May 27, and then to Tyler County Speedway (W.V.) for a two-night showing of the Jackpot 100 on Saturday, May 28 and Sunday, May 29.