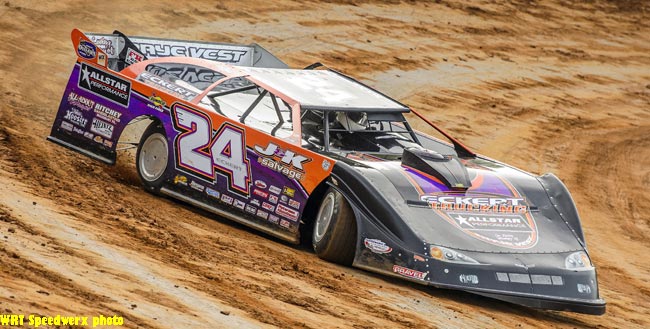 Because make no mistake – Eckert, 46, of York, Pa., could use a major pick-me-up in the wake of arguably the most nightmarish two-week stretch of his distinguished racing career.

“We need a lot of positive stuff to happen,” bottom-lined the defending WoO LMS champion, who won the last national touring-series event held at Black Hills Speedway (Hav-A-Tampa/UDTRA series on May 16, 2003). “We need to make some money to help pay for the stuff we’ve torn up and what we’ve broke the last couple weeks.”

Indeed, Eckert went through a meat grinder during the June 22-30 WoO LMS swing through Canada, New York and Pennsylvania that preceded the ‘Wild West Tour,’ which began on Saturday night at Deer Creek Speedway in Spring Valley, Minn., and continues with the circuit’s first modern-era (2004-present) stop at Black Hills on Tuesday evening. He not only experienced major mechanical trouble with the Freightliner hauler he uses to transport his racing equipment, but also broke three engines in a two-race span.

Eckert’s problems began during the WoO LMS event on June 22 at Quebec’s Autodrome Granby when his primary motor broke during time trials. He used his backup car – equipped with a powerplant borrowed from California dirt Late Model racer Eric Jacobsen – to score a 10th-place finish in the 50-lap A-Main.

Then things went from bad to worse for Eckert. His hauler’s transmission began malfunctioning during his trip to the next scheduled WoO LMS event, on June 24 at Cornwall (Ont.) Motor Speedway, and he limped into a truck stop just a couple miles from the Canadian track early on the morning of June 23.

The next week became a headache-inducing logistical nightmare for Eckert, who didn’t get his rig back in full operating order – from a Freightliner dealership in Syracuse, N.Y., where it sat for nearly a week after initial repairs at a Cornwall dealer didn’t work – until July 1. He had to arrange alternate transportation to get his trailer to WoO LMS races at Cornwall (fellow WoO LMS traveler Jack Sullivan used his truck to pull the trailer to the event that was ultimately rained out), Canandaigua (N.Y.) Motorsports Park on June 26 (a borrowed semi-truck from Tracey Road Equipment) and the Firecracker 100 at Lernerville Speedway in Sarver, Pa., on June 28-30 (Eckert’s father, Junior, who drove up to Syracuse on June 27 with his own Renegade toterhome), and he hitched a ride back to Syracuse after the Firecracker 100 with WoO LMS regular Tim Fuller in order to finally pick up his orange truck.

Adding insult to injury, Eckert broke two more engines at Canandaigua – the piece he borrowed from Jacobsen went south at the start of a heat race, and he broke a valve spring in his own powerplant that was in the backup car he drove to a ninth-place finish in Canandaigua’s A-Main. In the midst of all his travel problems, Eckert found himself out of useable motors and seemingly resigned to dropping off the WoO LMS for the first time since the circuit was launched in 2004 under the World Racing Group banner.

But Jacobsen, who became acquainted with Eckert when he ran the WoO LMS during the 2005 and ’06 seasons, became Eckert’s savior.

“I called Eric (on June 27) to tell him I hurt his motor and that I’d take care of it,” said Eckert, whose bill for repairs to his truck totaled nearly $5,400. “Then he said, ‘So what do you have for motors now?’ I told him, ‘Nothing,’ and he said, ‘I have two motors at my shop (in Tennessee).’ I told him, ‘I don’t think you’re understanding this conversation – I can’t afford to fix the motors I hurt now, so I sure can’t borrow anymore and risk having to pay to fix more of them.’ Then he said, “I have two motors here that are paid for and I’m sending them up to you (at Lernerville).’ He told me that he just wants me to use them to keep racing, so I can’t thank him enough.”

Eckert’s car builder, Scott Bloomquist, brought one of Jacobsen’s motors to Lernerville and Tyler Reddick’s team, which was working at Bloomquist’s shop in Tennessee (where Jacobsen has a shop), transported the other powerplant. Eckert installed the motors in his cars for the Firecracker 100 weekend and is still using them on this week’s ‘Wild West Tour.’

“I told him, ‘I don’t really want to do this – I mean, how many signs does a guy need that he needs to quit? The truck broke, we broke three motors in two races – I mean, everything’s falling apart.’ But he told me to keep going, and even though I still don’t know if it’s the right decision, here we are.

“There’s always stuff to surprise you in racing,” he continued. “You just hope it’s not the bad surprises like we’ve been through. I guarantee this whole deal took a couple years off my life, because it was grueling. It felt like it was a month, but it was only a couple weeks.”

Eckert, who now also has one of his own motors back (WoO LMS rookie Bub McCool’s father transported it from Jay Dickens’s shop in Mississippi to Lernerville last Saturday), was able to right his team’s listing ship with a solid fifth-place finish in Saturday night’s WoO LMS ‘NAPA Auto Parts Gopher 50’ at Deer Creek. Now he turns his attention to Black Hills, a facility that last hosted the WoO LMS on June 5, 1988, during the inaugural season of its initial two-year run under the auspices of late WoO Sprint Car Series founder Ted Johnson.

Of course, Eckert and his WoO LMS cohorts won’t compete on the same Black Hills Speedway that he mastered to reach Victory Lane in the 2003 Hav-A-Tampa/UDTRA series event. That race was run on the track’s old three-eighths -mile oval; a sprawling, blazing-fast half-mile layout has been the speedway’s featured attraction since 2009.

“I remember when we ran there (in ’03) that there was an outside track all growed over with weeds,” said Eckert. “You could see the shape. It’s one big place, but I like big tracks. I usually run better on big tracks actually.”

Eckert enters the $10,000-to-win ‘Black Hills 50’ still holding second place in the points standings, but he’s a hefty 156 points behind Darrell Lanigan of Union, Ky., and has been struggling to match the torrid pace being set on the tour by Lanigan and Tim McCreadie of Watertown, N.Y. Lanigan and McCreadie have combined to win eight of the last 14 WoO LMS events.

“Them guys are a step ahead of everybody – and I think they’re two steps ahead of me,” said Eckert, whose lone WoO LMS win this season came on Feb. 18 at Bubba Raceway Park in Ocala, Fla. “We keep throwing different stuff at it trying to get to where we can run with them guys and I haven’t been able to come up with anything yet. Hopefully we hit on something here quick.”

Black Hills Speedway’s gates are scheduled to open at 4:30 MT on Tues., July 10. Hot laps are set to begin at 7 p.m. MT with time trials to follow.

General admission to Tuesday night’s program, which also includes the B-Modified division, is $30 for ages 16-and-over, $15 for kids 6-15 and free for children 5-and-under.