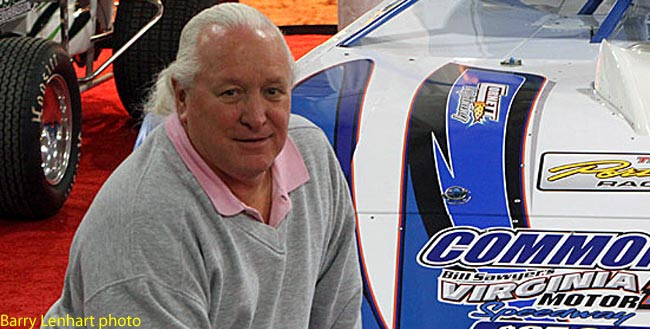 JAMAICA, VA – April 3, 2011 – There’s a host of reasons for Virginia Motor Speedway owner Bill Sawyer’s selection as the 2010 World of Outlaws Late Model Series Promoter of the Year, but three undoubtedly stand out.

No. 1: Sawyer’s racetrack, a showplace half-mile oval that he’s built into one of the top short-track facilities in the country.

No. 2: Sawyer’s creation of the Commonwealth 100, a $25,000-to-win WoO LMS spectacular that launched in 2010 and returns to the national tour’s schedule this year for a second annual edition on April 15-16.

No. 3: Sawyer’s dedication to the fans, for whom he not only provides a speedway with virtually unmatched amenities but also attractive ticket deals like the one he’s offering up for the high-profile Commonwealth 100 weekend.

Under Sawyer’s leadership, VMS and the Commonwealth 100 have quickly assumed prominent places on the dirt Late Model map – and the extra-distance WoO LMS show has become arguably the biggest financial bargain in the division for fans. A two-day general admission ticket to the Commonwealth 100 – which includes time trials and heat races on Fri., April 15, and B-Mains, the 30-lap ‘Rumble on the River’ Non-Qualifiers’ Race and the 100-lap A-Main on Sat., April 16 – costs just $30 for adults, $27 for senior citizens/military and $15 for students ages 7-17.

Sawyer had originally set an April 1 deadline for fans to take advantage of the $30/$27/$15 two-day ticket, but he decided to dispatch the price as an advance-sale incentive and simply hold it steady right up to Qualifying Night on April 15.

“As a way to help the fans out every little bit we can in these economic times, I just felt we needed to carry the special two-day pricing all the way to the gate on Friday, April 15,” Sawyer said last week. “I think our price-point for a two-day ticket has been well, well received. We’ve read and heard a lot of nice comments on it, and now we’re going to let everybody take advantage of it.

“I think it’s important that we look after the working man’s pocketbook to make it affordable for him to be able to come to Virginia Motor Speedway for our biggest show of the year. We want to put a very good ticket price out there and hopefully do the volume of numbers coming through the gate.”

Commonwealth 100 attendees will certainly get plenty of bang for their buck when they sit down in VMS’s comfortable 8,000-seat aluminum grandstand. This year’s event figures to be even bigger and better than the 2010 inaugural, which drew 56 cars and saw Chris Madden of Gray Court, S.C., triumph in dramatic fashion. Entertaining extras for the fans that proved popular a year ago will also be back to add to the excitement, including a pre-race driver autograph session under the bleachers on Saturday and a cannon-blasting, gun-popping appearance by a group of costumed Civil War reenactors who bring the area’s history to life both before and after the 100.

“Fan interest has been very good and all indications are that we’re going to have a great field of cars,” said Sawyer. “We’ll have the who’s who of dirt Late Model racing here, that’s for sure.”

Madden, who has won three times at VMS over the past two years, will return to defend his Commonwealth 100 title. He’ll face a star-studded roster of entrants, including former WoO LMS champions Josh Richards of Shinnston, W.Va., Darrell Lanigan of Union, Ky. (who led last year’s event until popping a tire with nine laps remaining), Tim McCreadie of Watertown, N.Y., Steve Francis of Ashland, Ky., and Scott Bloomquist of Mooresburg, Tenn.

The field will also feature WoO LMS regulars who are well-known to VMS fans – like Rick Eckert of York, Pa., and 2010 Rookie of the Year Austin Hubbard of Seaford, Del., a 19-year-old sensation whose career began at the track – as well as ’10 Commonwealth contenders Jimmy Owens of Newport, Tenn. (finished second), Jonathan Davenport of Blairsville, Ga. (third place), Earl Pearson Jr. of Jacksonville, Fla. (fast-timer), Brian Birkhofer of Muscatine, Iowa (was second when he developed a flat on lap 85), Jimmy Mars of Menomonie, Wis. (second when he got a flat on lap 91) and Jason Covert of York Haven, Pa. (fourth when he slowed with a flat on lap 98).

Sawyer, 62, was more than satisfied with last year’s debut of the Commonwealth 100 and expects nothing but brighter days in the future.

“I think we were overdue to do a major, crown-jewel-type deal here at Virginia Motor Speedway,” said Sawyer. “For the first time out of the box with a major two-day event I was very pleased. All I can see it do is continue to grow.

“Last year’s race was a memorable show even though we had a 35 mph wind blowing all day long that made (the track) dry out sooner than we thought it would. We had a good surface when the event started (on Saturday) and there were still multiple grooves throughout the race, but the changing track made it more of a tire management situation. Madden sort of laid back a little bit and didn’t wear that right-rear (tire) out, and they all started coming back to him.”

During the Commonwealth 100 weekend, WoO LMS officials will publicly recognize Sawyer in front of his home fans for winning the tour’s Promoter of the Year honor. He did not attend December’s WoO LMS awards banquet in Concord, N.C., because he was recovering from a medical procedure (VMS P.R. director/announcer Dave Seay accepted the award in Sawyer’s stead), so this will be the first time he’s photographed with a plaque that he considers a cherished piece of hardware in his office.

“To be picked out as the Promoter of the Year from a lot of established tracks that have been on the World of Outlaws schedule for years is quite an honor,” said Sawyer, who has hosted at least one WoO LMS event every season since 2005. “It’s always nice to be patted on the back by your peers, and it says a lot for the staff that (VMS general manager) Clarke (Sawyer, Bill’s nephew) has here and the dedication that the boys put into the facility and each event that we do.”

The top-promoter nod is another achievement in a long racing life for Sawyer, who has literally been involved in the sport since his birth. His late father, Paul, was one of NASCAR’s pioneers and owned Richmond International Raceway until selling it to the International Speedway Corporation in 1999.

“Daddy got his first car the year I was born,” said Sawyer. “This will be the 62nd year that the Sawyer family name has been involved in racing, starting back in 1949 when my father got his first Modified that happened to be a dirt car. He went from car owner to promoter to racetrack builder in Richmond.

“Daddy and (former NASCAR Cup Series champion) Joe Weatherly were partners until Joe got a factory deal with Ford in 1956 and daddy bought him out. I was very fortunate to be raised around Joe. As a kid I can remember sitting in the floorboard of his race car when it was driven over from the shop to one of the racetracks was in Norfolk.

“It’s been a helluva ride,” continued Sawyer, who worked as an executive at Richmond before purchasing and totally rebuilding VMS in 2000. “I never really saw myself as a dirt track owner, but when the opportunity afforded itself after we got out of the NASCAR situation it was kind of nice to come back to the dirt where the family all started in racing. I’ve enjoyed it immensely for the last 12 years.”

Pit gates will open at 3 p.m. and the spectator gates will be unlocked at 4 p.m. on both April 15 and 16. Practice is scheduled to begin at 6 p.m. each day, with action starting at 7 p.m. on Friday (time trials) and Saturday (B-Mains).

Sun., April 17, has been reserved as a rain date for Saturday’s competition.

Fans can purchase tickets in advance by visiting www.vamotorspeedway.com, downloading the ticket order form and sending it to the track with a money order or cashier’s check (no personal checks) or by calling the speedway office at 804-758-1867 from 9 a.m. to 4 p.m. Monday through Friday and using a Mastercard, Visa or Discover card.

All tickets are general admission. No reserved seats will be sold for the event.

Free camping (no hookups) will be available in designated areas on the speedway grounds for the Commonwealth 100 weekend.

For complete information on the Commonwealth 100, log on to www.vamotorspeedway.com.

Additional info on the WoO LMS is available by visiting www.worldofoutlaws.com.