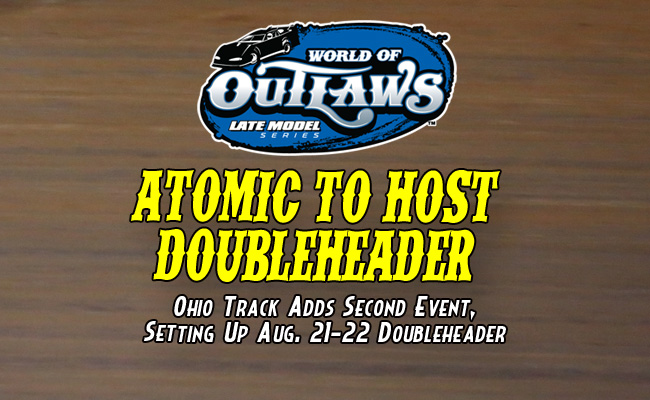 The additional Atomic event, which replaces a recently canceled race at Stateline Speedway in Busti, N.Y., gives the national tour a three-race weekend with Eriez Speedway in Hammett, Pa., set to host the series on Sun., Aug. 23. The weekend opener at Atomic on Fri., Aug. 21 will pay $8,000 to the winner, while the event on Sat., Aug. 22 will pay $10,000.

“With a second night at Atomic Speedway, an already big weekend for the World of Outlaws will now be even bigger,” said WoO LMS Director Tim Christman. “I want to thank Brad McCown for jumping on the chance to have the series at Atomic on back-to-back nights. We also appreciate all of the other tracks that expressed interest in filling the open date.”

Support division action at Atomic will feature AMRA modifieds and sport mods both nights. For information on camping at the track and to reserve a camping spot, call 740-703-9749 or 740-701-2908. General admission prices are $22 on Friday and $25 on Saturday with children 12 and under free.