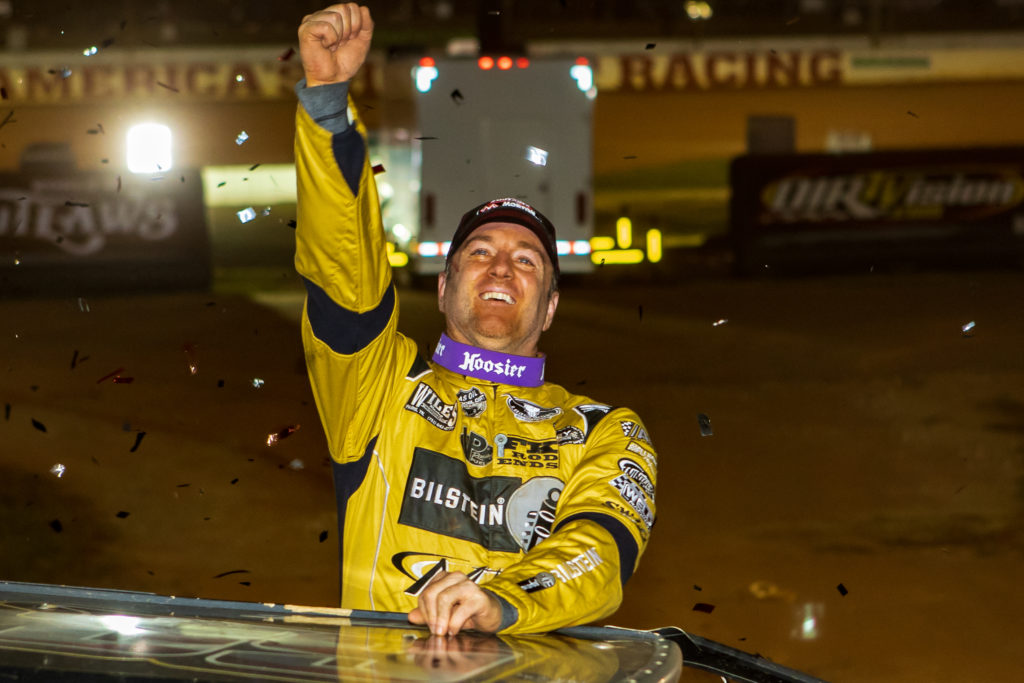 Racing a dirt late model at The Dirt Track on Charlotte in 35 previous events, T-Mac had fallen short in all 35 attempts. On Thursday night, he finally changed that with a Last Call triumph that was 17 years in the making.

Driving by Ricky Weiss with a pitch-perfect slide job on lap 31, McCreadie of Watertown, N.Y. survived a late bid from Brandon Overton to win his first-career late model feature at the Concord, N.C. 4/10th-mile.

The 46-year old, with a resume worthy of eventual National Dirt Late Model Hall of Fame induction, has won on four occasions at Charlotte with the Super DIRTcar Series Big Block Modifieds, but Thursday’s triumph marked his first at America’s Home for Racing behind the wheel of a late model.

“Hats off to Paylor Motorsports, this is our home race for Donald and Gina [Bradsher],” McCreadie said on delivering a win for his car owners. “It’s pretty amazing to win here. I thought it was over in turn one when I made that mistake at the start. We were able to battle back and that’s pretty special considering the guys we had to race against.”

Falling as far back as seventh on the on the seventh circuit, McCreadie quickly recovered from his opening lap mistake and worked his Longhorn Chassis No. 39 back to third on lap 16 and into second on lap 20. Attacking Weiss, who commanded the opening 30 laps from the outside pole, McCreadie capitalized on several restarts to build his momentum and finally clear a turn one slider on the 31st lap.

“It’s tough when you lead all those laps, we’ve all been there,” McCreadie noted on snookering Weiss. “I think the track changed at some point and I found a little bit of a cushion. I was really hooked up and timed it right on those restarts. I tried to be cautious on that slider so I didn’t K-O him there, and we ended up coming out clean.”

After leading the first 30 circuits, Ricky Weiss of Headingly, Man. brought his Drydene Performance Products No. 7 home with a second-place finish to close out the year. It matched his career-best result at The Dirt Track at Charlotte to go along with his career-best finish in World of Outlaws Morton Buildings Late Model Series points, which officially wrapped up on Thursday with Weiss as the runner-up.

“I’m just proud of my guys and everyone who helps us,” Weiss spoke in his final podium of the Outlaws season. “Thank you to everyone who is a part of this team. A lot of folks from Drydene are here tonight and I really a win for them. We ran our hearts out though, and that’s all we can do. Maybe next year we’ll get that win here.”

Brandon Overton, who topped Wednesday’s Last Call feature, finished third in Wells Motorsports No. 76. Rounding out the top five on Thursday was Smokey Chris Madden in fourth aboard his Drydene No. 44 and Mac Daddy Dale McDowell in fifth with his E-Z-GO No. 17M.

Closing out the top ten in the season finale was Steven Roberts running sixth-from-15th, High Side Tickler Kyle Strickler putting his No. 8 in seventh, Kyle Larson earning a career-best finish of eighth with World of Outlaws Late Models, Jonathan Davenport placing his No. 49 in ninth, and Chad Finley in the tenth spot from 18th.

With 14 wins, 31 top fives and 36 top tens in 40 features this season, Sheppard of New Berlin, Ill. came out on top by 282 points to win his third World of Outlaws Morton Buildings Late Model Series championship in the last four years.

The potent Rocket1 Racing crew – including crew chief Danny White, tire guru Austin Hargrove, and floater Joel Rogers – has been a steady five-man unit throughout this entire dynasty-like run. For car owner Mark Richards of Shinnston, W.V., this is his seventh career owners championship (four with Josh Richards, three with Sheppard); extending his reign as the most dominant car owner in World of Outlaws Late Model Series history.

With an uncertain 2020 season now in the rear view mirror, attention turns to 2021 where the World of Outlaws Morton Buildings Late Model Series is set to run the biggest campaign in the 20-year history of the series. It all kicks in just over two months with the Sunshine Nationals at Volusia Speedway Park on January 14-16. You can view the full 2021 schedule HERE and start planning your next year today.

The Late Models portion of Last Call is over, but racing at The Dirt Track at Charlotte continues for two more nights. On Friday and Saturday, the World of Outlaws NOS Energy Drink Sprint Car Series concludes their 2020 season at the North Carolina track. with a champion still undecided. You can watch all the action LIVE on DIRTVision.