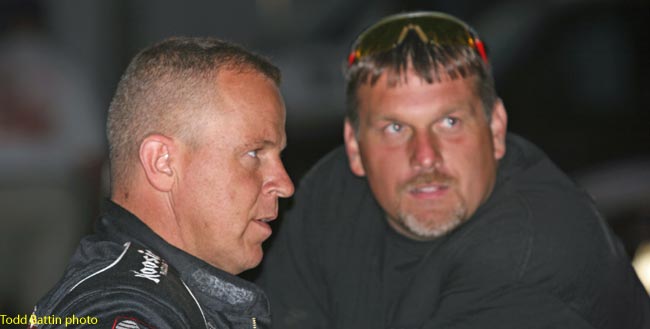 Edwards, of course, has been Lanigan’s right-hand man for most of the past decade – except, most glaringly, in 2008, when Lanigan won his only World of Outlaws title. That missed celebration with his longtime boss and friend – along with oh-so-close points finishes upon his return in ’09 and ’10 – has Edwards salivating to guide Lanigan back to the promised land.

And as the WoO LMS heads for its lone 2011 stop in Lanigan and Edwards’s home state this Saturday night (April 30) to contest the ninth annual ‘My Old Kentucky Home Shootout’ at Bluegrass Speedway, the driver/mechanic combination appears to be in championship form. No tour regular has performed better through this season’s first five events than Lanigan, who has two wins and ranks fifth in the points standings despite missing the season-opening race in February due to a medical issue.

Could Union, Ky.’s Lanigan pull off a historic comeback to win the title after spotting his rivals one race? Ask him that question, and the low-key, 40-year-old standout will calmly say, “I know we can.” He has, after all, already closed within 44 points of leader Josh Richards entering this weekend’s doubleheader at Hartford (Mich.) Motor Speedway (April 29) and Bluegrass; last year he was 78 points behind in July but rallied to grab the lead before falling a heartbreaking four points short of Shinnston, W.Va.’s Richards, who won his second straight crown.

Edwards, 36, is equally confident about Lanigan’s chances. He views Lanigan’s absence from the tour’s 2011 lidlifter on Feb. 17 at Volusia Speedway Park in Barberville, Fla., not as a handicap but as an opportunity to create a special season.

“All we can do now is try to do something nobody’s ever done before,” Edwards said when Lanigan returned for the second WoO LMS event at Volusia. “We were down more (points) last year and came back to take the lead, so we can do it. We always just go out there and try to win every race and prepare our car for no DNFs, and as long as we get some luck – like no flat tires, which is what killed us last year – the points fall into place.”

In the final analysis, Edwards’s dream of sharing the WoO LMS championship stage with his buddy and longest-running employer is too strong to be wiped out by some early-season misfortune.

“Considering how long Darrell and I have been together, it would mean a lot to both of us if we won the championship together,” said Edwards, who worked for Earl Pearson Jr. in 2008 and directed the Jacksonville, Fla., driver to the Lucas Oil Late Model Dirt Series title. “We’ve come close the last couple years, so hopefully this will be the year we get it done. I definitely want to win it with him.”

A life-long racetrack rat – he was born on a Wednesday in Alexandria, La., and his mother had him at the nearby Forest Hill Speedway for the first time just three days later – Edwards has spent the lion’s share of his professional years in the sport at Lanigan’s side. After getting his start as a dirt-track mechanic following his graduation from high school in 1992 when he went to work for Late Model/Modified star Doug Ingalls of Longview, Texas, he moved on to spend four years (1993-97) with Louisiana’s Ronnie Poche and three more (1998-2000) with Baton Rouge’s GVS Racing, where he helped Billy Moyer to a sweep of Eldora Speedway’s Dream and World 100 in ’98 and also worked with drivers Rick Aukland, Bart Hartman and, for a short time late in the ’00 season, Lanigan. When Lanigan left GVS he offered Edwards a job working for him in Kentucky; Edwards accepted and since 2001 has been separated from Lanigan only in 2006 (he returned home to Louisiana to turn wrenches for Garrett Durrett) and 2008.

“Me and Darrell just seemed to hit it off when he ran for GVS,” said Edwards, who now lives in Walton, Ky., with his wife of seven years, Laurie. “We’re like brothers – we argue and bicker, but that’s just how we get along. He’s hard-headed and I’m hard-headed, so it just seems like every so often we need a little break from each other.

“But I’m getting too old for that now. I’m done moving around, so I think he’s stuck with me for a little while now.”

That’s a good thing for Lanigan since Edwards has become one of dirt Late Model racing’s most well-respected mechanical minds, as evidenced by the lofty personal recognition he earned for his role in leading Lanigan to a career-high seven WoO LMS A-Main wins and a runner-up finish in the points standings last season. He received the circuit’s 2010 Crew Chief of the Year award in a vote of his touring mechanical peers and series officials.

But while Edwards was honored to be tapped as the top wrench because he was singled out by “the guys you race against every night,” he wasn’t completely satisfied since Lanigan fell short of the points title. His goal is to seal that deal with Lanigan this season.

So far, so good, for Edwards, his boss and the team’s other crewman, D.J. (‘Bo-Bo’) Cullen. Lanigan managed just a 15th-place finish in his WoO LMS season debut on Feb. 19 at Volusia, but in the three events since then he has victories in the ‘Cash Cow 100’ on March 19 at Columbus (Miss.) Speedway and the ‘Sunshine 50’ on March 25 at Ocala (Fla.) Speedway and a third-place finish in the ‘Commonwealth 100’ on April 17 at Virginia Motor Speedway.

Making Lanigan’s run even more impressive, only one other WoO LMS regular, Austin Hubbard of Seaford, Del., has more than one top-five finish this season. What’s more, Lanigan has been fighting through annoying lower-back pain all season; doctors recently diagnosed the source of Lanigan’s ailment as a fractured tailbone.

Bluegrass Speedway would seem to be a fine place for Lanigan and Edwards to continue their early-season roll. No WoO LMS traveler has enjoyed more success there than Lanigan, who owns eight career feature wins at the half-mile, high-banked oval promoted by David and Anita Ferrell. His greatest triumphs at Bluegrass came in 2003, when he captured May’s inaugural ‘My Old Kentucky Home Shootout’ (then a Northern All-Stars Late Model Series event) with a white-flag-lap pass of Don O’Neal and returned in the fall to pocket a $60,000 prize for winning the 100-lap Dirt Track World Championship.

“Darrell just likes that place for some reason,” Edwards said when asked about Lanigan’s strength at Bluegrass, which is about a two-hour drive from the team’s shop. “He’s always done well at big, fast tracks so I guess it fits his style. We’re definitely looking forward to getting back there.”

Lanigan was a serious contender in last year’s first-ever WoO LMS event at Bluegrass, challenging eventual winner Jimmy Owens during the race’s first half. But, after his car’s front end was bent from contact with Owens while battling for the lead on lap 21, he found himself hanging on for the remainder of the distance and settled for a third-place finish.

Saturday’s program, which also includes an $800-to-win DIRTcar UMP Modified feature, will serve as Bluegrass’s 2011 season opener. Pit gates will open at 2 p.m. and spectator gates will be unlocked at 3 p.m., with hot laps set to begin at 5:30 p.m. followed by time trials at 6 p.m. and racing at 7 p.m.

Bluegrass Speedway is located at 2221 New Haven Road in Bardstown, Ky., at the intersection of Kentucky Highway 31-E and exit 21 of the Martha Layne Collins (Bluegrass) Parkway.

More information about Bluegrass Speedway can be obtained by logging on to the track’s Web site at www.bluegrass-speedway.com or calling 502-349-1241 on raceday.