A NIGHT LIKE NO OTHER: Brandon Overton Banks $50,000 in Wild USA Nationals Finale 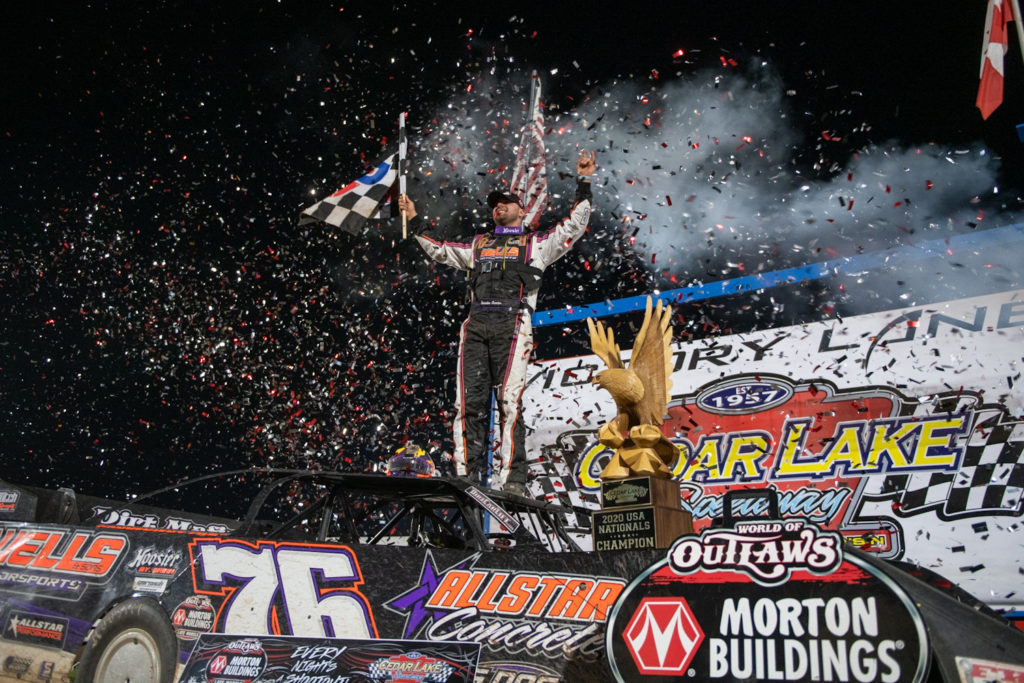 It was a night, no, a weekend, that should’ve been solely about celebrating Brandon Overton and his history-making performance at Cedar Lake Speedway. After all, “Big Sexy” controlled the final 57 laps on Saturday night’s 100-lapper to score $50,000 with his first career USA Nationals title – becoming the ninth different champion in as many years, and the eighth first-time winner since 2012.

For Overton of Evans, Ga., Saturday’s $50,000 triumph of Cedar Lake’s USA Nationals joins his $30,000 score from Lernerville’s 2017 Firecracker as his second Crown Jewel victory. An accomplishment coming in a 2020 season where the 29-year old has risen the ranks into contention as one of the best dirt late model drivers in the country. Unfortunately, due to the acts of others, Overton’s dominance aboard the Wells Motorsports No. 76 Longhorn Chassis powered Clements Race Engines won’t attract all the love he deserves.

It all changed on lap 85, when a caution created one of the craziest and most shocking moments in World of Outlaws Morton Buildings Late Model Series history. The infamous incident between Tyler Erb of New Waverly, Tex. and Bobby Pierce of Oakwood, Ill. quickly sent social media into a frenzy.

There was contact, then there was retaliation, and more retaliation, and more retaliation, before a crew member became involved, and ultimately a World of Outlaws official went flying to the ground. Erb was disqualified and towed off to the roar of boos from a standing-room only crowd, while Pierce too was sent to the pits for crew members entering the racing surface. A full penalty report with additional ramifications for the incident is expected to come this week.

For Overton though? The $50,000 check is still going to cash the same way come Monday morning.

“I never in a million years dreamed that I would win this,” Overton exclaimed in victory lane. “I’m just a boy from Georgia trying to get it done. I don’t know what to say.”

Starting from the fifth spot in the 100-lap feature, “that boy from Georgia” quickly made his way to the second spot by lap nine and followed suit of pole sitter and leader, Billy Moyer. While the track continued to widen out, Overton bided his time behind Moyer, sitting through a few rounds of lap traffic, before waiting to pounce when the time was right.

That time came on lap 44. With the help of lap traffic, an observant Overton methodically watched the ever-changing surface and made his move underneath Moyer off turn two to secure the race lead.

“I was riding around and I could see the top kind of die off, then the bottom came in,” Overton said on track conditions. “Then I could see the bottom die off and I had to move up. I kind of knew both routes, like which line I needed to use if I had to protect. My car was really good there through the middle especially. Funny thing is, I was like a half-second slow in hot laps tonight and thought we were terrible. Everything worked out though. I was just trying to manage my tires all race long really.”

It seemed as if Overton’s biggest challenge awaited when 2018 USA Nationals winner and reigning World of Outlaws Late Models champion, Brandon Sheppard, roared into second on lap 56. Coming from 11th-to-2nd, the Rocket1 Racing No. 1 cut into Overton’s gap before eventually stalling out and losing momentum.

Going up in smoke on lap 85, Sheppard’s attempt at stopping Overton ended at the same time of the Erb/Pierce incident, as he was pushed back to the pits with motor trouble. With a massive shakeup in the running order, it seemed as if Overton had a whole new crew chasing him to the final restart with 15 laps left.

None of the veterans entering the mix or the legends still in play could throw anything at derailing the No. 76, however, as Overton controlled the last segment and drove away to a 2.213-second advantage at the checkered flag with $50,000 and his first career USA Nationals title waiting for him in victory lane.

“This is so cool man,” an enthused Overton let out. “It’s an honor for me to be in the discussions with Brandon [Sheppard] and Jimmy [Owens] this year. I’ve got a lot of catching up to do if I’m gonna be as good as those two are though. All we can do is keep going, I want to win all the time.”

Driving the Drydene Performance Products No. 0e, Rick Eckert of York, Pa. ended up with a second-place finish from 12th in Saturday’s USA Nationals finale. A runner-up effort worth $20,000, “Scrub” stayed patient and capitalized on the trouble for others to guide his Rocket Chassis to the front. It’s the first time the former World of Outlaws champion is back on the USA Nationals podium since he won the event way back in 2002.

“This is a difficult race and it’s hard on an old guy, that’s for sure,” Eckert joked afterwards. “It’s just so fast early on and the track changes so much over 100 laps. “I really thought I would have a shot there at the end after I saw Brandon [Sheppard] was smoking and then we got that restart. Overton was just too good in clean track, he’s a hard guy to beat. We’re not gonna hang our heads running second to him. Hopefully we can come back next year!”

Rounding out the podium and leading the charge for the home state was Menomonie, Wisc. native Jimmy Mars in the third spot. “The Iceman” picked up his fifth career USA Nationals podium finish (first since 2014) and made it 11 top five finishes, an event record he shares with Billy Moyer. After starting ninth, it was a slow, but steady crawl to the front for the MB Customs No. 28.

“We started out really fats and had little spurts of speed, but then we got slow there, and then picked it up again,” Mars commented on his pace. “We definitely got fortunate with some of the others dropping out, but sometimes you gotta be lucky.”

A pair of legends in Scott Bloomquist and Billy Moyer rounded out the top five in the 100-lap feature. Ricky Weiss, who used a World of Outlaws points provisional to start 25th, ended up as the Hard Charger with an impressive +19 run to the sixth spot in his Team Drydene No. 7.

Closing out the top ten at the 33rd annual USA Nationals was Iowa’s Chris Simpson in seventh, “The High Side Tickler” Kyle Strickler in eighth-from-2oth, New Mexico’s Stormy Scott in ninth-from-18th, and South Carolina’s Ross Bailes in his Cedar Lake Speedway debut from 27th-to-tenth.

The World of Outlaws Morton Buildings Late Model Series has next weekend off before returning to action with a big four-day swing through Pennsylvania and Ohio in two weeks. On the docket for that trip is Lincoln Speedway on Thursday, August 20, Williams Grove Speedway on Friday, August 21, Sharon Speedway on Saturday, August 22, and Eriez Speedway on Sunday, August 23. Tickets for all four events can be purchased HERE.