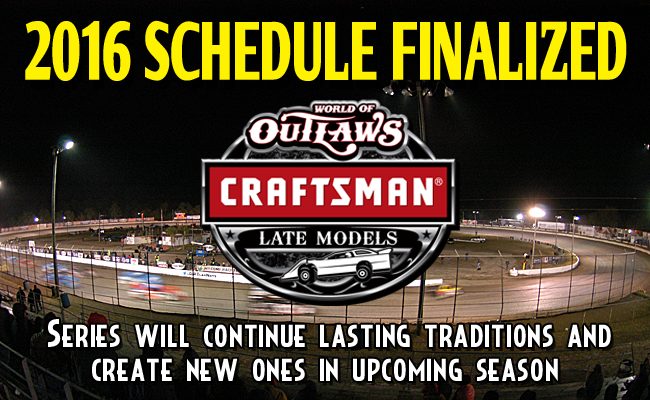 CONCORD, N.C. – Feb. 8, 2016 – As the 2016 World of Outlaws Craftsman® Late Model Series season gets ready to begin, the final dates in the 2016 schedule have been set. In all, the season will feature nearly 50 scheduled A-features at more than 30 tracks across the United States.

As the series kicks off the season, it looks forward to taking on old favorites, expanding historic traditions and writing a new chapter in its history at three new facilities.

This country’s longest-running dirt late model series opens the 2016 season at Screven Motor Speedway in Sylvania, Ga. on Feb. 12. The first event leads to Volusia Speedway Park for DIRTcar Nationals, Feb. 18 to 20. The coveted Big Gator is up for grabs as the Outlaws competitors seek to take home the DIRTcar Nationals title.

The series then takes on Farmer City (Ill.) Raceway for the Illini 100 on March 31 and April 1 and 2. In two of the biggest nights of late model racing during the season, fierce competition battles for the $15,000-to-win prize.

In addition to DIRTcar Nationals and the Illini 100, the World of Outlaws takes on blockbuster features throughout the 2016 season. The Jackpot 100 at Tyler County Speedway in Middlebourne, W.V. welcomes the Outlaws for two days of racing action on May 28 and 29.

One of the biggest storylines of the 2016 season will take place the weekend before the Fourth of July. For the first time ever, the World of Outlaws will combine with the DIRTcar Summer Nationals at Federated Auto Parts Raceway at I-55 in Pevely, Mo. on July 2 and Lincoln (Ill.) Speedway on July 3. Both races will utilize the Summer Nationals format, meaning no entry fee for competitors and the unique group qualifying and heat races.

Following the shootout series, the Outlaws take on a stretch of seven events in ten days starting at Hamilton County Speedway in Webster City, Iowa on July 7. The series then backs it up with an inaugural trip to Mason City (Iowa) Motor Speedway on July 8.

Aside from Mason City, two other tracks will join the World of Outlaws Craftsman Late Model Series this season for the first time ever. Those tracks are Moler Raceway Park in Williamsburg, Ohio on May 27 and Park Jefferson International Speedway in North Sioux City, S.D. on July 16.

The Outlaws return to the famed Fairbury (Illinois) American Legion Speedway in the middle of the summer on July 29 and 30 for the Prairie Dirt Classic. As the summer works to its end, the Outlaws head to Merritt Speedway for another newly expanded, two days of action on Aug. 26 and 27. The format for the new event will be announced in the coming months.

The crown jewel of the series season, the USA Nationals at Cedar Lake Speedway, returns in 2016 on Aug. 5, 6 and 7, as the series competitors seek to take home the coveted title. The three-day event with a $50,000-to-win finale on Aug. 7, brings together the best late model drivers from around the country to battle it out in one of the fiercest fights of the season.

Lernerville Speedway in Sarver, Pa. welcomes the Outlaws twice in 2016 for the Firecracker 100 June 23 to 25 and the newly-expanded Working Man Weekend on Labor Day weekend, Sept. 2 and 3. The Working Man will feature a new format to be announced in the coming months.

The season wraps up at the Bad Boy Buggies World of Outlaws World Finals at The Dirt Track at Charlotte in Concord, N.C., Oct. 27 to 29, as the series crowns its champion.