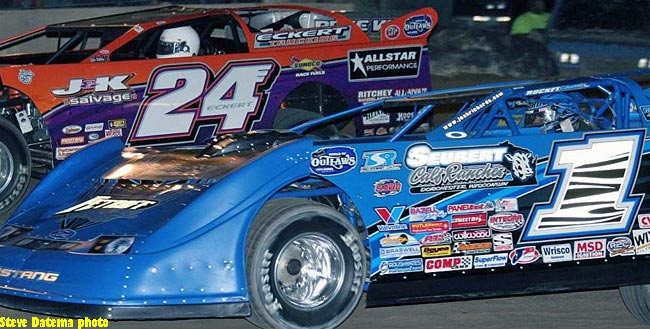 CONCORD, NC – Sept. 7, 2013 – The 2013 World of Outlaws Late Model Series will kick off with the busiest month of February in the history of the national tour.

The three tracks that hosted WoO LMS events in February ’12 – Screven Motor Speedway in Sylvania, Ga., Bubba Raceway Park in Ocala, Fla., and Volusia Speedway Park in Barberville, Fla. – will be featured again come 2013, but changes in each facility’s program will produce more lucrative action for teams and more excitement for fans.

A total of eight WoO LMS A-Mains will be contested over a three-week stretch in February ’13, highlighted by the inaugural $20,000-to-win ‘Super Sunday Showdown’ that will close the second annual Bubba Army Late Model Winter Nationals on Feb. 15-17 at Bubba Raceway Park.

In addition, Screven’s second annual ‘Winter Freeze’ event has been restructured to include a pair of full WoO LMS racing programs on Feb. 8-9 and Volusia’s 42nd UNOH DIRTcar Nationals presented by Summit Racing Equipment will for the first time boast three consecutive nights of WoO LMS competition from Feb. 21-23.

“The 2013 World of Outlaws Late Model Series is definitely going to start in unprecedented fashion,” said WoO LMS director Tim Christman. “We think this schedule of events will be very attractive for both the racers and fans. In a span of three winter weeks teams will have a chance to race for over $400,000 in purses, including $85,000 in first-place prizes alone.”

With a track-record $20,000 first-place check on the line in the ‘Super Sunday Showdown,’ BRP co-owner ‘Bubba The Love Sponge’ Clem is anticipating that the already intense action at his unique track will reach an even loftier level.

“We wanted to make the Bubba Army Late Model Winter Nationals even bigger in 2013 for the fans and race teams and I think we’ve done it,” said Clem, a nationally-known syndicated radio show host. “Running a $20,000-to-win show on Sunday night before everybody goes over to Volusia (for the DIRTcar Nationals) seems like a perfect fit. The fans are gonna love seeing all the best drivers come together for the biggest-paying race of Georgia/Florida Speedweeks.”

A practice night at BRP is scheduled for Thurs., Feb. 14.

The three-eighths-mile Screven Motor Speedway, meanwhile, will present the season-opening WoO LMS event for the second consecutive year. In 2013, however, promoter Redd Griffin will spin off two complete programs, running a 40-lap, $8,000-to-win A-Main on Fri., Feb. 8, and a 50-lap, $10,000-to-win show on Sat., Feb. 9.

Dirt Late Model teams will have an opportunity to practice at Screven on Thurs., Feb. 7.

VSP’s UNOH DIRTcar Nationals presented by Summit has included two scheduled WoO LMS programs in each season since 2005, but World Racing Group officials decided to up the ante in ’13 with an additional full-fender World of Outlaws date. The dirt Late Model portion of the DCN will now begin in ’13 with three nights of DIRTcar UMP-sanctioned action (Feb. 18-20) and close with a WoO LMS tripleheader.

More information on the WoO LMS events in February 2013 is available by logging on to www.screvenmotorspeedway.com; www.bubbaracewaypark.com; and www.DIRTcarNationals.com.