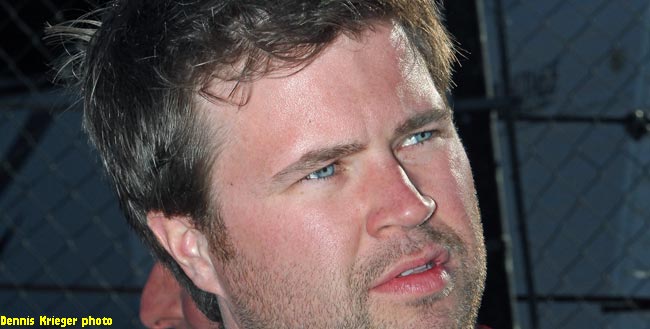 SARVER, PA – June 18, 2013 – Gregg Satterlee has a love/hate relationship with the Firecracker 100 Presented by GottaRace.com at Lernerville Speedway.

On one hand, he absolutely adores the event. On the other hand, the 100-lap World of Outlaws Late Model Series A-Main has brought him nothing but frustration.

Conventional wisdom would point to Satterlee being one of the poster boys for the Firecracker 100, which celebrates its seventh annual running on June 27-29. He’s young (28 years old), lives just an hour from Lernerville (in Rochester Mills, Pa.), has proven himself at the four-tenths-mile oval (13 career wins) and has emerged in recent years as a regional standout (2012 Three State Flyers Series champ, ’13 Allegheny Mountain Speedweek titlist, strong runs in WoO LMS competition).

But as Satterlee readily admits, his performance in his home state’s richest dirt Late Model race has been forgettable. He has entered every Firecracker 100 but hasn’t finished better than 16th in four feature starts – a blemish on his burgeoning resume that he is aiming to rectify during this year’s summer-starting spectacular, which includes 30-lap, $6,000-to-win preliminary WoO LMS A-Mains on Thurs., June 27, and Fri., June 28, leading into the 100-lap finale offering a $30,000 first-place prize on Sat., June 29.

“We’ve never been good in the 100-lap race,” said Satterlee, who launched his dirt Late Model driving career the season before the inaugural Firecracker 100 was contested in 2007. “We used to run at Lernerville every week and could win 25-lap races without a problem, but it seems like when they drop the green flag for that race we’re just not where we need to be.

“Sure, the competition is definitely a lot tougher than on a regular Friday night there. But in every 100 we’ve been in there, as soon as the green flag has come out, I’ve felt that we were off. We have to figure out what we need to do to get a little bit better.”

Satterlee’s struggles in the Firecracker 100 are perplexing – not only to him, but also dirt Late Model observers who have watched him grow into a bona fide threat wherever he unloads his family-owned Rocket cars. It seems inconceivable that a driver who’s shown as much potential as Satterlee – at least one top-five WoO LMS finish in four of the last five seasons, an impressive 12 feature wins at 10 different tracks in 2012 – would have no memorable outings in the marquee event at a track he knows well, but that’s indeed the case.

Ask Satterlee to pinpoint the source of his Firecracker 100 misery and he’ll calmly respond.

“We’re missing on the setup,” said Satterlee, who when not racing works as a fuel truck dispatcher at his family’s Satterlee Petroleum Distributors. “The track gets so slippery (during the Firecracker) so you put hard tires on – and basically, from what you’re used to running there, you’re in a completely different condition. Even though it can be slippery on a regular night too, when you put those hard tires on (for the Firecracker) your car immediately handles differently.

“The tires make a huge difference. What you’re used to feeling when you’re racing there…when you put hard tires on, you don’t get that feeling anymore. So you almost have to race different and have a different setup on the car.

“I think we need to aim to do a little better with making that adjustment (for the tires) as well as look to be smooth and patient for the whole race,” he added. “I have no doubt that if we have a good car we can run at the front of that race – I have no doubt. But we need to make the right decisions so we’re good enough to be there at the end of (the 100) instead of standing in the infield watching it.”

Satterlee considers his quest for Firecracker 100 success to be another facet of his dirt Late Model education. With less a decade of racing under his belt, he’s still a relative newcomer to the sport. He’s attempted to speed up his maturation process by running against top-notch competition (he’s entered 81 WoO LMS events since ’07 and started 54 A-Mains) and associating himself with veteran mechanical hands like Robby Allen, the former Rick Eckert crew chief who is in his second season as Satterlee’s head wrench.

“I think a lot of it is that you just gotta race and race and race,” said Satterlee, whose career-best WoO LMS finish is fourth (July 29, 2010, at Sharon Speedway in Hartford, Ohio, June 16, 2012, at Maryland’s Hagerstown Speedway and Feb. 8, 2013, at Bubba Raceway Park in Ocala, Fla.). “It’s a long learning curve. I think we’re getting better, learning stuff each race about what we need to do in different conditions. Robby and I are working together better and better. I think we got a good team, good cars, good motors (Roush Yates) – a real good package. We just gotta keep racing with the better group of cars and learning how to do things right.

“There’s a big difference when you race against the regional guys and then unload at a race like (a WoO LMS event). The regional guys we race against are certainly good, but you realize that these fulltime guys are as good as it gets. Compared to the normal way you’re comfortable racing, they are just going a little bit harder and they’re comfortable. You realize that you almost have to drive above your comfort level to race with them. You just gotta go as hard as you can every single lap – and if you slow down, you’re gonna get passed.

“I think we can do that now more consistently, especially at tracks we know better,” he concluded. “But we still have a ways to go.”

With 14 starts in the 22-day span between May 24 and June 15, Satterlee’s skills should be razor-sharp as he looks toward the Firecracker 100. He’s hoping he’s ready for the big tripleheader that presents a unique challenge.

“You’ve got three nights and it seems like you always get three different racetracks there,” Satterlee said of Lernerville. “You can’t necessarily think because you’re good Thursday that you’re gonna be good Friday or good Saturday. I think you just gotta pay close attention to what the racetrack is doing and have two good nights leading up to Saturday night so hopefully you’ll get a good starting spot (in a heat race).”

Could Satterlee become the first home-grown Pennsylvania to win the Firecracker 100? He’s definitely considered the possibility.

“It would be the biggest win in my career by a lot,” said Satterlee, who this season has registered three of his 47 career dirt Late Model victories. “I’m sure it would be a lot of fun afterward. We’d be there all night partying. We’re only about an hour away from the track, so we have a lot of family and fans who come to watch us at Lernerville.

“I’d even take a win in one of those preliminary races – like Stoney (Dan Stone) pulled off last year – as a first step towards winning the big one. But it’ll be fun either way. It always is there.”

Indeed, for Satterlee, the Firecracker 100 is a race weekend that simply can’t be a downer no matter his results.

“It’s my favorite race to go,” said Satterlee. “I love Lernerville, and it’s a cool event. (Lernerville general manager) Gary Risch (Jr.) and his staff do a great job for the fans and the racers with everything they have going on there – like the horseshoes and Cornhole (tournaments), the kick-ball game this year, the concert after the races. It’s just a lot of fun.

Three-day Firecracker 100 reserved-seat packages value-priced at $69 for adults and $19 for children 10-and-under – with a free fan pit pass for Thursday and Friday included if purchased by midnight ET on Wed., June 26 – and single-day tickets are on sale at www.lernerville.com and www.worldofoutlaws.com/tickets or by calling 724-353-1511.

Additional info on the Firecracker 100 Presented by GottaRace.com can be obtained by logging on to www.lernerville.com or calling 724-353-1511.