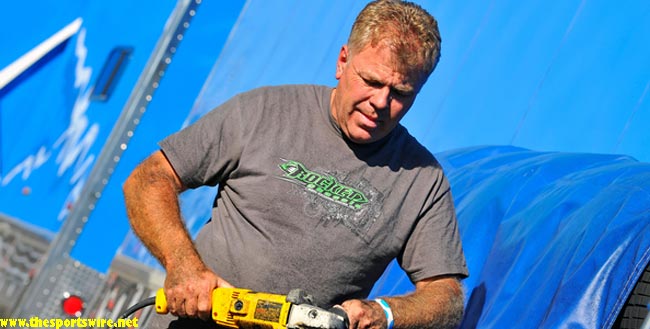 ELBRIDGE, NY – Sept. 28, 2011 – When the World of Outlaws Late Model Series ends a six-year absence from the Super DIRT Week schedule with a visit to Rolling Wheels Raceway Park on Thurs., Oct. 6, Mark Richards will renew his own connection to central New York’s huge fall festival of speed.

The father/car owner of two-time defending WoO LMS champion Josh Richards might be a life-long dirt Late Model loyalist, but he also happens to possess some under-the-radar history at the biggest event of the year for the Northeast’s DIRTcar Modified division.

“I’ve been up there a few times over the years,” said the 50-year-old Richards, a well-known figure in the full-fender industry as the co-owner of Rocket Chassis in Shinnston, W.Va. “I know what that deal is about. For all those Modified people in New York, Canada and throughout the Northeast, it’s their Super Bowl weekend.”

Richards made his first trip to Super DIRT Week – the annual showcase of DIRTcar Modified racing encompassing action at the one-mile New York State Fairgrounds in Syracuse, N.Y., and other nearby short tracks like the Wheels – in October 1979 when he was the teenage crew chief of the Ed Howe house car driven by Rodney Combs. The period’s vaguely-written DIRTcar Big-Block Modified rules allowed Richards and Combs to enter Howe’s dirt Late Model in the open-wheel class’s marquee race at the menacing Moody Mile.

One year later Richards returned to Super DIRT Week with Combs, this time to run a satellite National Dirt Racing Association (NDRA) Late Model event at Rolling Wheels. They also ended up at the big track, where they found themselves with a front-row seat for one of the most controversial moments in the history of DIRTcar Big-Block Modified racing.

Today Richards is well aware of Super DIRT Week’s lofty stature in the short-track racing world – the Big-Block Modified division’s 40th annual SEF Small Engine Fuels 200 Presented By Ferris and Snapper on Sun., Oct. 9, pays $50,000 to win – but he was largely oblivious to the event when he drove through the pit gate of the Syracuse Mile as Combs’s fresh-faced right-hand-man in ’79.

“I’d been to Northeast Big-Block Modified races around home at places like Lernerville, Motordrome and Latrobe, but never a race like Syracuse,” said Richards, who is 10 years younger than Combs. “I’d never even seen a track that big, so for me it was a new experience.”

It was Howe, a respected Beaverton, Mich.-based chassis guru in both dirt and asphalt Late Model racing, who pointed Richards and Combs toward Syracuse that year. With big money on the line (’79 SEF 200 winner Jack Johnson pocketed $23,380) and independent front suspension dirt Late Models legal for competition with some modifications, the race was very attractive.

“Ed said, ‘They’re having a big race in Syracuse that we should go run,'” remembered Richards. “Ed explained to us that it’s a Modified race, but if we take the fenders off we can go. So we stripped the car down, made a hood for it and went up there. We unloaded and right off the bat we were one of the quicker cars, but they slowed us down all week. They made us take off our spoiler, raise our roof and do some other stuff

“Larry Moore was there with us with Howe’s other car and I remember that we both made the big race, but Larry blew up in practice the day before the race and we blew up in the last round of practice before the race. Neither of us had another motor so we didn’t get to run.”

Richards and Combs were back at Super DIRT Week in 1980, but in this case expressly to run a mid-week NDRA tour show at Rolling Wheels. It marked the first time that a major dirt Late Model event was part of the multi-day DIRTcar Modified extravaganza, and Combs piloted a Tri-City Aluminum car to victory in the evening’s feature.

While racing at the Wheels that year, Richards and Combs crossed paths with Floridian Gary Balough, a superstar short-track driver who had already won the Syracuse 200 Big-Block Modified event three times. Balough mentioned to Richards and Combs that he was running an exotic Big-Block Modified at the Mile – a cutting-edge machine that would literally shake the foundation of the division – and he invited them to check it out.

“We’d actually been talking to Gary that year about running some Late Model races with us so we knew him,” recalled Richards. “He told us, ‘Hey, we got this car that’s pretty wild. Why don’t you guys come take a look at it?’ So we went over and saw it, and it was really bad-ass trick.

“Then Gary said, ‘You guys coming to the (Modified) race (at the Mile)? You can help pit or whatever, and I’ll let Rodney drive the other (Modified) I have up here.'”

So Richards and Combs went to the big track and were there for Balough’s history-making performance in the ‘Batmobile,’ a black Lincoln-bodied No. 112 that featured a high roof and ground-effects aerodynamics. Built in secret by a band of mechanical talents that included the late Kenny Weld, the car stretched the division’s thin rulebook to the max and ended up being the class of the field. Balough dominated the week en route to winning his fourth career Syracuse 200 in a runaway; Combs, meanwhile, drove Balough’s conventional backup car, the Billie Harvey-owned No. 31, but didn’t start the main event.

“That car Gary drove was unbelievably fast compared to anything else out there,” said Richards. “It was something to see. I’ll always remember that year. That car made (the DIRTcar Modified division) come up with more rules so that things wouldn’t get any further out of hand to where the regular short-track Modified guys would be unable to compete there (at Syracuse).”

Richards has made four Super DIRT Week appearances since his memorable visit in ’80. He returned in ’81 for another NDRA Late Model program at Rolling Wheels, then participated in back-to-back STARS Late Model Series events at the Syracuse Mile in 1995-96 (Tim Hitt drove Richards’s Rocket Chassis house car both years) and a WoO LMS show at Fulton (N.Y.) Speedway in 2004 (Bart Hartman and Josh Richards ran as Rocket Chassis house car teammates).

This year’s 50-lap, $10,000-to-win WoO LMS A-Main at Rolling Wheels – part of an exciting Thursday-evening doubleheader with the Mr. DIRTcar 358-Modified Series – will give Richards an opportunity to taste the unique Super DIRT Week atmosphere once again. He said that after putting in a hard night’s work at the Wheels with his 23-year-old son – Josh enters the race second in the WoO LMS points standings (16 markers behind leader Rick Eckert of York, Pa.) and with an opportunity to tie the tour’s single-season win record (nine) – he might even stop his team’s hauler at the Syracuse Mile on Friday to take in some DIRTcar Big-Block Modified racing.

Richards would recommend a visit to the Mile to any dirt Late Model fan who might be interested in making the trip to Rolling Wheels. Full-fender followers will even have a rooting interest at the big track with three WoO LMS regulars – 2006 tour champion Tim McCreadie of Watertown, N.Y., Tim Fuller of Watertown, N.Y., and Vic Coffey of Caledonia, N.Y. – running Big-Block and 358-Modifieds during this year’s Super DIRT Week.

“I think it’s just a good experience for any fan,” Richards said of Super DIRT Week. “There’s a lot of activity going on up there around the big race and it’s a fair-type atmosphere. It’d be good for any real race fan to go up there and watch a different type of racing at the end of the year.”

Adult reserved seat tickets are available for $39 by logging on to http://dirtcar.ticketforce.com or calling 315-834-6606. Discounted student (ages 10-17) and children (9-and-under) pricing is available for reserved sections (children 9-and-under are free in General Admission seating).

Ticket information and details on all the action during Super DIRT Week, which runs from Oct. 5-9, is available at www.superdirtweekonline.com.