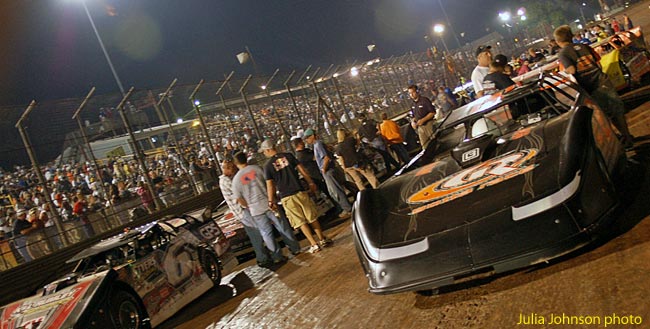 SARVER, PA – June 20, 2011 – This weekend the Dirt Late Model racing community will turn all of its attention towards the Lernerville Speedway for the 5th Annual Firecracker 100 presented by GottaRace.com. Below you will find all the information you need to know to experience the biggest Dirt Late Model race in the Commonwealth of Pennsylvania in 2011.

Following the format that debuted to rave reviews last year, the Firecracker 100 is nowa three-day mega-event and each year gets a little bigger and better than the one before.

Thursday Schedule of Events: Pit gates open at 4:00 and Grandstand gates open at 5:00. Hot laps begin at 6:50, followed by Time Trials at 7:15. Opening Ceremonies are scheduled for 8:00 followed by heat races, Last Chance Showdowns, and a $6,000-to-win, 30-lap World of Outlaws Late Model Series Feature. The first round of the Ms. Firecracker Pageant, a cornhole tournament and the Joe Patrick Band will bring the evening to a close with post-race festivities in the expanded vending area and parking lot.

Friday Schedule of Events: Friday’s activities begin bright and early with a big old country breakfast beginning at 8:00 a.m. served at the pit concession stand! At 3:00 the fine folks from Y108 and Budweiser will be judging the Best Tailgating Party and Best Camp Site. Then the excitement will move back onto the action track for qualifying night #2.

Pit gates open at 4:00 and Grandstand gates open at 5:00. Hot laps begin at 6:50, followed by Time Trials at 7:15. Opening Ceremonies are scheduled for 8:00 followed by heat races, Last Chance Showdowns, and another $6,000-to-win, 30-lap World of Outlaws Late Model Series Feature. A pulse-pounding Fireworks display by Extreme Pyrotechnics will be followed by a concert in the parking lot behind the main grandstands by National Recording Artists Vanessa Campagna and NOMaD.

Saturday Schedule of Events: Breakfast will again be served at the Pit Concession stand at 8:00AM, followed by a Weenie Roast and the ever popular Driver/Fan Horseshoe Tournament at 12 Noon. Pit gates open at 3:00, while the line for the Driver Autograph Session forms near the pit gate at 3:30. The Driver Autograph Session itself starts at 4:00, as each driver in competition will sign autographs for the fans under the grandstands. The grandstands will open at 4:00, but fans will be required to join the back of the autograph line.

The on-track action resumes at 6:50 with hot laps, followed by Opening Ceremonies and heat races at 7:30. Last Chance Showdowns will be followed by the $3,000-to-win Uncle Sam 30 non-qualifiers race. After the Uncle Sam 30, the starting grid for the 5th Annual Firecracker 100 presented by GottaRace.com will be introduced and welcomed with fireworks by Extreme Pyrotechnics. The weekend will come to a close after the Sheetz Victory Lane celebration for the 5th Annual Firecracker presented by GottaRace.com when the pits are open to all fans. The open pits will allow fans up close and personal access to their favorite cars and drivers.

How: Buy tickets in advance by logging on to www.Lernerville.com and clicking the “Buy Tickets” icon or calling the Lernerville Speedway office Monday-Wednesday 9:00 a.m. – 5:30 p.m. at (724) 353-1511. Advance Three-Day Ticket packages will include a FREE Thursday & Friday Night pit pass upgrade and priority access to the driver autograph session Saturday Afternoon. Tickets will also be sold on the day of the event.

Three-Day Advance Reserved Tickets are just $59 for adults and include a FREE pit pass upgrade for Thursday and Friday Night. This offer ends at midnight on Wednesday, June 22, so order now! Other ticket options and prices are listed under the Firecracker 100 tab of www.Lernerville.com.

Who: The 5th Annual Firecracker presented by GottaRace.com is a World of Outlaws Late Model Series-sanctioned event. In addition to the Outlaws’ travelling roster of drivers, previous champions Scott Bloomquist (2007), Brian Birkhofer (2008), Jimmy Mars (2009) and Shane Clanton (2010) are pre-registered for the $30,000 Mega Event.

Why: To crown a $30,000+ Firecracker 100 Champion. The winner’s purse is $30,000; the “+” comes into the equation with monies won during preliminary competition on Thursday and Friday Nights’ complete $6,000-to-win shows. The possibility exists that a driver could leave Lernerville Speedway with $42,000 in their pocket!

Where to Stay: Reserved Camping is available on site, but is almost sold out! Reserved camping provides a flat space with proximity to the pits. General Camping will also be available free of charge on a first come, first serve basis, but will be further away from the track. There are no electric/water hookups in either area, but we will have on-site shower facilities again this season and strategically placed Port-o-Johns thanks to Approved Toilet Rentals.

Other nearby towns with hotels include (arranged in order of proximity) Butler, Kittanning, New Kensington, Cranberry Twp. and Harmar Twp. Of those locations, while a little but further away, The Days Inn in Harmar Twp. probably provides the second best option to Butler as it is a short, easy trip down routes 356 & 28 and the area is loaded with restaurants, hotels and retail options.

How to get involved: As mentioned above, the 5th Annual Firecracker 100 presented by GottaRace.com is more than a Three-Day World of Outlaws Late Model Series Race weekend; it’s a total fan experience! Over the course of the weekend, fans can watch and even participate in activities off the track.

On Thursday Night, after time trials, heat races, Last Chance Showdowns and a $6,000-to-win, 30-lap WoO LMS Feature, the Joe Patrick Band will rock the crowd with a rousing concert in the parking lot, free of charge! But between the racing and the rocking, fans will be re-introduced to the Ms. Firecracker applicants and there will be a driver/fan cornhole tournament in the expanded vendor area behind the main grandstands near turn four. Fans can sign up for the cornhole tournament at the Lernerville Souvenir Trailer Thursday Night.

Friday afternoon’s slate includes a Best Tailgating Party & Best Camp Site Contest judged by the fine folks from Budweiser and the announcement of the finalists for the Ms. Firecracker Pageant. Another complete WoO LMS Show highlighted by a $6,000-to-win, 30-lap Feature will be followed by a dazzling fireworks display by Extreme Pyrotechnics and another concert in the parking lot with National Recordings Artist Vanessa Campagna and Firecracker fan favorite NOMaD.

The off-track fan festivities resume Saturday afternoon with the Annual Driver/Fan Horseshoe Tournament at 12:00. Fans will be selected Thursday and Friday Nights by signups at the Lernerville Souvenir Trailer and T-Shirt tosses. The fan interaction peaks with a pre-race Driver Autograph Session under the grandstands at 4:00. As mentioned above, you can get priority access to the Driver Autograph Session by purchasing your tickets in advance! In between the horseshoes and driver autograph session we’ll squeeze in one more segment with the Firecracker girls and choose three semi-finalists to move on the Sheetz Victory Lane where the new Ms. Firecracker will be announced!

And finally, the pits will be open to all fans after all racing has come to a close after the 5th Annual Firecracker 100 presented by GottaRace.com 100-lap Feature. Fans of all ages can see their favorite drivers and cars up close and personal! The perfect end to what promises to be a FANtastic weekend!!

In Closing: Don’t miss out on the opportunity to take part in this Crown Jewel Event of DIRT Late Model Racing! Call and order your reserved Three-Day ticket package now by logging on to www.Lernerville.com and clicking the “Buy Tickets” icon or by calling the speedway office (724) 353-1511 during normal business hours! For ticket prices and more details about the 5th Annual Firecracker 100 presented by GottaRace.com, log on to www.Lernerville.com and click the Firecracker 100 tab on the left hand side of the page. For more information about the World of Outlaws Late Model Series log on to www.WorldofOutlaws.com.