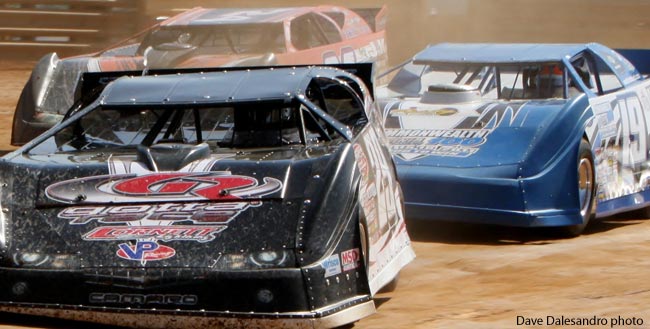 The announcement by series officials includes a rescheduled program at Beckley (W.Va.) Motor Speedway on Wed., July 27, as well as new dates at Dog Hollow Speedway in Strongstown, Pa., on Tues., July 26, and Tri-City Speedway in Pontoon Beach, Ill., on Fri., Sept. 16.

“We’re very excited to add more events to the 2011 World of Outlaws Late Model Series schedule,” said tour director Tim Christman. “Each of the new races will fit nicely alongside previously scheduled shows, creating regional swings that are more attractive to both the race teams and fans that follow the series.”

The WoO LMS will make its first-ever stop at the three-eighths-mile Beckley facility on July 27, invading for a mid-week special after the tour’s originally-scheduled visit on Fri., May 27, was postponed. Beckley promoter Jim Williams agreed to find a new date for his track’s World of Outlaws action after the two-day ‘RaceFest’ at West Virginia Motor Speedway in Parkersburg, which was slated to share the Memorial Day weekend WoO LMS spotlight with Beckley, could not be run on schedule due to weather-related delays in its shortening from a five-eighths to a three-eighths-mile layout.

“We’re disappointed that we didn’t get to be part of a big three-day Memorial Day weekend of World of Outlaws racing in West Virginia,” said Williams, “but postponing our event was the right thing to do for the race teams and fans after West Virginia Motor Speedway announced that their track work wouldn’t be done in time. There was no sense in making everyone tow all the way here for one race.

“Fortunately we were able to work with the World of Outlaws to reschedule the race, and now we’re all excited about July 27.”

Beckley’s program, which will be topped by a 40-lap A-Main paying $8,000 to win, will lead into the now one-night ‘RaceFest’ on Sat., July 30, at the reconfigured WVMS. The tour’s annual stop at Eriez Speedway in Hammett, Pa., will complete the stretch of racing on Sun., July 31.

The Beckley card will be preceded on Tues., July 26, by the inaugural WoO LMS event at Dog Hollow Speedway, a three-eighths-mile oval located about 70 miles east of Pittsburgh. The track’s founder and promoter, Jim Michny, reached out to WoO LMS officials to inquire about the possibility of Dog Hollow serving as a replacement for the tour’s canceled July 27 event at Central PA Speedway in Clearfield and an agreement was quickly reached.

“I’ve been thinking about bringing the Outlaws in here for a few years, so when I saw that the Central PA race was called off I thought that maybe it was time to go for it,” said Michny, whose mid-week show will run over the 40-lap distance and pay $8,000 to win. “I’m excited about it. I think we’ve got a track that these big guys will really fly around and put on a great show for the fans.”

Tri-City Speedway, meanwhile, joins the series to form an attractive Midwestern doubleheader that ushers in the fall season. The tour will compete in a 50-lap, $10,000-to-win event at promoter Kevin Gundaker’s track on Fri., Sept. 16, before crossing the Mississippi River to contest the Pepsi Nationals on Sat., Sept. 17, at I-55 Raceway in Pevely, Mo.

“We’re really looking to our September World of Outlaws event,” said Gundaker, a former standout dirt Late Model driver who is in his seventh year at the helm of Tri-City Speedway. “It’s going to be a great weekend for World of Outlaws drivers and fans with races on consecutive nights at tracks less than 60 miles apart.”

Gundaker is expected to soon announce a sponsor for his WoO LMS program, which brings the tour to the track outside St. Louis for the first time since Aug. 1, 2004, when Darrell Lanigan of Union, Ky., emerged victorious. The ’04 date, however, was run on Tri-City’s old half-mile oval; Gundaker shortened the speedway to a three-eighths-mile layout prior to the 2008 season.

In related news, the WoO LMS ‘Wild West Tour’ event scheduled for July 14 at Superior (Wis.) Speedway (now Amsoil Speedway) has been canceled. The announcement resulted from unavoidable logistical issues associated with the Head of the Lakes Fair, which runs from July 12-17 on the same property as the racetrack.

“We were really looking forward to hosting a World of Outlaws Late Model Series event this year, but after analyzing the situation we determined that it would be too difficult to run the race while the fair was also taking place,” said Joe Stariha of Head of the Lake Management Group’s Lake Head Racing Association, which is operating Amsoil Speedway in 2011. “With so many race fans expected to come to the track on the same night that a big cattle auction is scheduled for the fair, there just wouldn’t be enough parking to handle the crowd.

“Tim (Christman) and I worked very hard to come up with another date for the race, but logistically it just wasn’t in the cards to do it this year. We definitely have it in our plans to book a World of Outlaws Late Model Series race next year.”

Christman said the possibility remains for another track to assume Superior’s date on the Wild West Tour, which currently boasts six events from July 8-19 at tracks in Oklahoma, Iowa, Minnesota, North Dakota and Wyoming.

More info on the new WoO LMS events can be obtained by logging on to the track Web sites at www.beckleymotorsportspark.com, www.dog-hollow.net and www.tricityspeedway.net.