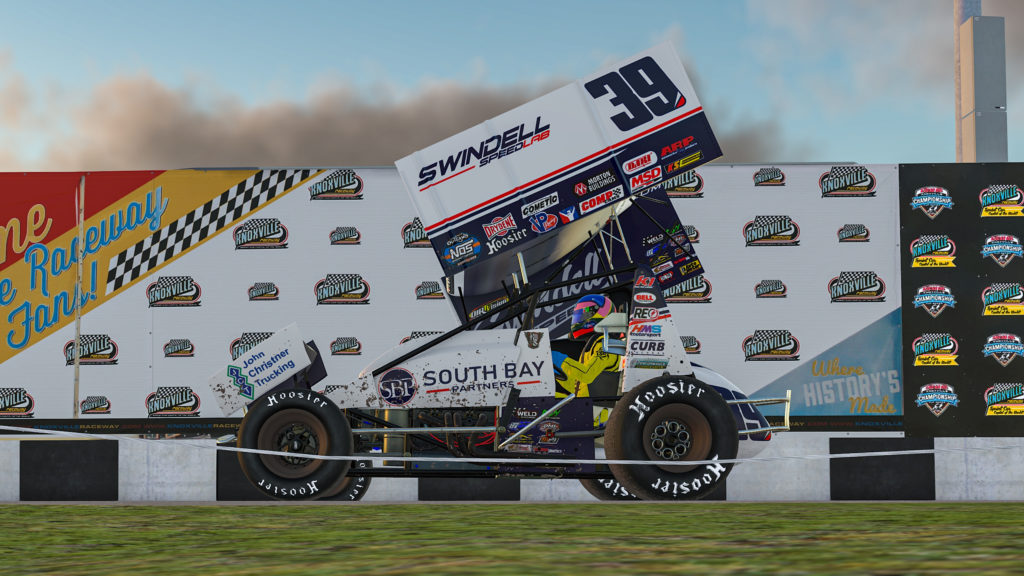 Holy hell I have chills right now.@knoxvilleraces was where everything changed for @KevinSwindell and @JoSwindell five years ago.

How fitting is it that tonight, on @FS1, is where he gets it back and returns to victory – even if it's in simulation?#WoOiRacing | #DIRTTogether

Sorry everyone … virtual burnout of the year award already has a winner. Kevin Swindell: https://t.co/RlU6VjULvS

Cool to see @KevinSwindell get to victory lane. 😎👍

Just want to say congrats to my buddy @KevinSwindell on his @WorldofOutlaws win tonight on @FS1 ! You spanked us. You don’t know how cool it is to share the track with you again👍🏻 #BulldogStrong

My dude @KevinSwindell gettin that @iRacing dub @knoxvilleraces of all places!! Happy happy happy. Dinner in the kitchen is on me.

Best thing I’ve watched in awhile! This no sports is killing me, but @iRacing had helped tremendously! Loved watching @KevinSwindell win it at @knoxvilleraces pic.twitter.com/aeFApFLTB0

Then the post-race driver reports rolled in, first it was the drivers in the World of Outlaws NOS Energy Drink Sprint Car Series iRacing Invitational …

Fun race tonight on @FOXSports with the @WorldofOutlaws ended up P3! Thanks to everyone involved for making this happen! Hope it was as fun to watch as it was to race. pic.twitter.com/hW0miDqPXo

Man! We were good tonight! One mistake cost me! REVIEW: pic.twitter.com/QxAtc3LTkC

Man I feel like I let the Posse down tonight. I was way to good way to early! I didn’t need that last caution. Fun racing with @KyleLarsonRacin and @KevinSwindell Congrats on the win Kevin! @FOXSports @WorldofOutlaws #WoOiRacing #RacingTogether

Got crashed under yellow while running 3rd. Still a great time racing on @iRacing with the @WorldofOutlaws

The 🏁 is out in the @iRacing @WorldofOutlaws Sprint Car portion at @knoxvilleraces!

After running in the top-10 early, @jpmontoya finishes up 17th in his virtual dirt debut. #WoOiRacing | @Snapon_Tools pic.twitter.com/P4SEnK9IlV

Gave that one everything I had. Man I wanted it bad. Awesome to see @CoreyGordon23 get him one tonight though! I hope y’all enjoyed the show! Let’s make it happen again#WoOiRacing #RacingTogether @WoOLateModels @iRacing @FS1

Ended up finishing 3rd in the @WoOLateModels invitational. Can’t think @DirtDraft enough for the support and hope everyone can go check out the app. Thanks to all my sponsers and everyone supporting me .

Dude!!! I was grinning ear to ear running with ya!😝😂 https://t.co/IOaXPCCGhB

Hopefully one day I learn to grid on time lol. Thanks to @WoOLateModels that was a blast can’t wait for the next one. @iRacing

Update: power came back on & internet restored just in time to enter the race! Didn’t get to practice much & went backwards but still finished in the top 10. I’ll take it 😁 #WoOiRacing

Then the fans presented their observations about the night’s action …

Watching @jpmontoya, @RonCapps28 and @BubbaWallace in a @WorldofOutlaws race live on @FS1 is not something I expected would happen in 2020. #WoOiRacing

Love @BubbaWallace. Sunday wasn't his day, but has a lot of fun keeping it all in perspective on Wednesday night doing dirt #WoOiRacing hell yeah.

@BubbaWallace and @ClintBowyer is the #Bromance you didn’t know you needed. #WoOiRacing #NASCAR

While it might just be a game, Logan Schuchart is making the most of a chance to get behind the wheel of a sprint car again.

The Hanover native has posted a pair of top 5 finishes at the first two @WorldofOutlaws @iRacing events & is happy to be racing.https://t.co/55n4XmVng7

RECAP: @KevinSwindell made a triumphant return to victory lane with a dominant late-race performance in the @WorldofOutlaws @iRacing Invitational on @FS1 Wednesday night @knoxvilleraces –> https://t.co/lYsZlKOXf2