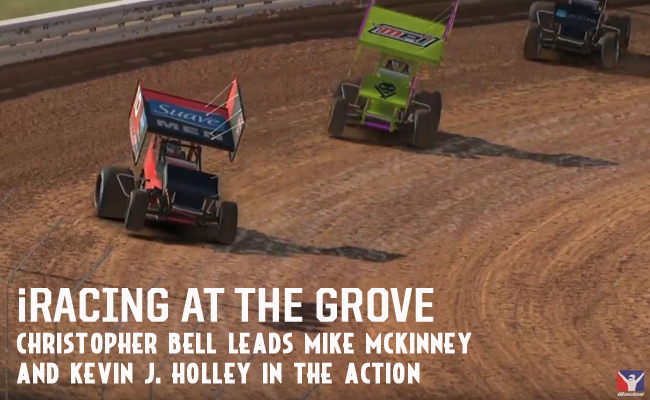 Christopher Bell led from start to finish at Williams Grove last night to win iRacing’s weekly World of Outlaws Craftsman Sprint Car Series feature. But Bell’s victory wasn’t as easy as it looked. Despite grabbing the pole position and leading the first 27 laps, the NASCAR Camping World Truck Series competitor faced one final hurdle in the form of a Lap 29 restart following a caution that put Mike McKinney right on his bumper.

In the wake of a runner-up finish last week at Volusia Park Speedway, McKinney had a little extra motivation to get the win. But Bell sealed the deal with a storming restart, pulling clear of McKinney and third placed Kevin J. Holley to take the win.

While Bell deservedly took home the laurels, when it came to the drive of the race he finished in a dead-heat with Logan Seavey. Winner last week at Volusia, Seavey started last in the 13 car field after blowing his qualifying run. No matter, the Californian clawed his way through the field to run P6 when the second of two caution flags waved on Lap 27.

Given a last chance at a podium finish, Seavey stormed past Stephen Moore on the restart, then displaced Phillip Diaz on the final lap before he ran out of race and was forced to settle for fourth.

Diaz and Moore came home fifth and sixth, respectively, with Joe Letteriello the seventh and final sim racer on the lead lap.

Next Monday the world’s best dirt track sim racers head to Eldora Speedway for another round in iRacing’s World of Outlaws Craftsman Sprint Car Series. Be sure and check out all the sim racing action at the “World’s Greatest Dirt Track” on iRacing Live and DIRTVision.com starting at 8:30 pm Eastern time (00:30 GMT Wednesday) on Monday, May 1.