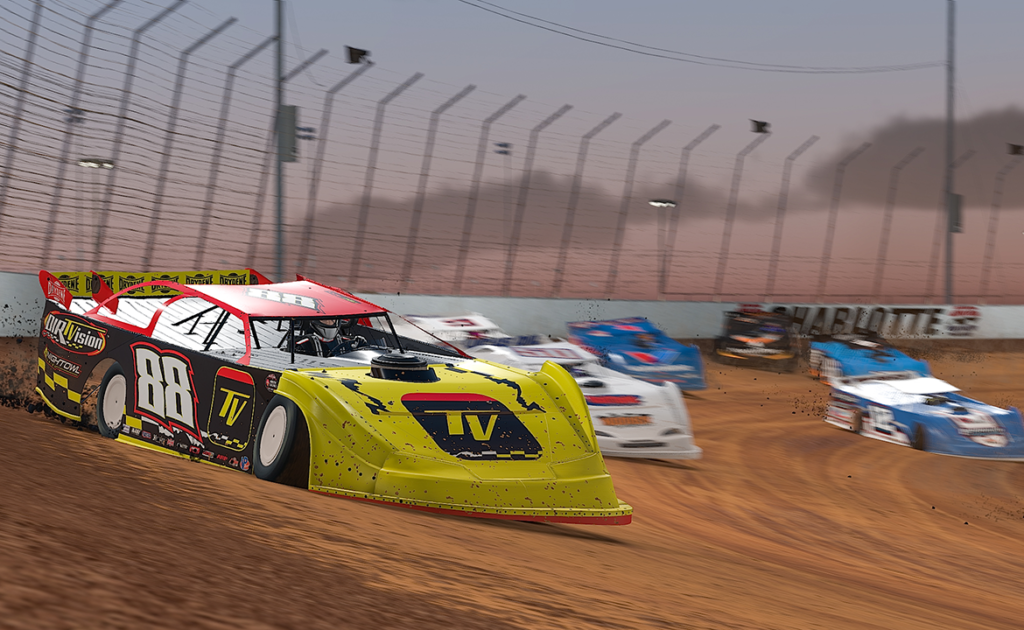 CONCORD, NC – While sim rigs and iRacing have replaced actual race cars and grandstands the past few weeks, they have created opportunities for racers around the world to compete against some of the biggest names in the sport.

Now, with events like tonight’s nationally televised World of Outlaws Invitational at 8 pm on FOX Sports’ FS1 Network, many drivers are racing on the biggest stages they’ve seen and taking full advantage.

One driver turning heads is Trent Ivey, a 25-year-old Dirt Late Model racer from Union, SC, affectionately known as The Lil Headknocker. Ivey is now in year two of Super Late Model competition after gaining several years of Pro Late Model experience behind the wheel of his Ivey Construction #88 Longhorn, featuring the Chevrolet Performance Crate engine. Last Wednesday night on FS1, Ivey took to one of his favorite real-life tracks — The Dirt Track at Charlotte — and wheeled his virtual DIRTVision-sponsored car to the World of Outlaws Morton Buildings Late Model iRacing Invitational victory for his 14th career iRacing win on dirt.

Ivey is certainly no stranger to The (real) Dirt Track or its Victory Lane stage either, having competed in all four Pro Late Model events at the speedway’s World Short Track Championship and winning the 2015 Late Model Circle K Shootout as part of the World of Outlaws NOS Energy Drink Sprint Car Series event at the venue. He also competes with the real-life World of Outlaws Morton Buildings Late Models when the tour comes to Charlotte for the Can-Am World Finals in November, in addition to various other tracks around the Southeast.

But before he ever climbed atop his car in Victory Lane, Ivey’s road to becoming a local favorite started a generation before him, with his father, Petey Ivey.

A young boy himself, Petey worked at his father’s scrapyard and soon built a racecar out of a junkyard car to hit the local tracks with. His motorized creation soon took on the nickname The Headknocker, which later spawned his racing nickname and, thus, Trent’s adaptation of it. After years behind the wheel and moving up the ranks, Petey inherited his father’s growing construction business (Ivey Construction) and became a Super Late Model regular around the Southeast.

“He just stayed with it, about like I did, running the small classes and ended up getting to a Late Model, and that’s when he really started,” Ivey said. “He got a big rig, then he got two Barry Wright Chassis and then he got two Clements motors. I guess you just stay with something mediocre so long, you’ll eventually get what you want.”

Trent got behind the wheel of his first racecar at the humble age of 13 — a four-cylinder young-gun class for the beginners around his local tracks. After a few seasons, he was about ready to give it up, citing a loss of interest. So, what did father Petey do?

“I told him, ‘I don’t know if I want to do this anymore or not,’ and he said ‘Good, because I just went out and bought you a Late Model,’” Trent detailed in an old conversation with his dad. “So, he comes home with a brand-new Rocket [Chassis], and I began racing Crates. That’s when I started liking racing, because that’s when I felt like I was following in his steps of being a Late Model racer.”

Now with nine years of Crate engine Late Model experience under his belt, Ivey’s accomplished many things and proved himself worthy of moving up the ranks, which he did full-time just last year.

2019 was Ivey’s rookie season at the controls of a Super Late Model around his home track of storied Cherokee Speedway in Gaffney, SC. Garnering two wins at the track in regional competition, Ivey said he’s learned a lot from moving up, and it’s made him a more well-rounded pilot.

“Driving a Crate and then going to a Super and making sure I do everything I can behind the wheel has helped me the most,” he said. “A lot of people say that Super Late Model experience helps in driving a Crate car. I say it’s the opposite. In a Super, you’ve got all this motor and you can get yourself out of trouble. But with Crates, you’ve got to hit it perfect if you’re going to be the man to beat.”

Now a two-time South Eastern Crate Association (SECA) Late Model champion after his second crowning in 2018, Ivey’s had a chance to race at several tracks in his region. But to him, there just isn’t anything like The Dirt Track.

“Charlotte’s a big venue, and everybody likes to go race there,” he said. “But I like the track the most. Charlotte’s unique because you can race all over it. You get to see who really can drive.”

Ivey also ran third in a 75-lap, $50,000-to-win event at Virginia Motor Speedway last September, showcasing his versatility in the fendered ranks. But his diverse racing skills aren’t the only pages he has in his playbook.

“I started working there as soon as I got out of college; I just did a two-year business degree [at the University of South Carolina]. But as soon as I got out, he started letting me run the business and fell back as the owner. He runs around and sets up the jobs, then I have my crew and we go and do all the work,” Ivey said.

So far, he’s got five years of experience as a carpenter on the crew and works Monday through Friday for the family business. On weekends, though, he said it’s all about racing and wrenching on the cars. That said, a round of golf and a nice tennis match do suit him well during the summer months, too.

Ivey got into iRacing right when the dirt expansion was launched in the Spring of 2017. Racing on what he describes as a “1970s-ish” table, with a basic wheel-and-pedals set, a single computer monitor and a nice new gaming computer (which he very recently acquired after his previous computer crashed coming to the green in last Monday night’s Feature at Charlotte), Ivey has quite obviously been spending much more time recently in his roll-around computer chair in preparation for the big-time iRacing events.

Now, he’s caught right in the spotlight of one of the biggest things to hit iRacing: nationally televised events. With his shiny, new DIRTVision paint scheme aboard his #88, keep an eye out for this Late Model guru on Wednesday night as he looks to become the first repeat winner in World of Outlaws iRacing Invitational competition.